Gibson Mausoleum in the churchyard of St Nicholas, Sutton 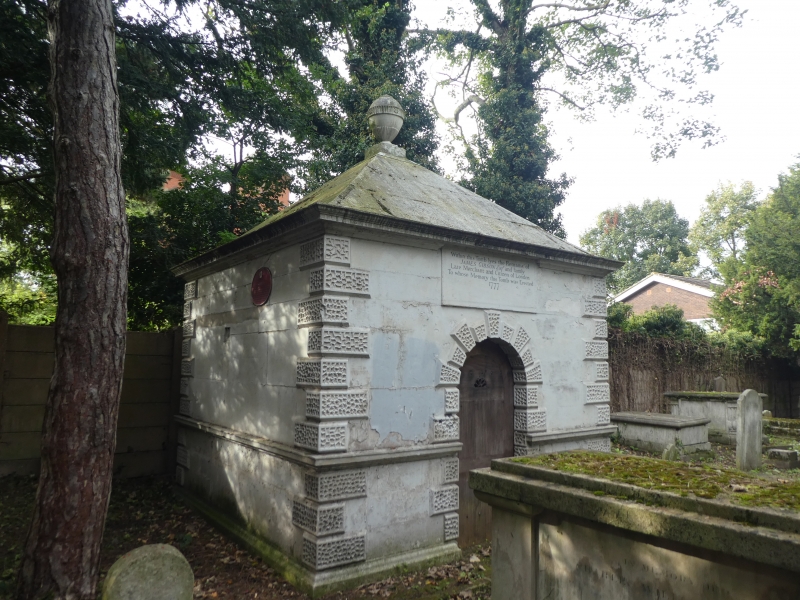 Mausoleum. Erected 1777 in neoclassical style to contain the remains of James Gibson, London wine merchant, and his family. It is probably the work of a mason rather than architect. The mausoleum was erected at the expense of the eldest daughter, Mary Gibson.

Mausoleum. Erected in 1777 in neoclassical style to contain the remains of James Gibson, London wine merchant, and his family. It is probably the work of a mason rather than architect. The mausoleum was erected at the expense of the eldest daughter, Mary Gibson.

PLAN: a square, single-storey 12 foot cube with a central entrance in the east side leading into a single burial chamber.

The east side has a central round-headed entrance with a 'Gibbs' surround' and a 1920s or 1930s wooden door with a probably original small semi-circular ventilation grille with metal cames filled with coloured glass. Above is a tablet bearing the inscription: 'Within this tomb lyes the Remains of / James Gibson Esq. and family / Late Merchant and Citizen of London / To whose Memory this Tomb was erected / 1777.

The south side has a C20 oval metal 'Heritage in Sutton' plaque, giving James Gibson's birth and death dates and stating 'In accordance with the wish of the last of the Gibson family, Miss Mary Gibson (c1730-1793), the tomb is subject to an annual inspection on August 12th.'

The pyramidal roof is surmounted by a central neoclassical urn.

INTERIOR: there is a plain domical vaulted roof and a York stone flagged floor. Along the north and south sides are hexagonal Portland stone sarcophagi on raised Portland stone feet and there are also five hexagonal-shaped wooden coffins with metal plaques.

The manor of Sutton belonged to Chertsey Abbey from before the Norman conquest to the Dissolution when it passed to a succession of mostly non-resident owners. In the C18 the village became a coaching stop on the route to the races in Epsom and then Brighton and by 1800 it was a small village sprawling up the hill from the common (now the Green) to the Cock Cross Roads. The arrival of the Sutton to Epsom railway in 1847, the Epsom Downs line (1865) and the more direct line to London via Mitcham Junction (1868) led to rapid change. Middle class development took place at Benhill and in the area the area around the railway station, while Newtown, east of the High Street, was more working class. The High Street shops developed quite rapidly, probably largely in the 1870s and 1880s and by 1900 Sutton was a small commuter town in the countryside beyond London. In the 1920s and 1930s whole area was engulfed by suburban development.

The Gibson Mausoleum was erected in 1777 for James Gibson (c1706-1776), London wine merchant and Master of the Worshipful Company of Ironmongers, and members of his family by his eldest daughter, Mary Gibson (1730-1793). Her parents had both died in 1776 and had been buried in St Nicholas churchyard but Mary used some of her inheritance to erect the mausoleum and re-inter her parents within it.

The stone coffins without inscriptions along the north and south sides of the mausoleum contain the remains of James Gibson on the north side and his wife Martha on the south side. The five lead-lined oak coffins all have lead coffin plates. No 1 on the floor adjoining the north stone coffin contains Jane Martin (d 1764), a presumed sister of Mary Gibson, and Jane Leach (d 1769) probably a cousin, both re-interred when the Mausoleum was built. No 2 on the floor nearer the south stone coffin contains Mattthew Gibson, brother, business partner and executor to James Gibson (d 1773). No 3, a large coffin on top of no 2, contains the remains of Martha Wood (d 1793) also a daughter of James Gibson. No 4 on top of the south stone coffin contains the remains of Elizabeth Gibson (d 1787) another daughter, who left a legacy of £50 for the upkeep of the tomb. No 5, on top of the north stone coffin, contains the remains of Mary Gibson (d 1793) the last of the family to be interred here, who left a legacy of £5,000 on trust to the Governors of Christ Hospital, the interest to be used for the upkeep and an annual inspection of the mausoleum. The Governors and Guardians of Christ's Hospital were made responsible for any repairs.

The two bequests are set out on painted boards in St Nicholas Church.

The mausoleum was described in 'A Topographical History of Surrey' by EW Brayley (1844) as being 'inclosed by iron railings' but these are no longer present.

In the 1920s small ventilation grilles were inserted on three sides of the mausoleum.

The Gibson Mausoleum, a mausoleum of 1777, is listed at Grade II for the following principal reasons:

* As a good quality C18 neoclassical-style mausoleum which is unaltered apart from the loss of its railings;

* Mausoleums are a relatively rare building type nationally and this is particularly so for Georgian examples as here.

* part of a related group with the Church of St Nicholas and a number of historic tombstones in the churchyard.