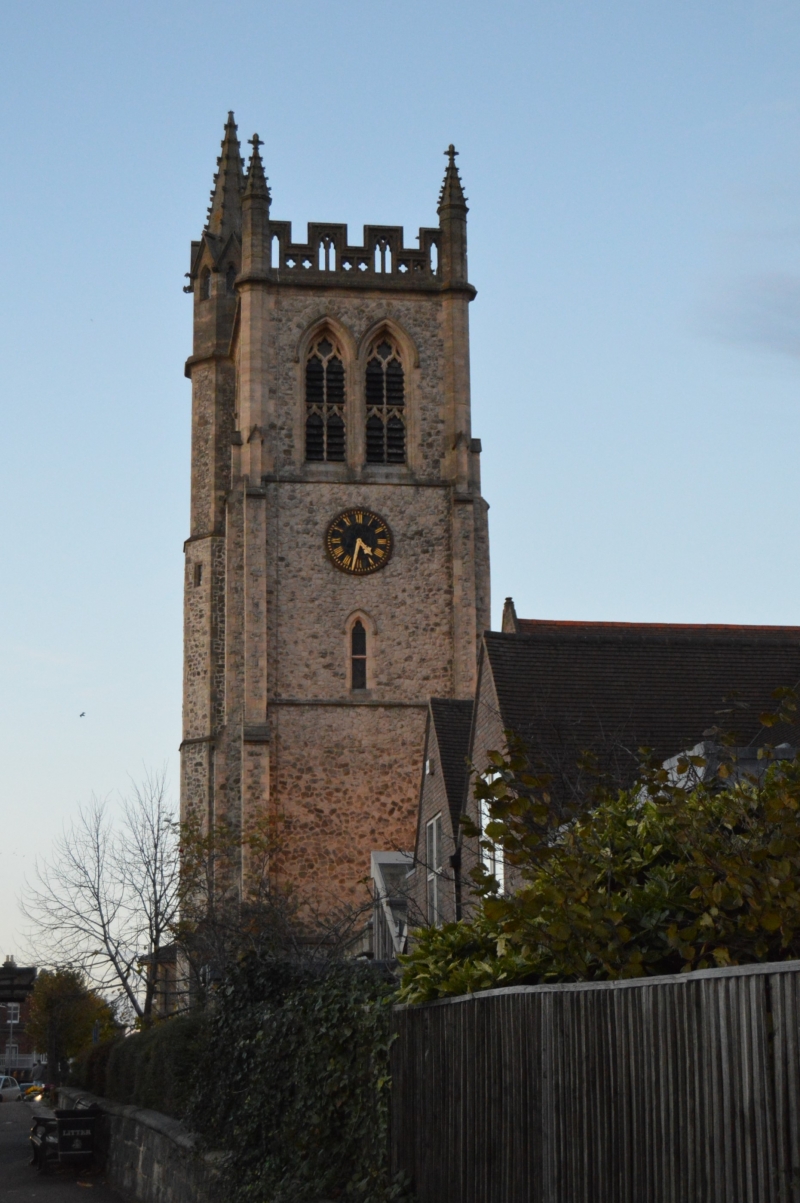 1858 by A D Gough (sanctuary and transepts). 1864: N transept extended. 1871 N aisle by E E Cronk. 1896 E E Cronk junior built the S aisle, W tower, and flanking porch passages and reroofed the church. Late C20 reordering and early C21 church hall attached to the S side. The late C20 extension on the south side was replaced circa 2004.

EXTERIOR: The style of this multi-phase church is Decorated work of the C14, often very freely treated. The W end is the show front with a four-stage tower with a pierced, embattled parapet with pinnacles, and a hexagonal NW stair turret rising above the top of the tower and culminating in a crocketed stone spirelet. Above the moulded W doorway there is a large circular window with very florid tracery under an ogee hoodmould. The belfry lights are pairs of two-light reticulated windows with a transom. The aisles are under their own gables and have highly unusual Decorated tracery in their W windows which are set above the porch passages which span the width of the church. The aisles are of five bays and have side windows with three-light Decorated windows: there are buttresses with offsets between the bays. The transepts have five-light windows in their N and S faces, again with florid Decorated tracery. Attached to the N transept is a small porch in the centre of the N wall and a stubby octagonal stair-turret at the NE corner under a pyramidal roof. The E end of the church has complex, irregular massing and a five-light E window, once again with Decorated tracery. A large vestry block is set at an angle to fit into the site. A plaque records the consecration date of 1858 recording that the freehold of the land was given by the Conservative Land Society.

INTERIOR: The interior walls are plastered and whitened. Arcades to the nave lead to very wide aisles. The arch heads are moulded and the piers are round and have foliage capitals and moulded bases. There are two three-light windows set in the roof. At the W end the tower arch is broad and high and is of four orders. A plainer arch leads into the sanctuary. The 1896 roof in the nave is of arch-braced queen-post construction and is carried on stone wall shafts with carved capitals on carved corbels. The roof spandrels are cusped and the arch-braces intersect at the crossing. In the sanctuary there is a common rafter roof, painted white.

PRINCIPAL FIXTURES: The C19 seating has been removed and late C20 chairs substituted. At the E end there is a late C20 stepped timber platform into the crossing. In the N transept there is a C19 raked gallery and there is a further, but C20, gallery at the W end projecting in front of the tower arch with a metal and timber stair to it from the nave. The late C19 font has an octagonal bowl carved with rosettes and trefoil-headed arches and with marble shifts to the base. It has a pierced timber font cover. There is no pulpit. The E window is of 1893 and is by C E Kempe. Monuments include various C19 brass wall tablets.

HISTORY: For a relatively modern church St John's has a complex building history with little remaining from the original church of 1858 (and which was probably begun in 1857). This was planned to have seating capacity of 465 and was estimated in 1857 to cost £2,600: the final cost rose to £3,044. The church originally had a S tower and spire. By the end of the C19 is had become a capacious building, the most notable architectural feature of which is probably the very florid and inventive tracery in some of the principal windows. Alexander Dick Gough (1804-71), a London architect, was a pupil of B D Wyatt and was a partner of Robert Louis Roumieu (1814-77) from 1836 to 1848. Edwyn Evans Cronk senior was joined by his son (of the same name, b 1846) as a partner. Cronk junior was articled to his cousin H H Cronk who practised in Tunbridge Wells.

REASONS FOR DESIGNATION:
The church of St John is designated at Grade II for the following principal reasons:
* It is a large, multi-phase Victorian church, opened in 1858 and with extensive additions and remodelling until 1896 which are architecturally conservative for their date although with some unusual detailing.