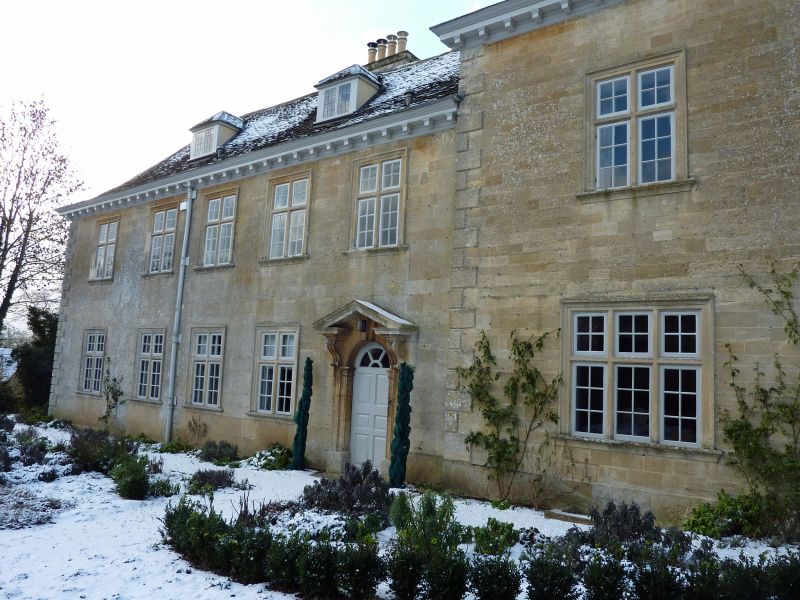 Parsonage house. c.1700, extended c.1847 and later. The older front is
in freestone the newer in cut and squared rubble; wooden modillion eaves
cornice; hipped Cotswold stone roof. Residual cross-passage plan from
pre - 1700 house. L-shaped; the taller right hand gabled wing is an
addition, it dates from c.1847 and matches the c.1700 block in details to
front. Large ashlar off-ridge chimneys. 2 storeys and attics, chamfered
quoins 2:1 hipped dormers with leaded lights. 5:1 windows with bull-nose
cills, moulded architraves and cross mullions with edge hollow chamfers,
some indication that the central ground floor window may have been a
doorway. Arched doorway to right of main block with panelled piers to
brackets, moulded imposts and arched fanlight with triple keystone,
panelled door. Return to north in rubble with flat-arched glazing-bar
sashes. South return has a 2-storey 2-bay mid-C19 extension. Rear
irregular with various C20 additions and a shallow gable over the stairs.
Interior: the c.1700 block was extended to north by the present kitchen
wing which apparently in c.1847 replaced a timber-framed structure; at the
same time it was extended to west with a corridor and stair-hall linking
with the S.W. wing and giving access to the S.E. room; this appears to
incorporate what may have been an earlier stair-turret (see concealed
plaster behind present buttress) but its position behind the main c.1700
chimney stack may have rendered communication difficult for stairs. The
alternative position would be in the present wide cross-passage. The S.E.
room has raised and fielded c.1700 panelling and a moulded stone fireplace
with flattened bolection moulding; overmantal framed by pilasters with
Greek-fret ornament. Adjacent room has re-used C17 panelling (reputed not
very believably to have been made from the old horse-box pews of the
church when they were stripped out in 1869); similar fireplace to S.W.
room. Roof structure interesting: it appears to be made up of older
timbers, square ridge. In the centre part the ridge is massive and
partially supported by a brace from the collar of the central truss. The
presumed development could therefore be a timber-framed house one side of
which was upgraded c.1700 to a proper Parsonage house,perhaps leaving the
stairs in the surviving portion. The latter is known to have been cleared
c.1847 and replaced by the present north wing, at the same time the stair
corridor was added at the west, perhaps re-using an earlier rear wing.