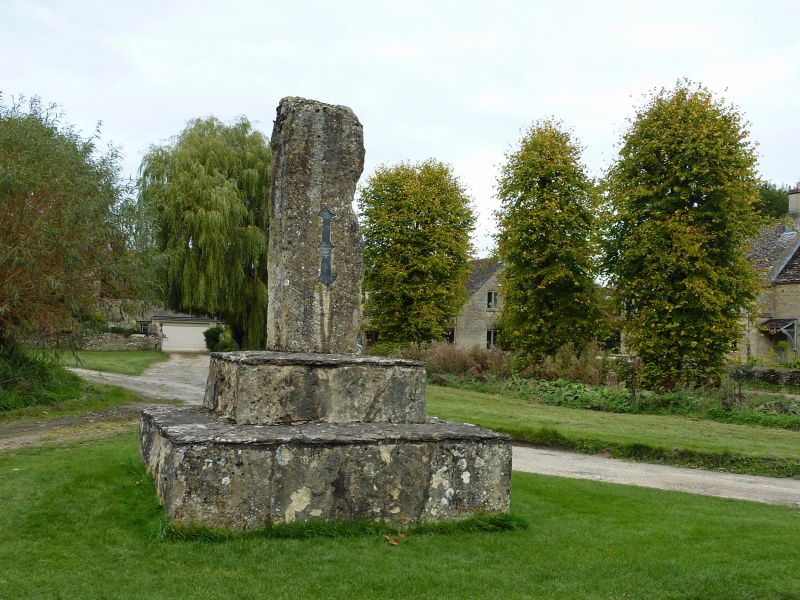 The memorial stands on the north side of the main road through Westwell village, alongside the old sheepwash pond and c110m to the north of the Manor House where Mrs Holland, sister of the commemorated men, lived. Many of the surrounding buildings are listed, including the Manor House and Old Rectory (both Grade II*) and the Church of St Mary (Grade I). The memorial takes the form of a large limestone monolith rising from a deep, two-stepped, limestone base. The upper surfaces of the base steps are flagged with slabs to provide regular surfaces for the placement of floral tributes and wreaths.

The salvaged brass numeral from Ypres Cloth Hall is fixed to the front face of the monolith, overlooking the main road. This Gothic figure has been inscribed at its centre with the dedication, reading ERECTED BY/ STRETTA AIMEE HOLLAND/ IN MEMORY OF/ HER BROTHERS/ LT HAROLD S PRICE/ ROYAL FUSILIERS/ LT EDD JOHN PRICE/ RN. At the head of the numeral an additional inscription reads TO THE BRAVE/ WHO/ GAVE THEIR LIVES FOR ENGLAND/ IN/ THE GREAT WAR with, at the foot, THIS BRASS NUMERAL/ FORMED PART OF THE CLOCK/ OF THE CLOTH HALL/ AT YPRES.

As well as community war memorials for villages and towns, or corporate bodies and associations, individual memorials were very common. These were most often in the form of commemorative windows, tablets and plaques raised in buildings such as churches, and additions to family grave-markers. Occasionally, freestanding monuments were erected. One such memorial was raised at Westwell as a permanent testament to the sacrifice made by the two members of the Price family who lost their lives in the First World War.

The monument in the centre of the village commemorates Second Lieutenant Harold Strachan Price (b 1881) and his brother, Lieutenant Edward John Price (b 1890). Harold died aged 33 on 24 May 1915. Serving with 3rd Battalion Royal Fusiliers, he was killed in action on the Western Front in an intense German attack during the Second Battle of Ypres. Involving poison gas, the German assault on trenches held by the battalion at Bellwarde Ridge resulted in 536 casualties, ‘probably the worst loss in a day’s battle of any Fusilier battalion during the war.’ Harold’s body was not recovered, so his name is commemorated on the Menin Gate at Ypres.

Edward John Price served in the Royal Navy, a submariner in HM Submarine E15. This vessel was in the Mediterranean for the Gallipoli campaign, and on 17 April 1915 it stranded in the Dardanelles. Some of the crew were captured by the Ottoman Turkish Army, including Edward, who spent the rest of the conflict as a prisoner of war. He died on 16 October 1918, aged 28, at Yozgat, a camp in central Turkey, perhaps during the influenza epidemic that raged there that year. He was buried at Yozgat, but his body was later exhumed and reburied in Baghdad North Gate War Cemetery in Iraq.

Harold and Edward’s sister, Stretta Aimee Holland, caused the memorial to be raised for her brothers. The wife of Sir Reginald Holland, she lived at Westwell Manor. The Cotswold stone monolith came from Heythrop quarry, whilst the stones for the base came from Brasenose Quarry, Headington. The memorial’s brass numeral from the face of the Cloth Hall clock, Ypres, had been salvaged from the building’s ruins by Harold Price after the First Battle of Ypres.

The First World War memorial to the Price brothers, Westwell which stands on the main road through the village, is listed at Grade II for the following principal reasons:

* As an eloquent witness to the tragic impact of world events on a family, and the sacrifice it made in the conflicts of the C20.

* A cyclopean monument of singular and poignant austerity, standing in a prominent position in the village;
* Including a brass numeral from the clock of the iconic Cloth Hall, Ypres, symbolising the destruction of war, time passing, and the hope of resurrection.

* With numerous surrounding listed buildings, including the Manor House and Old Rectory (both Grade II*), the Church of St Mary (Grade I), and the adjacent Manor House garden building, lodge, and garden gates (all Grade II-listed).