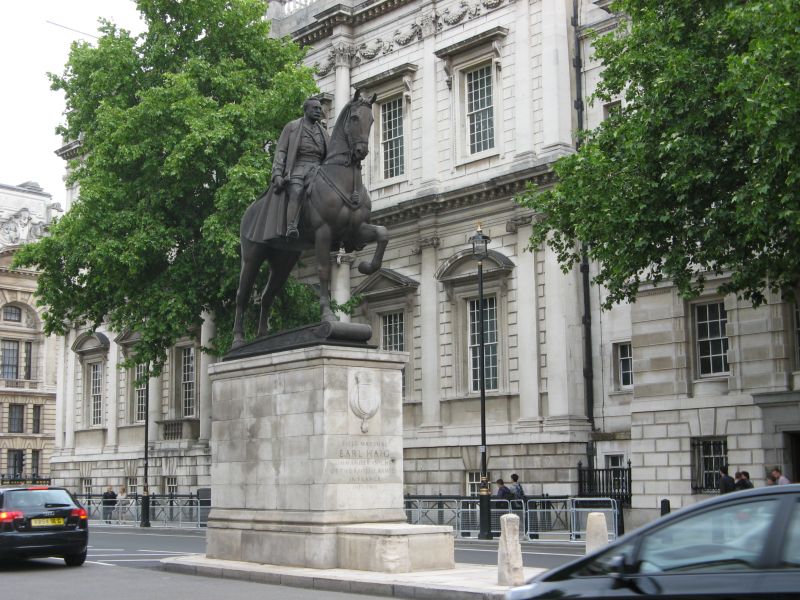 MATERIALS: bronze equestrian statue on a pedestal of Portland stone.

DESCRIPTION: Haig, hatless and wearing an open greatcoat over his uniform, holds a scroll in his right hand. He is seated upon a powerful horse, its hind legs in parallel and its left foreleg raised; the horse’s neck is arched, with its head drawn in on a short rein. The statue stands on a rising bronze base, with anthemion decoration to the front. Signed ‘Alfred Hardiman 1936’ to the front. The pedestal, rounded to the north end, is inscribed on the front FIELD MARSHAL / EARL HAIG, / COMMANDER-IN-CHIEF / OF THE BRITISH ARMIES IN FRANCE / 1915-1918 beneath a cartouche bearing the Haig arms, surrounded by the Order of the Thistle and surmounted with a coronet . On the rear (north) end is the inscription ERECTED BY PARLIAMENT.

Prime Minister Stanley Baldwin suggested erecting a monument to Haig soon after the latter’s unexpected death in early 1928. A limited competition in 1929 was won by Hardiman, but controversy soon arose over the stylized character of the mount: Haig’s widow sought a more naturalistic horse, but Hardiman was supported by George Lansbury, First Commissioner of Works under Ramsay Macdonald, in keeping to his original conception. The memorial was eventually unveiled by the Duke of Gloucester on 10 November 1937.

Douglas Haig (1861-1928), the son of an Edinburgh distiller, rose rapidly as a staff officer to become commander of the First Army in 1914 and was chosen to replace Sir John French as C-in-C in mid-1915. Responsible for leading the British and Empire forces on the Western Front for three years of costly attritional warfare, including the battles of the Somme, Arras and 3rd Ypres, Haig’s reputation remains disputed. However, under his leadership, these forces (the largest ever commanded by a British general) developed ultimately winning ways of fighting the war and he retained the full confidence of the Army (if not of politicians). Haig’s post-war reputation was enhanced by his support for the welfare of ex-servicemen, particularly wounded ones. He was created Earl Haig in 1919, and received a large award enabling him to purchase the estate of Bemersyde in the Borders. Haig, a former cavalry officer, may have died from injuries sustained while hunting. Another equestrian statue to Haig was erected at Edinburgh Castle in 1923.

Alfred Hardiman RA (1891-1949) came from a London family of silversmiths. He trained at the Royal College of Art, the Royal Academy and the British School at Rome, having won the 1920 Rome Scholarship, and was strongly influenced by classical sculpture of a severe archaic character. He was responsible for monumental architectural sculpture on the exterior of London’s County Hall and won the 1929 competition for a statue of Haig. He incurred considerable costs in making repeated adjustments to the Haig statue, and an additional payment of £2000 was eventually made by the Treasury to avert his financial ruin. Haig’s widow had pronounced views on the depiction of her husband, and traditional views took exception to aspects of the sculpture (such as the stylized horse, and Haig’s bare-headed depiction). Other prominent works by him included the heraldic lions at Norwich Town Hall.

The monument is in the guardianship of English Heritage.

The Statue of Field Marshal Earl Haig is listed at Grade II* for the following principal reasons:
* Historic interest: Haig, commander-in-chief of British forces on the Western Front from 1915-18, remains a disputed military figure, given the huge losses endured under his command, but there is no question as to his historical importance;
* Sculptural interest: Hardiman’s sculpture, controversial in its day, can now be seen as a powerful example of inter-war classical statuary which strove to reconcile traditional modes of military commemoration with a contemporary idiom. Strongly rhythmic in outline, the stylized horse contrasts with the closely observed portrait of Haig, and is among the last equestrian statues of a military commander to be erected;
* Group value: prominently located outside Dover House and close to Old War Office, this memorial is one of a sequence of equestrian statues along one of London’s principal routes, leading towards the Cenotaph, Horse Guards, and the heart of government.