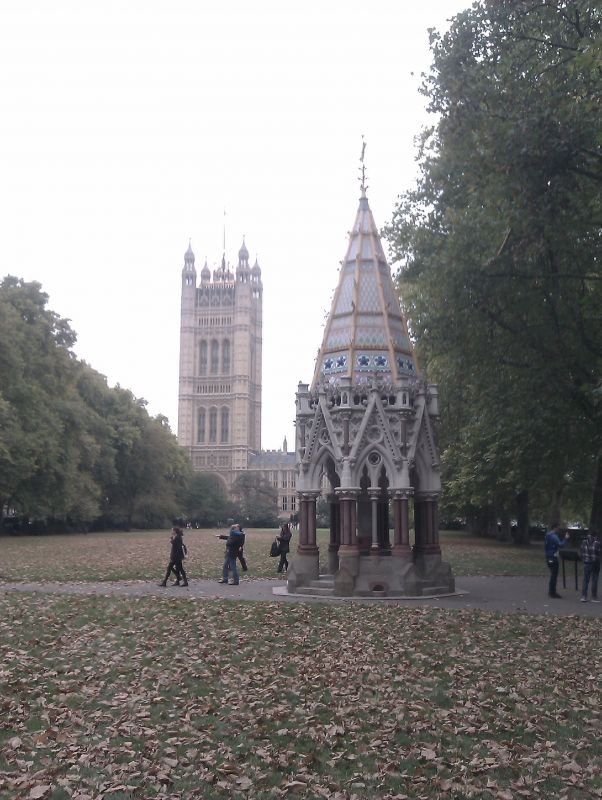 II*
Drinking fountain, erected 1865-6. Designed by Samuel Sanders Teulon, with what appears to have been a considerable creative contribution from Charles Buxton.

Limestone and granite, with an enamelled roof, made by Skidmore, and mosaic decoration. Elaborate and delicate Gothic pavilion with rich use of polychrome materials. Octagonal with pointed arched shafted openings and pyramidal spire-roof of brightly enamelled iron with finial. Inside, four granite drinking basins arranged around a central shaft. Eight metal figures of British rulers, by T. Earp, which once stood at eaves level, were stolen, some in 1960, the rest in 1971. These were recast in 1980, but have since disappeared.

The fountain is no longer working. It was restored by the Royal Parks in 2007.

The original plaques were subsequently removed, and two plaques have been added to the monument in the twentieth century. On the west side a plaque gives an incorrect date for the erection of the fountain: 'Erected in 1835 / by Charles Buxton M.P. / in commemoration of / the emancipation of slaves 1834 / and in memory of his father / Sir T. Fowell Buxton / and those associated with him / Wilberforce, Clarkson, Macaulay, Brougham / Dr Lushington and others'. A plaque on the east side of the fountain reads, 'This plaque / commemorates the / 150th anniversary of / The Anti-Slavery Society / 1839-1989'.

The fountain was originally sited in Parliament Square, but was removed in 1949, and placed in Victoria Tower Gardens in 1957.

HISTORY:
The Buxton Memorial Fountain was erected by Charles Buxton to celebrate the Slavery Abolition Act of 1833, and the achievement of his father, Thomas Fowell Buxton, and his associates, in bringing it about. The Act, which came into force in 1834, made the ownership of slaves throughout the British colonies illegal. Following the abolition of the slave trade in 1807, the men commemorated by this fountain strove to secure the full emancipation of slaves. To this end, the Anti-Slavery Society was formed in 1823, principally by Buxton, Wilberforce, Clarkson and Macaulay.

Wilberforce had been foremost in driving the 1807 Act through Parliament, Clarkson having gathered much of the evidence on which the campaign was built. Buxton, named by Wilberforce as his successor in the fight against slavery, was especially active the second part of the campaign, culminating in the Act of 1833, and in promoting the interests of former slaves in subsequent years. He once observed of himself and his achievements that, 'with ordinary talents and extraordinary perseverance, all things are attainable.' Zachary Macaulay, a prominent campaigner, was for several years governor of Sierra Leone, the colony for emancipated slaves from the United States and Nova Scotia founded in 1787. Henry Brougham, a promoter of abolition, was Lord Chancellor when the 1833 Act was passed. Stephen Lushington, lawyer and MP, was a particularly close associate of Thomas Fowell Buxton's in the anti-slavery movement.

Charles Buxton was the third son of Thomas Fowell Buxton. He served as a Liberal MP for fourteen years, as well as being a partner in the brewing firm of Truman, Hanbury, Buxton & Co, of which his father had been director. He was an amateur architect, and is believed to have contributed to the design of this fountain.

The fountain was erected in Parliament Square in 1865-6, possibly in connection with the abolition of slavery in America at that date. It is thought that Charles Buxton took over the project from the Metropolitan Drinking Fountain Association, which, since its inception in 1859, had wished to build 'a costly and handsome fountain in Palace Yard'. By 1949 the fanciful Gothic design of the fountain had few admirers, and it was removed when the Government redeveloped Parliament Square in preparation for the Festival of Britain. Speaking in the House of Lords, Viscount Simon defended 'a memorial erected in the symbolic heart of the Empire to record one of the greatest Parliamentary events in our history'. In 1957 the fountain was re-erected in Victoria Tower Gardens, where it joined Rodin's sculpture of The Burghers of Calais and a statue of the suffragette, Emmeline Pankhurst (both listed).

REASONS FOR DESIGNATION
The Buxton Memorial Fountain is designated at Grade II* for the following principal reasons:
* An unusual and exuberant example of the work of S. S. Teulon, in association with Charles Buxton
* A notable landmark in an important setting, next to the Thames, and alongside the Palace of Westminster; the colourful Gothic pavillion makes a light-hearted companion to the giant of Victorian Gothic architecture
* Lavish and imaginative use of materials, especially in its enamelled roof
* The fountain is of particular historic interest having been erected to celebrate the Slavery Abolition Act of 1833. The significance of the monument is enhanced by its location; it commemorates one of Parliaments most momentous Acts, and its principal dedicatee is the parliamentarian responsible for ensuring the passage of that Act. This monument was upgraded from II to II* in 2007, the bicentenary year of the 1807 Abolition Act.