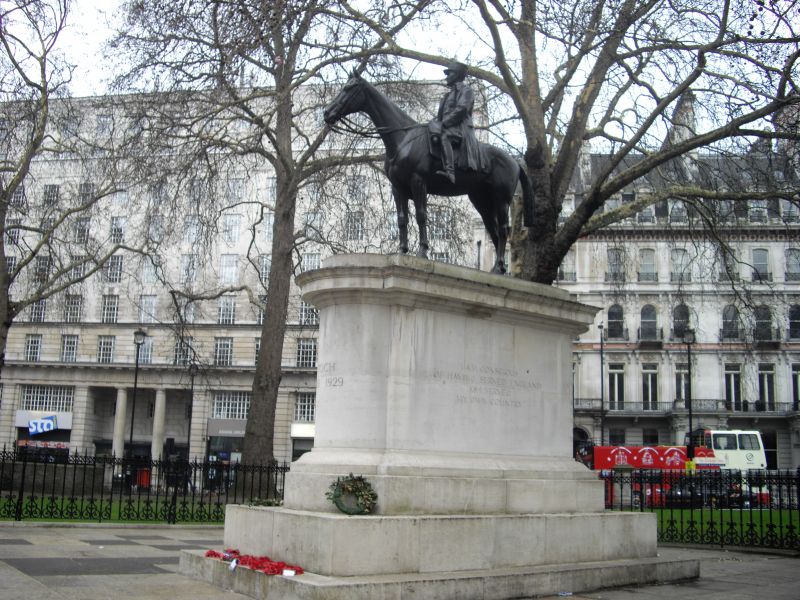 Commemorative equestrian statue to Marshal Foch, 1930, by the sculptor Georges Malissard. The pedestal was designed by the architect P Lebret.

MATERIALS: bronze equestrian statue on a pedestal of Portland stone.

An inscribed bronze plaque was fixed to a sloping stone on the left (west) face of the pedestal but has since been removed and only the stone remains. A stone tablet (included in the listing but too small to map) has been inserted into the paving in front of the statue and is inscribed: CETTE STATUE DU MARECHAL FOCH EST L'OEUVRE DU SCULPTEUR/ FRANCAIS GEORGES MALISSARD (1877-1942)/ ELLE FUT INAUGUREE LE 5 JUIN 1930/ PAR SON ALTESSE ROYALE LE PRINCE DE GALLES

The statue of Marshal Foch was designed by the sculptor Georges Malissard (1877-1942) and the pedestal by the architect P Lebret. Foch is the only French military commander to have been made an honorary field-marshal in the British Army and his standing was ensured by the placing of a statue of him in central London.

Ferdinand Foch (1851-1929) was born in Tarbes in the Hautes-Pyrenees and commissioned in the artillery in 1873. He was appointed commander of the 20th corps of the French army when war broke out in August 1914; he contributed to the victory of the Battle of the Marne (5-12 September 1914) and halted the German advance at the River Yser. He was promoted to commander of the Northern Army Group and saw service during the Somme offensive in 1916. He was made Chief of the General Staff in 1918 and subsequently Commander of the Allied Armies. He put into operation a successful counter-offensive against the Germans along the Marne River. In August 1918 he followed this up with a series of operations which led to the Germans seeking an armistice in November 1918. For this reason, Foch was credited with masterminding the victory over Germany. His stature in French military history was assured.

After Foch's death, Lord Askwith, a sometime lawyer and industrial administrator, suggested a statue should be raised to Foch by the British people. In 1929 the Foch Memorial Committee decided to erect a replica of the equestrian statue by Georges Malissard which had been unveiled in 1928 at Mont Cassel, between Lille and Calais. The Committee asked the Duke of Westminster if they could place the statue on his land at Grosvenor Gardens and he agreed that it could be sited at the northern end. When Malissard came to London he insisted that the statue be placed at the southern end where it would be seen by all Frenchmen arriving in London (Victoria Station is nearby) and by the guardsmen marching to and from Chelsea Barracks.

The statue was unveiled on 5 June 1930 by HRH Prince of Wales. In 1952 the gardens were redesigned in the French style with the statue now being set within a rectangular enclosure. The statue was re-dedicated with the Ambassador of France in attendance. The statue was listed at Grade II on 24 February 1958. The enclosure design was modified to that of today (2016) sometime after 1979.

A inscribed bronze plaque was fixed to a sloping stone on the west face of the pedestal but has since been removed and only the stone remains. A stone tablet bearing the same inscription has been inset into the paving in front of the statue to replace the missing bronze plaque.

The Statue of Marshall Foch, Lower Grosvenor Gardens, is listed at Grade II* for the following principal reasons:
* Historic interest: Foch, is the only French military commander to have been made an honorary field-marshal in the British Army. In August 1918, he commanded a series of operations which led to the Germans seeking an armistice in November 1918. For this reason, Foch is credited with masterminding the victory over Germany. There is no question as to his historical importance;
* Sculptural interest: by a noted French sculptor, the memorial is of high quality and is a rare example in England of a continental commemorative statue;
* Group value: prominently located in Lower Grosvenor Gardens, the memorial has group value with the surrounding buildings: 23-47 and 36-50 Grosvenor Gardens (Grade II) and the Grosvenor Hotel (Grade II*).