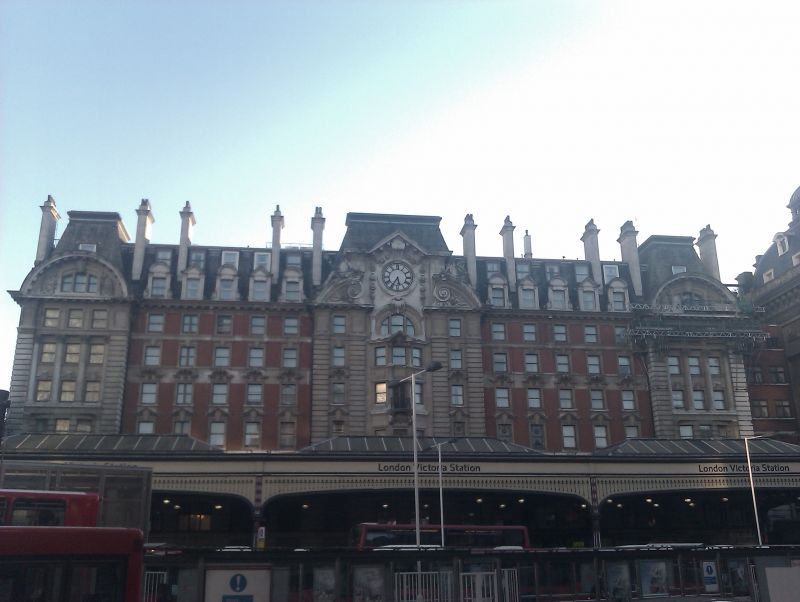 Railway Station Terminus. 1906-8 with minor C20 alterations. Designed by the railway company's Chief Engineer, Sir Charles Morgan. Imperial Baroque Revival version of the French Renaissance style.
Main street elevation 9 storeys with 2 storey ashlar basement. 5 main storeys, over bottom 2 storeys obscured by projecting iron and timber canopy, plus 2 further attic storeys in the mansard roof. Nineteen bays wide arranged, 3 : 5 : 3 : 5 : 3, with the ashlar centrepiece and end pavilions set slightly forward, the plain sections of five windows being in red brick with stone bands and cornices; windows of two widths, either 2 over 2-pane or 3 over 3-pane sashes. Lower 2 floors under canopy supported on 3 posts at front, with steel and glass roofs and timber valancing. The openings and shops have been considerably altered in recent years. Above the canopy is a floor of windows with keyed heads, then one with pedimented heads, then smaller keys, then plain architraves; pedimented heads to the lower attic floor and plain above. The outer pavilions have large segmental pediments. The central attic feature has bowed central windows and an elaborate broken pediment with clock above. This is set against a tall French pavilion roof, as are the end ones, plain mansards between each with 4 tall stacks with weathered caps, and a further stack at each end. The clock is flanked by wreaths and female supporters reclining on the pediment scrolls.
The rear wall cannot be seen except for the 2 storeys of offices, red brick with stone bands, within the concourse. The upper hotel floors are not intended to be seen.
INTERIORS, ground floor interiors are altered. The railway offices on the first floor were not inspected. The upper floors are part of the Grosvenor Hotel and are some 150 bedrooms, bathrooms etc. These were not inspected.
Station Concourse, 1906-8 also designed by Sir Charles Morgan.
The concourse has five ridged roofs running back at right angles to the building supported on cast iron Corinthian columns and on the surrounding buildings. The columns support deep lattice girders running under each gutter and these support light steel trusses.
This roof originally continued over the platforms, but has been truncated in the 1990's and now covers only the head of each platform.
Many late C20 additions have been inserted into the concourse.

History: Victoria Station was built in 1860-2 by the Victoria Station and Pimlico Railway Company and half the capital for this was subscribed by the London, Brighton and South Coast Railway, with the London, Chatham and Dover Railway subscribing 1/3rd and the Great Western Railway 1/6th. The stations were designed from the beginning as two separate stations used by different companies. The oldest part surviving is the eastern or Kent (ie the L, C & D R) side which opened on 25th August 1862, and it was this side that was used by the GWR in conjunction with the West London Extension Railway, which connected with their main line at Old Oak Common via Battersea railway bridge; and this was opened the following year (2nd March 1863). The L, C & D R station continued unchanged until after the company had amalgamated with the South Eastern Railway to form the South Eastern and Chatham Railway in 1899. The rebuilding of the L, B & S C R side of the station (see below) in 1906-8 inspired the S E & C R to respond with the highly decorated new frontage designed by Alfred W Blomfield which fills the gap between the L, B & S C R building and the original departure building of the L, C & D R in Hudson's Place. This was built in 1909-10.
The L, B & S C R's half of the station had first opened on 1st October 1860 and was designed by their engineer, R Jacob Hood. By the late C19 this station had become extremely overcrowded and it was decided to build a much larger and better planned one designed by their Chief Engineer, Sir Charles Morgan. The new section along the Buckingham Palace Road was brought into use first in 1906-7 and the old station was then demolished (the entranced canopy dated 1880 survives at Hove station). The completed new station was formally opened 1st July 1908.
The Victoria Station and Pimlico Railway Company remained nominally independent of its user companies until Grouping when both sides came within the Southern Railway. The Great Western Railway continued to have running powers into the eastern side of the station, although their last services seem to have run in 1915. The Southern Railway's first attempt at unification was to make the double arched opening through the wall between the two stations. This was done in 1924-5 and the platforms were then numbered right across the station as now. Electric traction had arrived at the L, B & S C R station in 1909 with the overhead system. This was changed to third rail in 1929 and under the S R rapidly expanded, with the Brighton service being electrified in 1933. Electrification on the Kent side also followed close on Grouping, with the local commuter services to Orpington being changed in 1925 and those to Gillingham and Maidstone in 1939; but the full length of the lines to Dover and Thanet were not completed until 1959; while Platforms 1-8 were lengthened the following year.
The Brighton side train shed and the screen wall along Buckingham Palace Road have now been rebuilt and replaced by office blocks over the tracks in the major rebuilding of 1980s and 1990s undertaken by British Rail. The Kent side of the station, however, still remains much as it was at Nationalisation in 1948, with the war damage to the original part of the L, C & D R station having never been properly reinstated, although it was given a new Booking Hall in 1951.