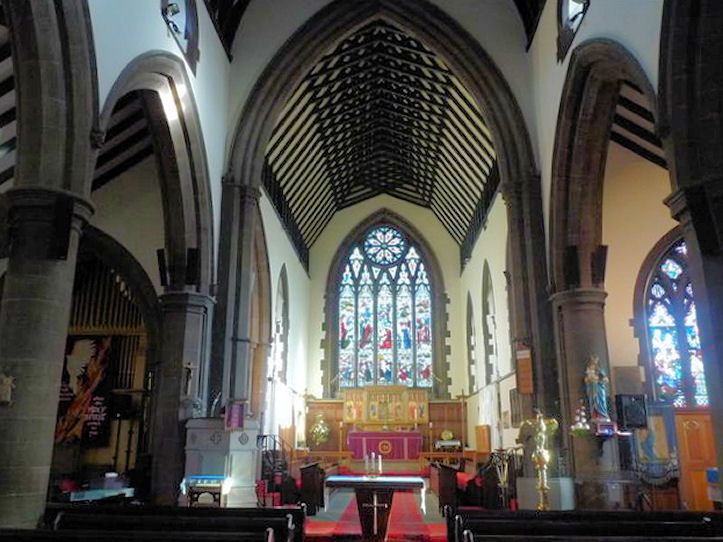 EXTERIOR: Sited in a large grassed churchyard St Matthew's Church acts as a focal point in this area of terraced housing from which it is separated by a wall in matching materials. The imposing four-stage west tower has angle buttresses and is surmounted by a broach spire. The spire has gabled, traceried lucarnes. The west doorway is decorated with trefoil cusping, nook shafts and bands of fleuron and nailhead ornament. Above is a 3-light geometric window, followed by quatrefoil windows to the bell-ringing chamber. The louvered windows to the fourth stage are 2-light with heavily crocketed hood moulds, splayed shafts and set between smaller copies in blind tracery. The nave is of four bays with lancet windows to the aisles and quatrefoils to the clerestory. The chancel is of three bays with double-light traceried windows and a door to the south wall. To the east end is a 5-light geometric window. To the north-east projects a vestry with an axially mounted chimney stack.

INTERIOR: The interior is largely contained between the full-height chancel and tower arches which define the sense of space. The walls are plastered but with window quoins left bare and support a scissor-braced roof. To the east end wall is linenfold panelling to dado height. Double-chamfered arches spring from alternate octagonal and circular columns with bell capitals to the nave arcade. To the north-east the organ chamber opens to the chancel. To the west end is an internal timber and glazed porch with a brattished cornice.

PRINCIPAL FIXTURES: The church has a good set of C19 and early C20 fittings. These include a gilded triptych reredos with painted figures in a quattrocento style. The choir stalls, matching the panelling to the east end wall, are in linenfold and were given as a First World War Memorial. Polygonal stone pulpit with nook shafts match the octagonal stone font. The very fine east window is believed to be the work of Heaton, Butler and Bayne, a window to the north aisle is by Hardman & Co.

HISTORY: The foundation stone was laid 1855 with the chancel and nave consecrated in 1858. Funding came partly from the Incorporated Church Building Society with the work being inspected on completion by Ewan Christian for the Commissioners. The tower and broach spire were added in 1866. Heywood Alderley was the builder, J. & J. Longton of Stockport did the timberwork and decoration. The later tower and spire were built by Mr. Forrester of Stockport.

The architect, Joseph Stretch Crowther (1832-1893) was a significant architect of the pioneer phase of the Gothic Revival. Articled to Richard Tattershall (ca. 1803-1844) from 1832 until 1842 he had the good fortune to become managing clerk, and subsequently partner, to Henry Bowman (1814-1881) in 1846. This partnership lead not only to a series of accomplished churches in the second half of the C19 in Middle Pointed style, and other buildings, but the publication of a two volume work `Churches of the Middle Ages' (1845 and 1853). This favoured the Decorated, or Middle Pointed, style of Gothic architecture, and particularly that found in Lincolnshire. The combination of scholarship and design quality to create a "correct" type of medieval church is a hallmark of both their work, and increasingly of Crowther's in his own right as here at St. Matthew's. The son of the Dean of Manchester Cathedral he developed perhaps the leading church practice of his day in Manchester with works including St. Phillip's, Alderley Edge (1853-57), St. Mary's, Hulme (1856), and St. Nicholas, Beverley (1877-80). In addition to these works he became responsible for the restoration and partial re-building of Manchester cathedral, and restorations and extensions of many other churches.

In 1991 the benches to the west end were removed and curtains used to screen off the rest of the church. The south porch was also blocked to form a toilet.

REASON FOR DESIGNATION:
St Matthew's Church, Grenville Road, Edgeley, is designated at Grade II for the following principal reasons:
* A well proportioned and accomplished Gothic Revival church of the mid-C19
* A good example of the influence of the Ecclesiological Movement.
* As a largely unaltered example of the work of the notable Manchester architect and restorer J.S. Crowther