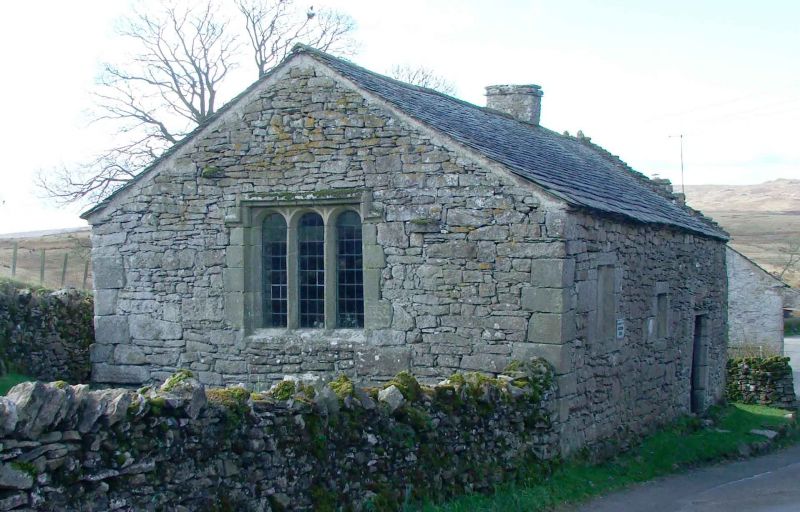 Chapel. Late C16, used as a dwelling between late C17 and C19, repaired and restored to use as a place of worship early C20. Coursed rubble limestone with limestone dressings , single ridge chimney and a Westmorland slate roof covering, laid to diminishing courses.
PLAN: Simple 2-cell plan, the result of domestic conversion, and aligned north-east / south-west .
EXTERIOR: North-east gable with 3 light window, the lights with elliptically-arched heads below a re-set label mould. North-west elevation with 2 flat-headed windows and a doorway, all within irregularly-quoined surrounds, the windows of one and 2 lights, the doorway with chamfered jambs and a later lintel. South-east elevation with 2 windows similar to those to the north-west wall, and a blocked c.1700 window.
INTERIOR: Simply-furnished interior subdivided by a cross wall with inserted domestic hearth with stepped jambs and irregular, narrow lintel. Inserted recess to left. Unplastered stonework and exposed rafters and purlins.
HISTORY: The first documentary reference to Keld Chapel is a christening in 1672. In the late C17, the building ceased to be used as a place of worship and was converted into a dwelling. The building was repaired in 1897 and became the property of the National Trust in the early C20. The building stands within a small churchyard bounded by an enclosure wall, which, together with the ground below the chapel is a Scheduled Ancient Monument ( No. 34988. )