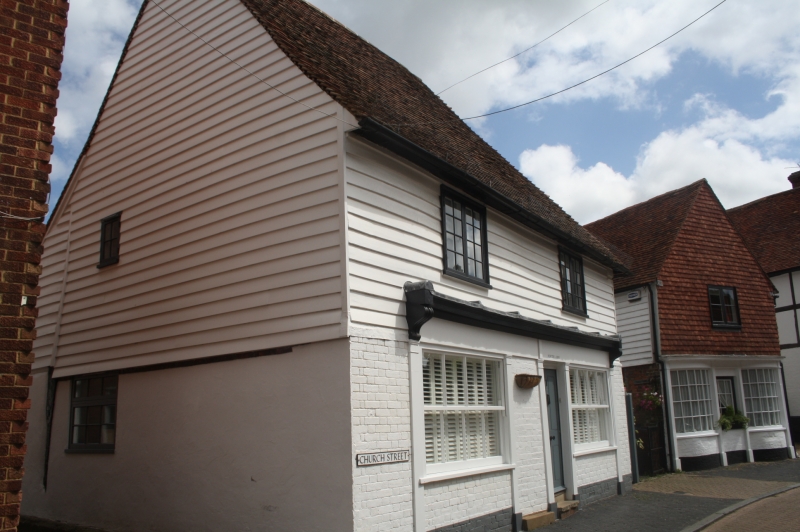 II
House, once including a bootmaker's shop. Probably late C15/early C16, some C19 and C20 modernisation. Timber-framed, most of the ground floor level is underbuilt with white-washed C19 brick, the first floor is clad with painted weatherboarding; brick stacks and chimney shafts; peg-tile roof.

Plan: two-room plan house built along the street and facing west. Both rooms have rear lateral stacks. The right (north) room is smaller. In the C20 it was divided by an axial partition and given a projecting end stack. Winder stair rises from rear outshot alongside the right room stack.

It seems likely that the late C15/early C16 house originally extended further left (to south). It was a continuous jetty house. The left room was the hall but was floored from the beginning. The stack here may be original. It is not clear whether the right room was an inner-room parlour or service end room. The stack here looks to be C19. Original site of front doorway and staircase are not known.

Two storeys with secondary lean-to outshots across the back.

Exterior: two-window front. First floor has C20 casements with glazing bars. Ground floor has a C19 shop front divided by timber pilasters with moulded capitals below a continuous fascia with fluted brackets each end supporting a moulded entablature. There were probably paired central doorways but the right one is blocked; the left one contains a C20 panelled door. Each side are shop windows with glazing bars. Tall and steeply pitched roof is hipped to right; gable-ended to left and to rear is carried down over the outshots. The front brick wall is built under the original jetty. This wall returns round the right end but does not extend right to the back. The rear section is still jettied and the curving ends of the joists are exposed.

Interior: well-preserved, particularly at first floor level where original framing is exposed on the outside walls and the crosswall. It is large-framed with large curving tension braces. The ceiling over the ground floor right room is carried on a plain axial beam with a dragon beam to the front. The crosswall is plastered over at this level. The left room/the hall has a chamfered and step-stopped axial beam. Both rooms have joists of-heavy scantling. Although the front wall has been moved outward a little the headbeam of the original framed front ground floor room remains. Its soffit is boarded over hiding the evidence of original windows, doorways and the like. Both fireplaces are blocked. Roof of two uneven bays with closed truss between. The roof structure is hidden but appears to be of crown post construction. The base of the crown post and down braces can be seen.

No 1 Church Street is a very interesting house, probably the oldest to survive intact in the centre of Hadlow. It is also very attractive and forms part of a group of varied listed buildings.