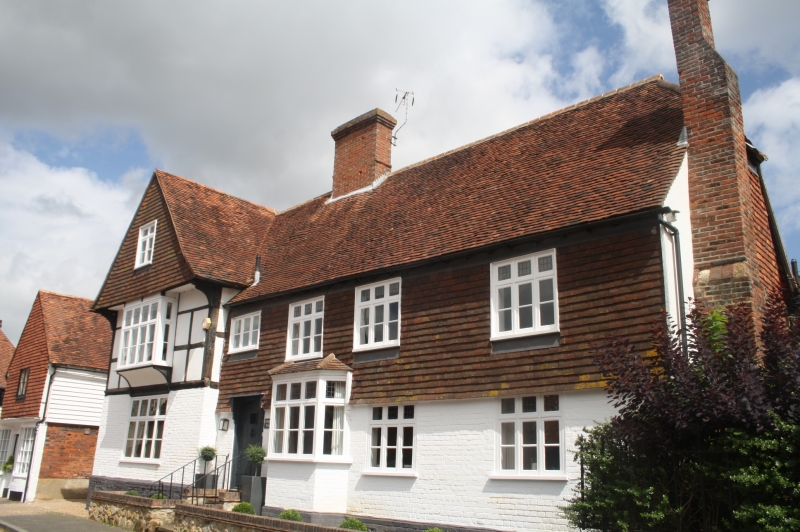 House, once used as a public house. C16, maybe late C15, origins, largely
rebuilt in the mid C17, some C19 modernisation and renovated circa 1970.
Essentially timber-framed but ground floor is underbuilt with white-washed
brick, the framing is exposed on the front of the parlour crosswing at first
floor level, and rest is clad with peg-tile; brick stacks and tall brick
chimneyshafts; peg-tile roof.

Plan and Development: L-plan house. The main block is set back a little from
the road and faces west. It contains 2 main rooms. At the right (south) end
a small room with a projecting end stack. The stack was added in the C18 or
C19; this was formerly an unheated service room. Next to it is the hall and,
at the left (north) end a parlour crosswing projecting forward a little. Hall
and parlour heated by a large axial stack between them and lobby entrance in
front of the stack at the left end of the main block. Main stair to rear of
hall is C20. Outshots to rear are of uncertain date and were converted to
domestic use in the C19.

Essentially this is a mid C17 house but the outer walls of the main block, and
the lower part of the hall/service room crosswall are earlier. The parlour
crosswing is entirely C17.

2 storeys with attics in the roofspace and a cellar under the parlour
crosswing. Single-storey rear outshots.

Exterior: Regular but not symmetrical 1:4-window front of late C19/early C20
windows. All are the same style and most are mullioned-and-transomed, and
some contain rectangular panes of leaded glass with margin panes. The canted
bay window to the hall is late C19/early C20 but there has always been a first
floor oriel to the parlour crosswing. It sits on curved brackets with
pendants under the corner posts on top of a moulded bressummer at first floor
level. Jettied gable above over moulded bressummer on curved brackets each
end. The front doorway, at the left end of the main block, contains a C20
door, Tudor style. Roof is half-hipped to right.

Interior: The early structural carpentry is well-preserved. In the back wall
of the main block it is clear that the wall was raised in the c17. ~here is
the old wallplate and cut-off wall posts raised approx .lm with C17 framing.
This C17 framing includes evidence of former windows which were blocked when
the outshots were added. Also it seems that the lower section of the
crosswall between hall and service end room is also earlier than the C17 since
the hall crossbeam rests on a wooden block on top of a rail. The joists of
the service end room however are set into the rail and are probably part of
the earlier house. All the other carpentry is C17. Hall has a chamfered and
step-stopped crossbeam and the oak lintel shows of the large fireplace, now
blocked. The parlour has a roughly chamfered crossbeam, and the fireplace has
an oak lintel with a low Tudor arch; brick jambs are rebuilt. Roof of both
wings on C17 tie-beam trusses with butt purlins.

Church Place is one of a good and varied group of listed buildings in the
vicinity of the Church of St Mary (q.v.). The owners have the deeds back to
1680.