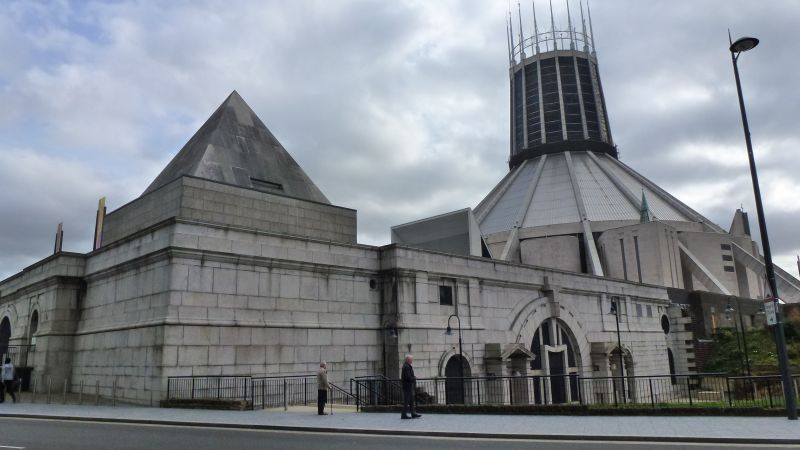 Crypt: 1933-40. Sir E Lutyens. Brick with granite facing. Facades to north and east and west. East facade is symmetrical, with 3 round headed windows, the central one mullioned and transomed and with large keystone. 2 entrances have Tuscan aedicules with open pediments. West facade similar. North facade has 5 lunettes, round-headed entrances to ends.Interior of blue brick with red brick vaults and granite dressings. 2 central circular spaces are flanked by the concert hall to west and Blessed Sacrament Chapel to east. Both have double aisles and end in 3 apses. To north is the Community Hall and to South is the
Pontifical Chapel. Chapel of Relics to south has 3 round headed recesses faced with marble containing Doric aedicules supporting chest tombs; pierced round stone serves as door (the "Rolling Gate") -The Crypt was the only completed part of Lutyen's design for the Cathedral, and would have lain across the main axis, at the north (ritual E) end. An impressive fragment of what Lutyens thought would have been his greatest achievement.

Cathedral (added to List Entry in 1994):- competition held for its design 1959-60. Constructed 1962-67. Architect Frederick Gibberd. Concrete frame with ceramic mosaic cladding; walls clad in Portland stone; aluminium sheet covering to roof. Circular plan with central altar and perimeter chapels. Conical form with sixteen raking concrete supports linked by ring beams at the eaves and at the base of the stained glass and concrete lantern which crowns the building. Within each bay of the frame, except at the front, is set a stone clad chapel; these are varied in form, some with squared corners and some with rounded corners. They are separated from the frame by strips of stained glass. The front bay is occupied by an entrance porch of triangular section which rises away from the body of the church to form a cliff-like facade which houses four bells and is adorned with a symbolic relief by William Mitchell. To each side of the entrance are doors incorporating fibreglass reliefs, also by Mitchell. The sixteen vertical concrete members of the central lantern are each topped by tall metal pinnacles, linked by a delicate web of metal struts. Internally the walls are plastered. The interior contains various fittings and fixtures of note, including the following:- The central lantern or'corona' is filled with stained glass by John Piper and Patrick Reyntiens, cemented together with epoxy resin and pre-cast within tracery of thin concrete ribs, a technique invented for the job. The Sanctuary:- canopy by Gibberd; Crucifix by Elizabeth Frink; Altar Cross and Candlesticks by P Y Goodden. The nave space:- Piper and Reyntiens stained glass framing the side chapels; curved benches by Frank Knight; geometrical floor pattern by David Atkins. The Chapel of the Blessed Sacrament:- stained glass, reredos and tabernacle by Ceri Richards. The Baptistry:-grey and black floor and bronze gates by David Atkins. The Lady Chapel:- Madonna statue by Bob Brumby; stained glass by Margaret Traherne. The Chapel of St Paul of the Cross:- stained glass by Margaret Traherne. The Archbishop's Throne was designed by R D Russell. Sources:- N Pevsner, South Lancashire; F Gibberd, Metropolitan Cathedral of Christ the King, Liverpool (1968); Architect and Building News 1960, 31 August, pp 265-70+ 228-9; Architectural Review, 1967 June pp 436-448.