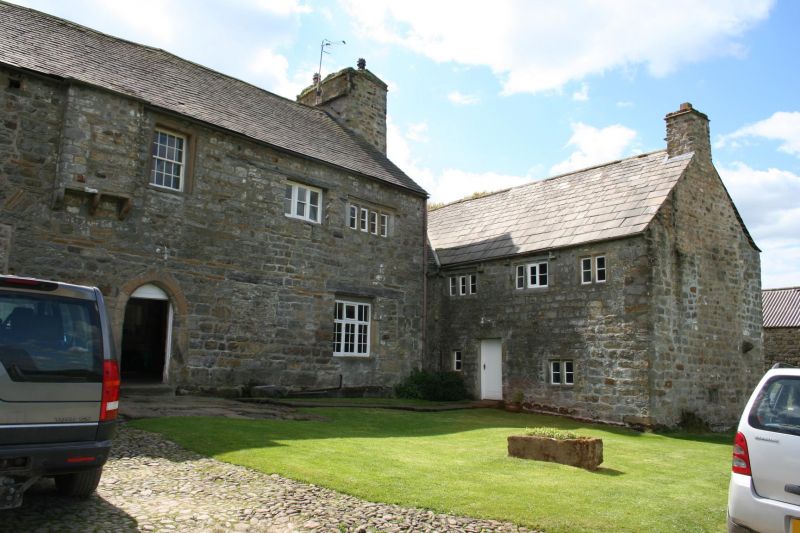 House and barn, late C16th with early C17th additions. Main, C16th, range
altered late C19th when the eastern part of the house was converted into a
barn. Sandstone rubble with steep slate roof. 2 storeys. Right-hand part
of north facade originally had wooden-mullioned windows. 2 external timber
lintels for these remain on the ground floor and one on the 1st floor. The
left-hand opening is now blocked and the right-hand one has a modern
window with plain reveals. The 1st floor window is partly blocked. To the
right on the 1st floor is a 4-light mullioned window with hood. To the
left, above the door, is a sashed window with glazing bars and plain stone
surround. The door, originally to a cross-passage, has a chamfered
surround with pointed arch. At the left the barn wall has been mainly
re-faced. The wide entrance has plain reveals and a timber lintel. Above
is re-set a cartouche with the Cansfield arms. To the left the wall is
covered by a modern lean-to. To the right a chimney breast projects at 1st
floor level on stone corbels. It is now truncated at eaves level. The
left-hand gable has had its chimney cap removed. The right-hand gable
chimney, which served the kitchen, has a massive external stack. The
present house is at the left of the rear wall. The left-hand bay has a
3-light chamfered mullioned window on the ground floor and a 1st floor
window with stone surround within an earlier opening. At the right on the
1st floor is a 3-light mullioned window with hood. Below is a window with
plain reveals. At the right is a blocked doorway, originally to a cross
passage, now containing a window. To the right the barn has several
blocked openings. A large chimney stack with offsets projects forwards. To
its right is a stair turret, probably an early Cl7th addition and now
under a lean-to roof. It has blocked mullioned and transomed windows. To
the right on each floor there is a blocked window, each with mullions of a
different type. Against the western gable there is a lower wing of early
c17th date adjoining at an acute angle. It has chamfered and
hollow-chamfered mullioned windows. On the ground floor its east wall has
one of one light to the left of the door and one of 2 lights to the right.
On the 1st floor there are windows of 3 lights with hood, a similar one
with one mullion removed, and a 2-light window without hood. The door has
plain reveals. Chimney on right-hand gable. The west wall of this wing has
3 2-light windows on the ground floor, 3 of 3 lights with hoods on the 1st
floor, and a window with plain reveals at the right on each floor. The
door has plain reveals. Inside, the barn has a blocked fireplace with
segmental arch in the south wall, a smaller blocked fireplace above, and a
blocked 1st floor fireplace in the north wall with moulded surround and a
lintel inscribed: '?CE 1627'. The roof has trusses with tie beams nd
collars. The western truss is wind braced. The house has timber-framed
internal partitions of late C16th type on the ground and 1st floors. A
ground-floor doorway has a depressed-ogee head. The wing at the west has
some timber-framed internal walls. On the 1st floor are 2 original plank
doors with timber surrounds. The northern 1st floor room of this wing has
square framed panelling of C17th type.