A Grade I Listed Building in Tunstall, Lancashire 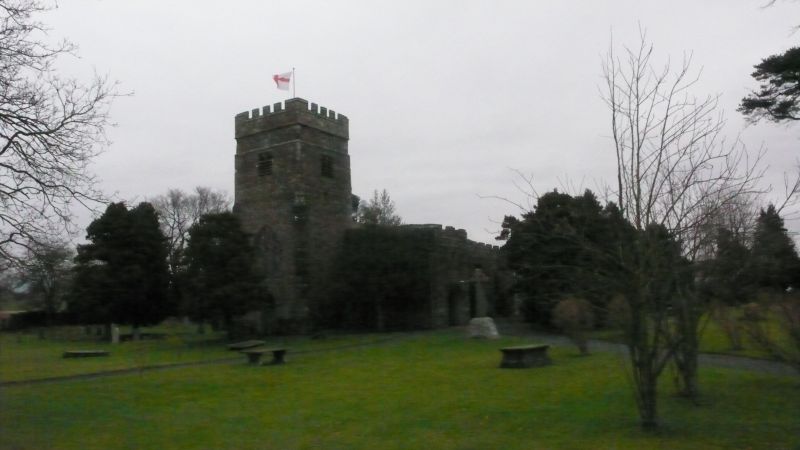 Church, c.1415 with some C13th remains and C16th alterations, restored
1907. Sandstone rubble with slate roof. Comprises a west tower, a nave and
chancel under a continuous roof, north and south aisles, and a 2-storey
south porch. The tower has diagonal buttresses and an embattled parapet.
The bell openings are of 2 trefoiled lights with flat heads and hoods.
Above each opening, above a weathered set-back, is a carved tablet of an
angel holding a shield. The west window is of 3 cusped lights under a
pointed head with Perpendicular tracery. The west door has a
hollow-chamfered surround with pointed head and hood. The north aisle has
an embattled parapet and 3 windows of 2 trefoiled lights under a pointed
head with quatrefoil. To the right is a blocked doorway with pointed head.
To the left is a C19th vestry. The south aisle has an embattled parapet
and is of 4 bays. The left-hand window is similar to those of the north
aisle. The 2nd bay has a window of 3 trefoiled lights under a pointed head
with Perpendicular tracery. The window to the 3rd bay appears to be later
and has 3 cusped lights under a segmental head. The 4th window is C16th
and has 3 round-headed lights under an elliptical head. To the left of the
4th bay is a chamfered priest's doorway with pointed head. The 2-storey
porch has an embattled parapet and a moulded pointed doorway. Above the
door is an empty niche, now with a sundial plate. Above is some blind
tracery, and above that a one-light window. The east window of the north
aisle is similar to those of its north wall. The south aisle east window
has 3 tall slightly pointed lights. The main east window is of 3 lights
with a flat head with hood cutting across earlier tracery. Interior has
4-bay nave arcade with pointed arches and octagonal piers with moulded
capitals. The west respond of the north aisle has some stiff-leaf foliage
in the capital; the east respond has carved spirals. The chancel has
arches to both north and south, both of which appear to be restorations.
The roof is of 1907 and has tie beams with curved queen struts. The
screens to the chancel and south chapel are of oak with tracery decoration
and appear to be by Austin and Paley. A Roman votive stone is re-used as
part of the inner jamb of a window in the north aisle. In the south wall
of the chapel is a recess with, segmental arch, containing the mutilated
effigy of Sir Thomas Tunstall. On each side of the east window are angel
brackets. The east window contains Flemish glass. The outer lights, of
the Madonna and child and of St. Anthony, are Cl5th. The central light is
C16th and shows the Lord giving the keys to St. Peter. Under the tower
arch is a C18th oval marble font on sandstone baluster base. The
numerous wall tablets include memorials to the Fenwick family. The church
was attended by the Bronte sisters while at the Clergy Daughters' School
at Cowan Bridge and appears as Brocklebridge Church in Jane Eyre.