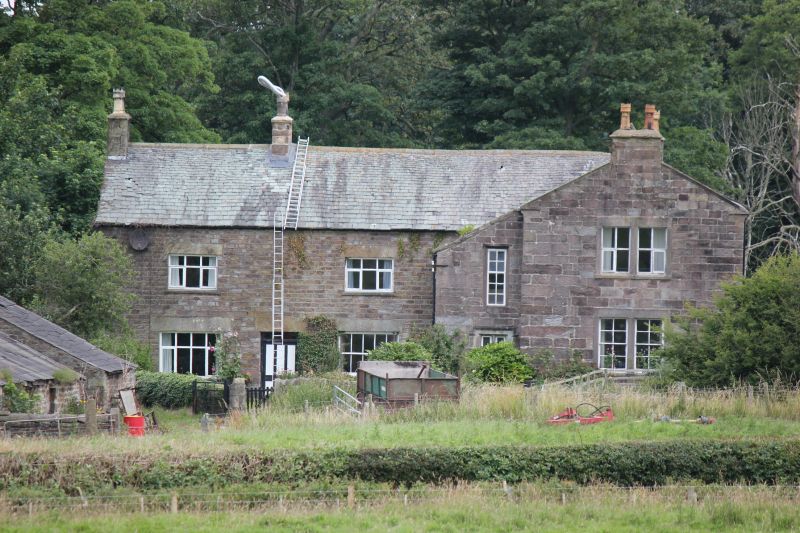 House, probably early C17th with remains of late medieval timber framing and
C19th alterations. Sandstone with slate roof. 2 storeys with attic. Main
range of squared rubble, of 2 bays having windows with plain reveals. The
door, between bays, has plain reveals. Chimney on left-hand gable and to left
of door. At the east side is a cross-wing of squared sandstone blocks. The
main part of its facade is of one bay, having paired windows within a plain
stone surround, separated by a square mullion. Against its left-hand (west)
return wall is a lean-to stair outshut having a 2-light mullioned window with
outer chamfer, inner hollow chamfer, and hood. Above is a stair window. The
left-hand return wall of the outshut has a 2-light mullioned window. Chimney
on front gable of cross-wing. Inside, the east room of the main range has
fragments of timber framing exposed in its rear wall. 2 studs have a later
timber doorway set between them. A corner post abutting the cross-wing is
cut to receive 2 doorheads at right angles to each other. A chamfered stone
doorway with Tudor-arched head leads into the cross-wing. A second similar
doorway has been uncovered within the stair outshut. Within the 1st floor
bedroom and attic above the room with exposed timber framing is a tie beam
above floor level and a king post of narrow section, possible once an open
truss of a timber-framed hall. The building will be described by
Watson, R.C. & McClintock, M.E., in Over Wyre Historical Journal, 1984-86
( forthcoming ).