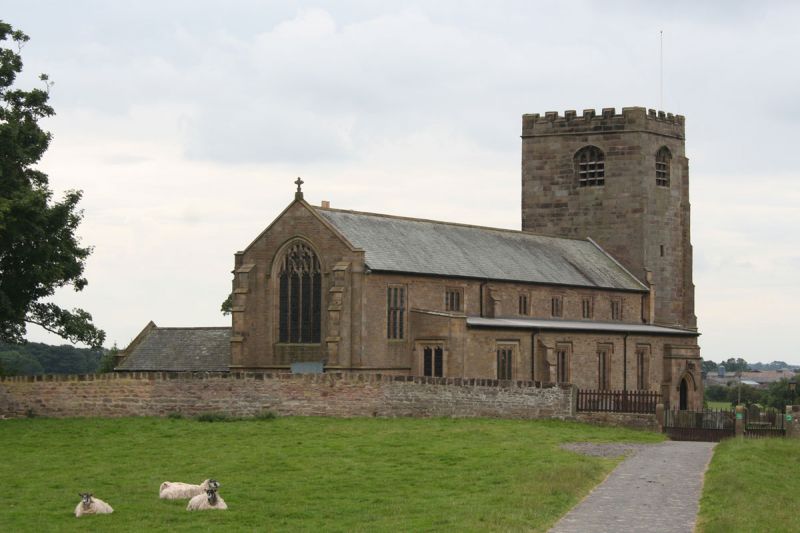 Church, 1910 by Austin & Paley, with C16th west tower ('1589' said to be
inscribed on beam from tower). Snecked sandstone rubble with ashlar tower and
slate roof. Comprises a west tower, a nave with clearstorey and a chancel
under a continuous roof, north and south aisles, and south transept with
vestry. The 3-stage tower has diagonal buttresses, a stair turret on the
south side, and an embattled parapet. The bell openings are each of 3 pointed
lights under a Tudor-arched head with hood. The west window is similar. The
west doorway has a round arch, hollow chamfered in 2 orders. The aisle and
clearestory windows have flat heads and cusped lights. On the south side the
aisle and clearstorey each have 4 2-light windows, the 2 western aisle windows
being paired. On the north side there are 4 nave bays with similar windows.
The western bay of the chancel is aisled and has a 3-light window. Its
eastern bay has a 6-light mullioned and transomed window. The doorway, in the
western nave bay, has a porch-like ashlar surround of shallow projection and
is moulded with pointed head and hood. The east window, flanked by buttresses
with offsets, has 4 cusped lights under a pointed head with Perpendicular
tracery and ogee quatrefoils. Interior has 5-bay nave arcades with pointed
arches hollow-chamfered in 2 orders and piers with 8 sides, 4 concave on plan,
and no capitals. The tower opening has plain reveals and a high pointed arch.
Between nave and chancel there is no arch, but the piers are round. Above
them attached shafts on corbels support the roof truss. The 2 bays of the
chancel arcades have a round pier with capital on the north and a pier with 4
of its 8 sides ovolo-moulded to the south. The piscina and twin sedilia have
depressed ogee heads. The roof trusses have braced tie beams, queen posts,
and raking queen struts. Intermediate trusses have arch-braced collars. Wall
tablets re-set from the previous church include one in the gothic style to
James Clarke (d.1845) by F. Webster of Kendal, and the Creed and Lord's
prayer in an elaborate gothic frame. The east window contains figures of the
4 evangelists dating from 1865.