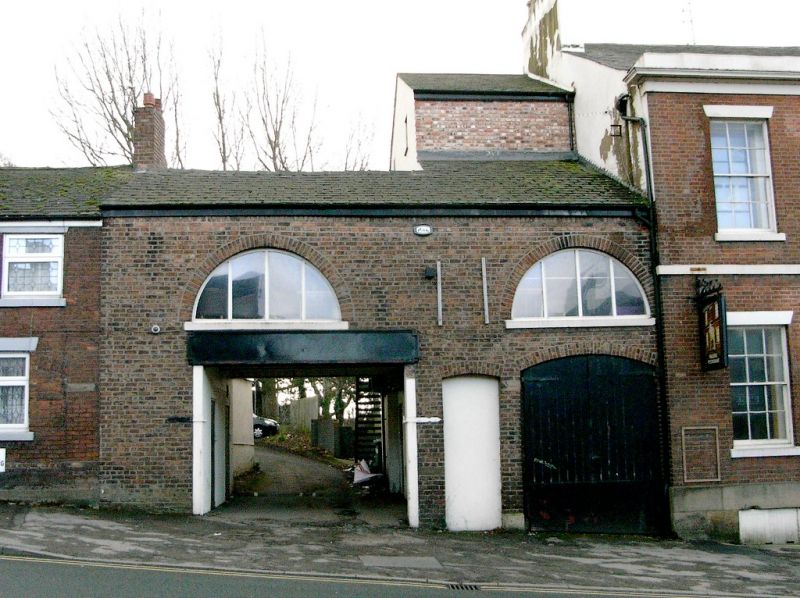 House with attached stable wings, now restaurant, early C19 with a few
later alterations. Brick (in Flemish bond) on sandstone plinth with stone
(or stucco) dressings, slate roof and gable stacks. 5 bays, 2 storeys with
cellar and attic. The doorway is set within a semi-elliptical arch and has
engaged Ionic columns carrying a simple cornice with a semi-elliptical
fanlight over. Probably original door with.6 raised and fielded panels.
All windows are sashed with 12 panes and have stone (or stucco) lintels and
sills. Doorway is approached up a double flight of stairs with cast iron
railings; these have stick balusters on the flights but a roundel in the
centre of the top balustrade which supports a late-c19th lantern (also
supported from the cornice of the doorway). To either side (but not
symmetrically) are lower two-storey wings with stable or coach house doors
below and a pair of lunette windows above. Interior: Most doorways have
reeded jambs, but the detail generally appears to be towards mid C19.
Staircase has open string (with brackets decorated with Vitruvian scrolls)
stick balusters and a mahogany handrail. Landing window has margin-pane
glazing, reeded jambs and a semi-circular head decorated with feathers set
radially. History: House built by John Birley for his son Edward, who died
in 1811 before it was completed. Edward Birley's tomb is in the churchyard
of the Church of St. Michael (q.v. under Church Street).