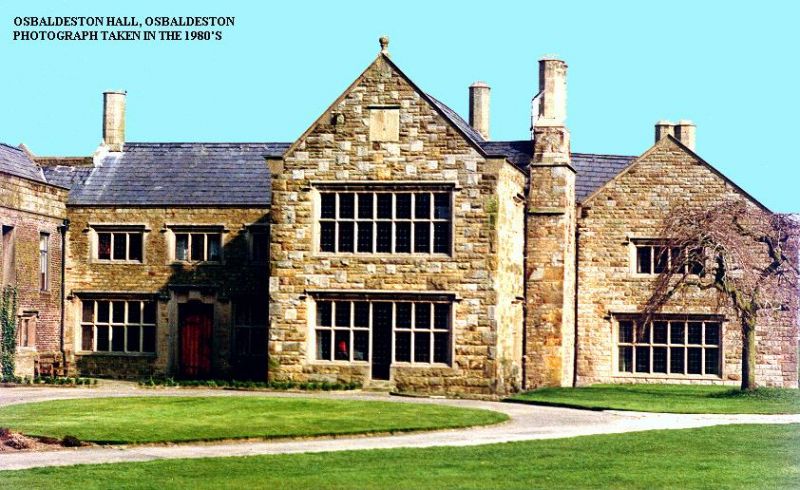 OSBALDESTON
SD 63 SW
4/31 Osbaldeston Hall
27-8-1952
- II*
House, probably c.1600 with remains of C16 and earlier, altered 1946.
Exact development of house complex. Most of house faced in snecked
sandstone rubble dating from 1946 restoration. East and south walls of
'banqueting hall' of brick. Remains of cruck frame and post-and-truss
frame inside. Slate roof. 2 storeys. South front has long range known as
'banqueting hall' projecting forwards at left. This has an east wall with
a plinth, quoins, and parapet of stone. On the ground floor are 4 2-light
double-chamfered mullioned windows with hoods. On the 1st floor are 5 tall
windows with plain reveals. The west wall of this range is of sandstone
rubble and has 2 projecting bays, now under catslide roofs, with blocked
mullioned windows. Between them is a chimney stack projecting on stone
corbels, now truncated at eaves level. On the 1st floor the north gable
wall has an ovolo-moulded and chamfered mullioned and transomed window now
partly blocked. On the south side the recessed central part of the facade
is of 3 bays, with mullioned and transomed windows on the ground floor and
mullioned ones above, all replaced in 1946. The central bay has a doorway
with lintel inscribed: '1946'. At the right is a one-bay cross-wing with
double-chamfered mullioned and transomed windows, again C20 replacements.
This wing has remains of timber framing visible inside. Its east wall has
a projecting chimney stack. Set back to the right is a gabled wing of 1
bay which has a mullioned and transomed ground-floor window on the ground
floor and a mullioned one above. This wing is partly cruck-framed inside.
Inside, the 'banqueting hall' now has no 1st floor and the tie-beam
trusses are visible. These are constructed from timber re-used from a
timber-framed building. On the 1st floor the right-hand cross-wing has an
elaborate plaster fireplace surround with overmantel, incorporating terms,
figures, and a shield with many quarterings. It also has the initials 'EO'
and 'MO', attributed to Edward and Maud Osbaldeston, who held the estates
1575-90 (VCH). The walls of this wing show some evidence of timber
framing. The trusses visible in the attic have king posts rising from
cambered tie beams to a yoke, braced downwards to the tie beam and with
queen struts. The purlins are wind-braced. The right-hand wing has 2 cruck
trusses visible on the 1st floor and in the attic, one against the
southern gable wall. The other truss is partly visible on the ground
floor. Both have outriders and a yoke below the apex. The northern truss
of the 2 has spurs to wall posts, confirming that the walls of this wing
were originally timber framed. The upper parts of both trusses, visible in
the attic, appear to have light smoke blackening.