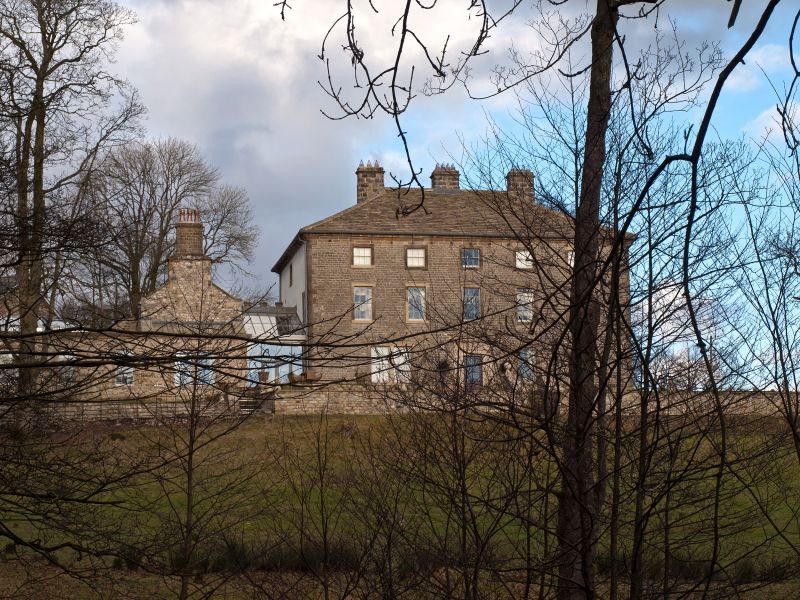 House, probably an early C18th mansion, reduced in size, and altered in the
C19th. Squared coursed limestone with sandstone dressings and hipped stone
slate roof. 3 storeys. The south facade is of 5 bays, with projecting quoins
and a ground-floor string course. The windows are sashed with glazing bars and
have architraves. The 2 windows to the left of the door have been moved so that
they are now adjacent. The large stone doorcase has Tuscan pilasters, a triglyph frieze
with guttae and with metopes decorated with flower designs, and a pediment. At
the eaves is a deeply-moulded stone cornice. The west wall is pebbledashed, the
stone soffit of the eaves being supported on shaped stone brackets. The east wall
has projecting quoins, a ground-floor string course and a moulded stone cornice.
It is of 5 bays, the ground-floor windows altered and now paired. The central
doorway has Tuscan pilasters and a semi-circular head with stepped projecting
keystone. The north wall is pebbledashed and has projecting quoins and a stone
eaves soffit carried on shaped stone brackets. It is of 6 bays, having sashed
windows with glazing bars in plain stone surrounds. Between bays 2 and 3,
and cutting across the window surrounds, is a porch of timber and rendered brick.
It has a timber shell hood, and clustered wooden columns at its outer corners.
Adjoining the west wall is an L-shaped 2-storey wing containing the kitchen and
other service rooms. Its north wall is of one bay and has a ground-floor doorway
whose plain stone surround rises to form a stair window with one transom and with
glazing bars. The east wall of the wing is of 2 bays and has windows with
plain stone surrounds and square mullions, of 2 lights except for the left-hand ground-
floor window which is of 3 lights. The interior appears to have been remodelled
in the mid-C19th and the front entrance moved from the south to the north facade.
The main rooms are panelled in a Georgian manner. In the centre of the south
side of the house is an open-well stair of 2 flights with landing, having an
open string and 3 turned balusters per tread. The upper part of the stair hall
rises through the 3rd storey and has a decorated cornice and blank niches with
architraves.
A drawing made c. 1720 and titled 'Slateburn Town Head The Seat of Mr Hen Wiglesworth
to the South' shows a larger house in similar style which does not correspond
in either the number of bays or the number of storeys to the present building.
Buck, Samuel, Yorkshire Sketchbook. Reproduced in Facsimile, Wakefield, 1979.