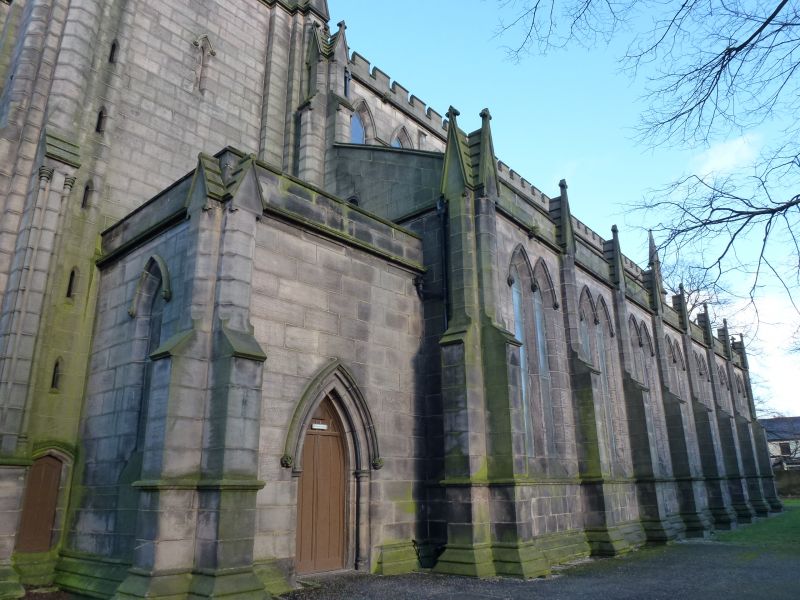 Church, 1822-25, by Thomas Rickman. Ashlar, with slate roof. West tower,
nave and chancel in one, north and south aisles; in Early English Style.
Four stage battlemented tower with small angle buttresses; like all the
buttresses on the building these are persistently chamfered, and end in
octagonal pinnacles. Arched west doorway under a crocketed gable; tall
lancet with hoodmould; clockfaces on 3 sides of short 3rd stage; belfry
with arcades of 3 tall lancets (the outer ones blind). Seven-bay nave and
aisles; aisles have vertically-emphasised bays of coupled lancets with
stopped hoodmoulds, separated by buttresses ending in pinnacles above a
plain coping; nave has horizontal emphasis with clerestorey of evenly-
spaced lancets (2 to each bay), the hoodmoulds linked by a band carried
across vestigial buttresses which terminate below the cornice of a
battlemented parapet. East window of 5 stepped lights. Interior:
moulded 2-centred arches on piers with attached shafts which have
moulded caps; deeply splayed tower arch with tracery and stained glass;
all ceilings are flat, but supported by flying ribs, simply in the aisles,
but of hammerbeam construction in the nave with sexfoil spandrels, every
other frame standing on wall shafts; gallery of arcaded panels at west
end and inside each aisle, supported by very slim iron shafts and cusped
multifoil segmental arches. Baptistery at west end of north aisle has
white marble angel carrying a scalloped bowl (said to be copied from
Thorwaldsen); elaborately sculpted octagonal pulpit by Thomas Rawcliffe
of Chorley; parts of original box pews now form wainscot to aisle walls. A
Commissioners' church which cost £12,387(Pevsner). An impressive and
characteristic Rickman design.