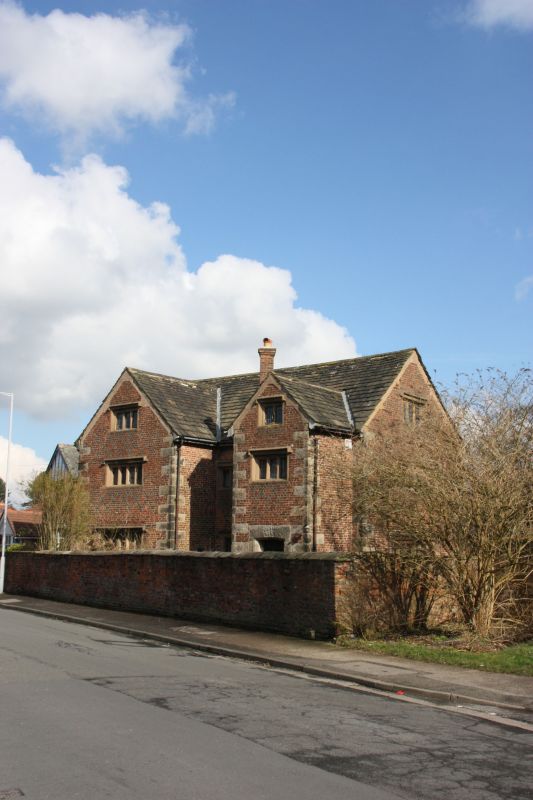 House, dated 1630; restored in 1938 by A.C.M. Lillie after 10 years
dereliction. Brick on stone plinth, with stone quoins and dressings,
rendered mullion windows, stone slate roof; 3 chimneys, one forward of the
ridge and 2 at the rear, none -corresponding to the position of the original
main fireplace. Three bays with projecting wings (of unequal width) to the
1st and 3rd bays, and a short rear extension to 2nd bay. Two and a half
storeys; gabled wings stepped in slightly from outer corners; the first,
which is wider, houses the staircase and has a window with a hoodmould on
each floor (5, 4 and 3 lights), and the second, which contains the porch,
has upper windows of 3 and 2 lights and a moulded stone doorcase with
Tudor-arched lintel lettered in relief:

Between the wings are 2 windows, that at ground floor altered, the other
of 5 lights. Left return wall has two 5-light windows under one hoodmould,
and a window on each floor above, of 6 and 3 lights; right return wall has
windows on each floor, of 6, 6 and 3 lights; and rear wall has some small
modern wooden mullion windows. Interior: inglenook with stone heck post
and moulded bressummer in 3rd bay; ¼-round moulded beams; spiral newel
staircase to full height. Cavity to rear of fireplace in inglenook, said
to be priesthole but probably smoke hood; "decoy hole" reported in 1938,
location not given. First floor has primitive ornamental painting of
crucifixion, in C17 style. (Lancashire Daily Post, 20 May 1938)