A Grade I Listed Building in Peckleton, Leicestershire 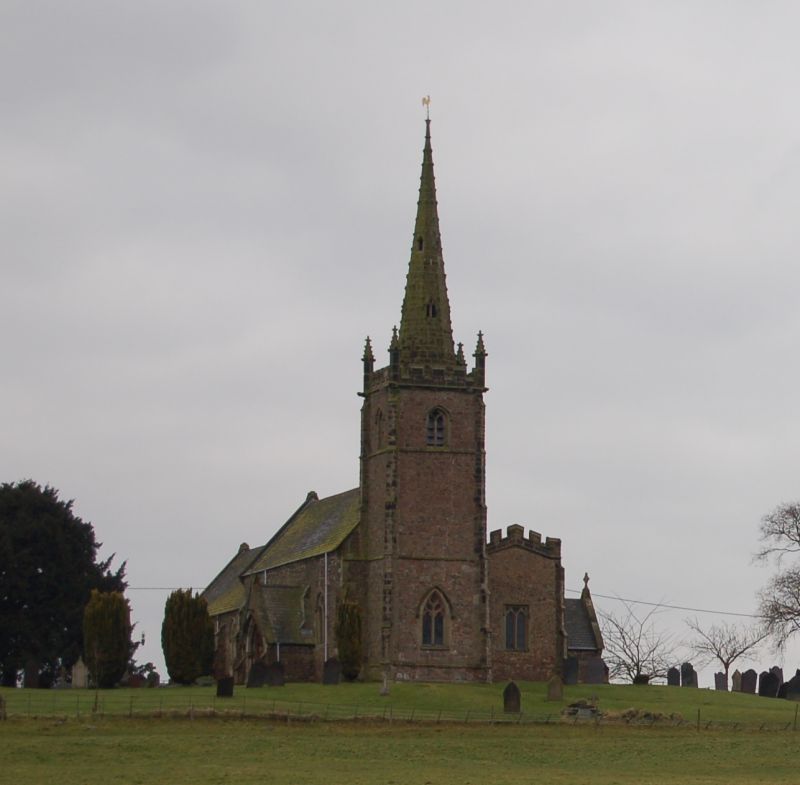 GV
I
Parish church. Early to mid-C14 with C16 alterations; restored 1869 by F.B. Osborn of Birmingham. Random rubble with freestone dressings, and Swithland slate roofs with stone coped verges. West tower, 4-bay nave with south aisle and north and south porches, 3-bay chancel. West tower: 3 stages with offsets, diagonal buttresses to the western corners and square set buttresses at the eastern corners, all surmounted by panelled and crocketed pinnacles, set diagonally to their respective buttresses; crenellated parapet with continuous moulded coping and recessed octagonal tower with crocketed angles and 2 tiers of lucarnes. Pointed west window with concave quarter-round-moulded surround and ogee-moulded hood ending in carved heads: 2 lights with flowing tracery incorporating an ogival heart shaped motif. The belfry lights have cusped Y-tracery beneath 4-centred arches; these are probably late C14. Nave and south aisle: The south front has a square-headed window at the west end; 2 lights with truncated reticulations over; the other two windows on this side also have 2 lights with reticulated tracery beneath 2-centred arches; all have hood moulds with head-stops. 4 C16 clerestory windows of 2 trefoil-headed lights beneath 4-centred arches, and concave half-round-moulded surrounds.

C19 south porch with pointed opening on one order of shafts with stiff leaf capitals and roll and fillet moulded arch. Diagonal corner buttresses and crenellated parapet with continuous coping and hollow chamfered string. In the east wall of the aisle is a C16 window of 3 trefoil-headed lights beneath a 3-centred arch; above is another clerestory window. Similar C16 windows on the north side of the nave but transomed. North porch matching that on the south side. Chancel: One C15 south window of 3 trefoil-headed lights and perpendicular tracery beneath a square head; C14 east window with 4 trefoil-headed lights and flowing tracery containing an ogival heart-shaped motif, and a hood mould with head-stops. The north windows are C19 restorations. Interior: C14 four-bay south arcade of double chamfered pointed arches on octagonal columns with moulded capitals and bases. The tower arch has an outer chamfered surround and an inner chamfered arch springing from corbels with carved heads. Chancel arch on engaged semi-octagonal columns with moulded capitals. C19 king-post roof over nave. C19 braced collar roof over chancel. Fixtures and fittings: C12 font with cylindrical pedestal and basin, the latter decorated with a pattern of concentric lozenges. Above the tower arch is a hatchment depicting the arms of Queen Victoria, presented to the church in 1863. Incorporated into the west wall of the south aisle is the side of a C16 alabaster chest tomb with an arcade containing figures. Below it is the medieval parish chest, the lid being made of a single piece of wood. At the east end of the aisle is a piscina with ogee head, indicating that this part of the aisle was once a chapel. C19 hexagonal stone pulpit with traceried sides. Piscina in the chancel with dog-tooth surround, apparently C13. Monuments: in the south wall of the chancel is an early C14 tomb recess with ogee arch surmounted by a cross, and 2 orders of convex quarter-round mouldings. On each side the mouldings are terminated at floor level by a trefoil-headed panel containing a carved figure; within the recess is the effigy of a civilian with hands raised in prayer. On the north side of the chancel is a near identical recess containing the effigy of a knight wearing chain armour including a coif de mailles, and a belted surcoat reaching to the knees; his legs are crossed. Next to him but outside the recess is the effigy of a lady with wimple headress. On the north wall of the chancel is the incised top from an early C16 chest tomb showing a knight in full plate armour flanked by 2 ladies. Tablets to the Reverend William Wood, died 1814, and Robert Chesser, died 1831, the latter having the carved picture of a graveyard with portrait medallion above. Stained glass: 2 small panels of C14 fragments in the chancel south east, including a nun and a St. Michael. The east window of 1894 is by Kempe.
B.O.E. p.347