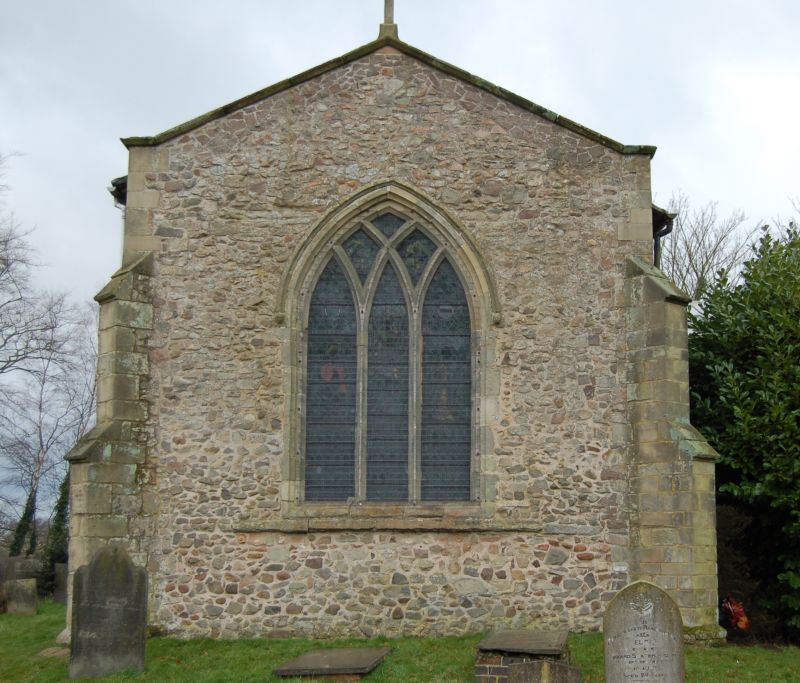 Parish church. Early C14 with C15 west tower and early C18
alterations; restored 1888 by Osborn and Reading of Birmingham. Random
rubble with freestone dressings; slate roof over nave and lead covered
roof over chancel. West tower, 3-bay nave (a north aisle was removed
in the early C18) with north porch, 3-bay chancel with south vestry.
West tower: 3 stages marked by strings, with moulded plinth, diagonal
buttresses to the western corners and a crenellated parapet with
continuous moulded coping. 2-centred west window of 3
cinquefoil-headed lights and Parpendicular tracery, with moulded
surround and hood mould returned to the sides as a string. The second
stage has a west window comprising a pair of lancets recessed within a
rectangular frame with chamfered edges. Segmental pointed belfry
openings of 2 lights with returned hood moulds. On the south side of
the nave there is a buttress at each extremity, the western one having
a C17/C18 bronze sundial fixed to it; this has a centrepiece of a coat
of arms with a pair of lions rampant as supporters; above and to the
sides are figures within semi-circular arches. The blocked south door
has either a 4-centred arch or a 2-centred drop arch. To the left hand
end of this front is a C18 window with semi-circular head and brick
surround; to the right are 2 C19 windows with segmental-pointed heads
and Y-tracery. On the north side the blocked arcade is still visible
with inserted C18 windows like the one at the west end of the south
front. The westernmost of these northern windows has a brick apron and
stone imposts. C18 gabled porch of brick with semi-circular arch on
stone imposts. Chancel: 3-light pointed east window with intersecting
tracery, concave quarter-round-moulded surround and hollow chamfered
hood terminating in heads. On the north side to the left of centre is
a 2-centred window with Y-tracery and concave quarter-round-moulded
surround; to the right is a blocked window and to the left, a tall
blocked window or doorway, the sill being approximately 2 feet off the
ground. Buttresses at the bay divisions and diagonally placed
buttresses at the eastern corners. Interior: 2-centred tower arch
with double ogee-moulded surround; an inner arch with wave surround
springs from moulded corbels. 2-centred chancel arch with continuous
outer chamfer, and inner chamfered arch springing from moulded corbels.
C18 king-post roof of relatively low pitch over the nave; it is
strengthened by posts standing on corbels from which carved braces
extend to the tie beams. On the north side of the chancel is an arcade
of 1½ bays, the double chamfered arches springing from octagonal
columns with moulded capitals. C19 king-post roof over chancel with
panel tracery between the tie beams and the roof. Fixtures and
fittings: Font of 1906 in the form of an angel holding a shell shaped
basin; the marble base is inscribed "SUFFER THE LITTLE CHILDREN TO COME
UNTO ME". C18 pews with matching dado along the side walls; these were
originally box pews but the doors have been removed. C18 hexagonal
pulpit with raised and fielded panels.

Simple rood screen forming a 3-bay arcade on cylindrical columns with
moulded caps, and simple tracery in the spandrels. The priests bench
is dated 1615 and is attached to choir stalls with carved panels of
stylized foliage and bench ends surmounted by poppy heads. An C18 dado
extends around the walls of the sanctuary; in the south wall is a
piscina with moulded surround and trefoiled head springing from moulded
corbels. Early C17 Gothic oak reredos comprising 4 panels each framed
by a semi-circular arch on cylindrical shafts and containing 4 lancets
and debased Perpendicular tracery beneath a rose of swirling
mouchettes. Early C18 wrought iron altar rail with grapes and vine
leaves. Monuments: 2 incised slabs, one of 1404 or earlier. Martha
Lambe, died 1758: Tablet with eared surround and swan neck pediment.
Judith Lambe, died 1750: Tablet with raised and eared surround
surmounted by an urn spouting flame. Sir Clobery and Elizabeth Noel,
died 1733 and 1743: Tablet with open pediment, side scrolls and 2
portrait medallions facing each other. Thomas Noell, died 1756,
Commander of the Princess Louisa, and mortally wounded in a sea battle
with the French near Minorca; a large projecting base is surmounted by
an obelisk which acts as the background to an achievement of arms
within which are superimposed an anchor, a cannon, and other
instruments of war. Sir William Noel, died 1697; large wall monument
with gadrooned base, broken semi-circular pediment containing a coat of
arms flanked by festoons and surmounted by an urn spouting flame. Sir
William Noell, died 1675; square pilasters with egg and dart friezes
and an open segmental pediment containing a coat of arms. On a chest
in front is the half reclining effigy of Sir William. Sir Edward Noel,
died 1774: 2 large fluted urns flanking a tree and an open segmental
pediment surmounted by a lamp spouting flame. Stained glass: the east
and south windows of the chancel are by Kempe, both 1894. B.O.E. pp.
134-5.