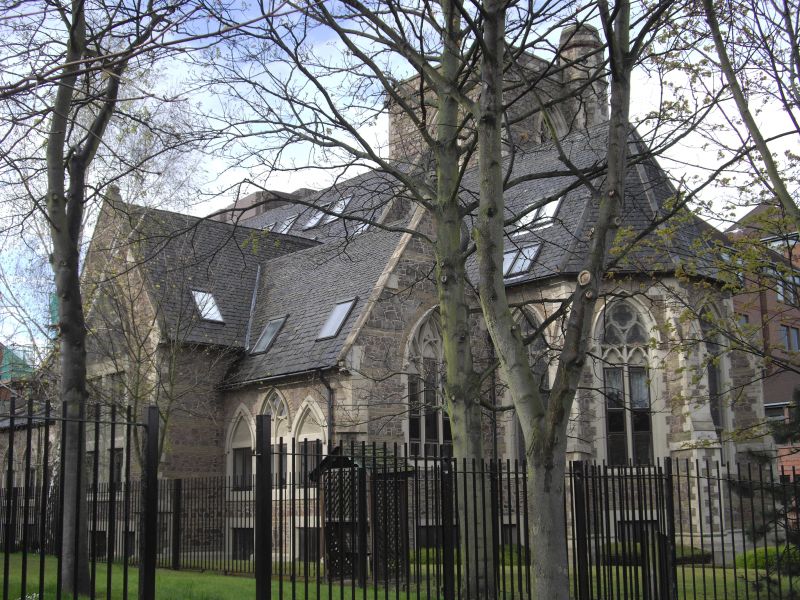 EXTERIOR: Mainly in the style of c1300 favoured by Scott, although the character is now compromised by modern window frames and skylights in the steep roof. The west front, facing Ashwell Street, has an elaborate doorway with nook shafts, below a band of 5 cusped lancets, and rose window in the gable. Aisles have pointed windows with modern domestic window frames. The 3-stage tower has angle buttresses, north-east polygonal turret, and plain parapet added in the 1950s when the spire was removed. In the lower stage are 2 lancets below a round window with quatrefoil tracery lights. The second stage has narrow cusped windows, and the upper stage has 2-light bell openings. The south transept has a 4-light south window. The former chapels in the chancel aisles have 3-light east windows, and the south has 3 south windows, of which the central retains window tracery. The chancel east end is a polygonal apse with 2-light windows.

INTERIOR: Not inspected; thought to be comprehensively altered.

HISTORY: Parish church of 1854-55 by G.G. Scott, built at a cost of about £7,000, originally with a spire that was taken down in the 1950s. Sir George Gilbert Scott (1811-78) began practice in the mid 1830s and became the most successful church architect of his day. His churches generally have a harmonious quality which derived their character from the architecture of the late C13 or early C14. The church of St John the Divine is a good example of his style and was one of the first Leicester churches to be built following ecclesiological principles. The interior was built with arcades of round piers and foliage capitals, and included glass by William Wailes and a wrought-iron screen of 1903 by C.H. Lohr. The church was redundant by the 1980s and was converted to apartments in the late 1980s.

REASONS FOR DESIGNATION: St John Chambers (former church of St John the Divine), Leicester, is designated at Grade II for the following principal reasons:
* It was one of the earliest churches in Leicester to be built under ecclesiological principles, by one of the foremost church architects of the C19.
* The church retains external character and detail, and possesses special interest notwithstanding its internal alterations and loss of fixtures.