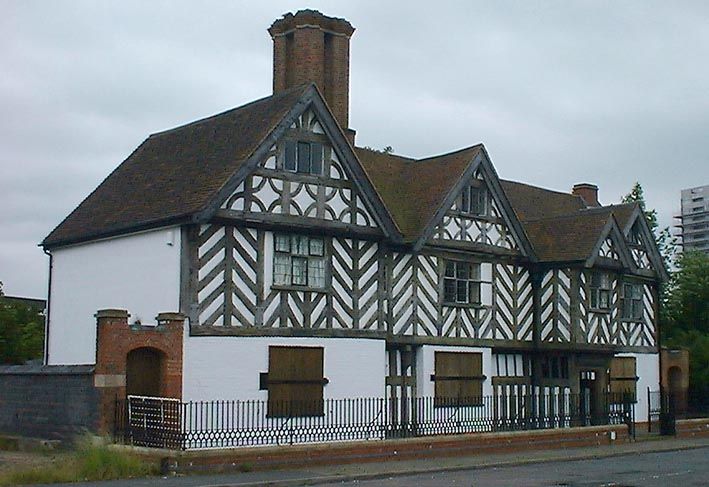 STRATFORD PLACE
1.
5104
Highgate B11
Stratford House
(formerly listed under
Camp Hill, Bordesley)
SP 0885 NW 53/12 25.4.52
II*
2.
Dated 1601 and built for Ambrose Rotton and his wife Bridget. Remarkable
survival of a 2 storey and attic timber framed and plastered manor house,
the ground floor partly refaced and underpinned in painted brick to support
jetty. Gabled cross wing to left and off centre gable and slightly smaller
gable to right, all slightly jettied on moulded brackets. Central 2 storey
gabled porch with first floor projecting on long angle brackets. Between
the cross wing and the porch either side of the modern brick window bay
the studding is exposed with a row of blocked wood mullion lights high
set on same level as the open one to sides of porch. The first floor
studding is braced in herring bone pattern and the gables have short curved
braces forming diamond patterns. Square headed moulded jamb opening to
porch with date on and initials on moulded cornice. The original battened
and studded door remains in situ with similar case to that of porch. Renewed
old tile roof with rebuilt clustered brick chimney stack, diamond shafted,
set on ridge by cross wing. Three light transomed metal casements with
leaded lights replacing C18 iron casements at time of restoration in the
195Os. Stratford House underwent considerable internal alteration in the
1820-30s when a rear brick built staircase wing and corridor were added.
Most of the door furniture is of this period but the 2 front rooms, flanking
the studded passage from the front door, retain chamfered ceiling beams
dividing the plastered ceiling, with deep cornice mouldings, into 2 compartments.
The left hand room retains 4 centred arch stone chimney piece and there is a
similar chimney piece, cased in a reeded early C19 surround, to the first
floor room of the cross wing. The back landing has exposed portion of the
original outside wall framing with a hammer-head wall post by the attic
stairs. The attics are plastered but the functions of some of the rafters
(partly renewed) and the framing of the gables are partially exposed.