The Ikon Gallery and Ikon Cafe 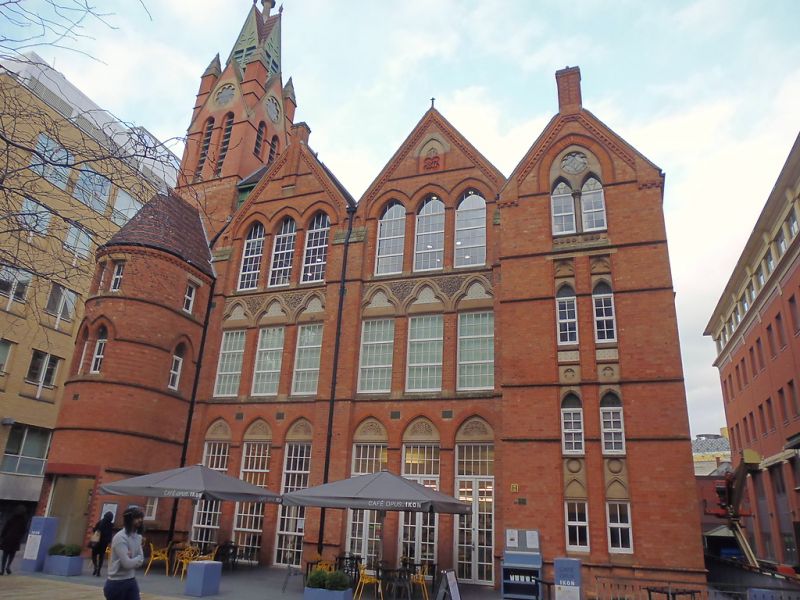 II
An art gallery which was formerly a school and then a furniture store. It was built for the Birmingham School Board in 1878 by Chamberlain and Martin and altered by the same practice in 1898. The building was converted to its present use by Paul Clarke of Levitt Bernstein c.1997. It has three storeys and is of red brick with tiled panels and ashlar decoration with a tiled roof.

EXTERIOR: The south-western front to Oozells Square has two prominent gables with three bays to each. The heads of the ground-floor windows have carving to their arched tympana and the first floor windows have cusped heads with tiled panels to the tympana and carved stone to the spandrels. To the left of this is a projecting bay with apsidal end and conical roof. This has arched lights to the first floor and flat stone lintels to the mezzanine floor above. At ground floor level a large, rectangular door surround was opened as an entrance to the galleries c.1997. Rising above this bay and recessed is the tower which was intended to provide air circulation throughout the building. This has plain brick to its lower, tapered body, above which are two louvered openings with a cusped circle to the gable above. Square brick posts to the corners have pyramidal caps, behind which is a further gabled and louvered vent with a central metal vane to the ridge. At right of the front is a projecting gabled staircase wing of four stories with central, paired lights and arched stone heads and a relieving arch with cusped rose to the apex. The south-east front has a bay with three joined lights beneath a relieving arch at left and a staircase tower with traceried head rising into a gablet at right. Recessed is a three-light gabled wing and to right again is the extension of c.1997, which has metal cladding and stainless steel ducts. To right of this and recessed are two bays with flat-headed windows and glazed tiles to the upper walling which appear to date from 1898. The north-west flank has the 1898 wing of two bays to the left, with the gabled, earlier building to the right and the glass-walled extension of c.1997 by Paul Clarke of Levitt Bernstein in between.

INTERIOR: The ground floor contains a lobby, leading to the restaurant and book shop, which both have glass internal walling. To the rear of the building is the staircase which rises behind glass walls and has wooden treads and glass flooring to the landings. This rises to connect with the gallery floors which have been formed from the classroom areas. To the second floor these have cusped wooden trusses in the portion of 1878 and arched metal beam trusses dating from 1898.

HISTORY: The Birmingham School Board was brought into being by the Elementary Education Act of 1870; the Act, which empowered school boards to create new schools and pay the fees of the poorest children, was largely the result of campaigning by the Birmingham-centred National Education League. By 1902, when the Education Act abolished school boards and passed the responsibility for education to local authorities, the Birmingham School Board had built fifty-two new schools, as well as the Board's offices. All but four of these schools were designed by the architectural practice Martin and Chamberlain - from 1900 Martin and Martin - appointed Architect to the Board in 1870.

John Henry Chamberlain (1831-83) and William Martin (1828-1900) formed the practice Martin and Chamberlain in 1864. Following Chamberlain's death, Martin was joined by his son, Frederick William Martin (1859-1917), and the practice continued under the same name until the death of William Martin when it was renamed Martin and Martin. The board schools operated as focal points within each district, serving as symbols of municipal pride and civic achievement; Martin and Chamberlain created a house style for their schools, which were characterised by their red-brick construction, tall ventilation towers, proliferation of gables, and decorative use of tiles and terracotta, sometimes displaying naturalistic forms. Chamberlain believed that beautiful and well-planned school architecture might offer children some compensation for drab, cramped homes, and in 1894 the Pall Mall Gazette commented that, `In Birmingham you may generally recognise a Board School by its being the best building in the neighbourhood... with lofty towers which serve the utilitarian purpose of giving excellent ventilation, gabled windows, warm red bricks and stained glass, the best of the Birmingham Board Schools have quite an artistic finish'.

Oozells Street School was designed by Martin and Chamberlain in 1878 for the Birmingham School Board and was intended to accommodate 807 children. In 1898 its status was changed to a Seventh Grade School - providing a higher level of education, and the north-east wing dates from this period. The building stopped functioning as a school in the mid-C20 and subsequently served as a college and as the Furniture Stores for the City of Birmingham Education Department in the later C20, at which time the ventilation tower was demolished. It was converted to the Ikon Gallery in 1997 by Levitt Bernstein as a part of the redevelopment of the canal area and Brindley Place, and the tower was rebuilt to the original design.

REASONS FOR DESIGNATION
The Ikon Gallery, Oozells Street, Birmingham is designated at Grade II for the following principal reasons:
* Architectural: An impressive school by Martin and Chamberlain, one of the leading architectural practices in late-Victorian Birmingham. The Victorian building is largely intact and its massing and detailing are well handled and designed to exploit the dramatic possibilities of a cramped site surrounded by narrow streets. Recent work to convert the building is imaginative and does not impact adversely on the older fabric and in some instances (most notably the rebuilt tower) it enhances the interest.
* Historical: One of twenty-seven surviving schools built by the Birmingham School Board, which together form one of the most important groups of board schools in the country.