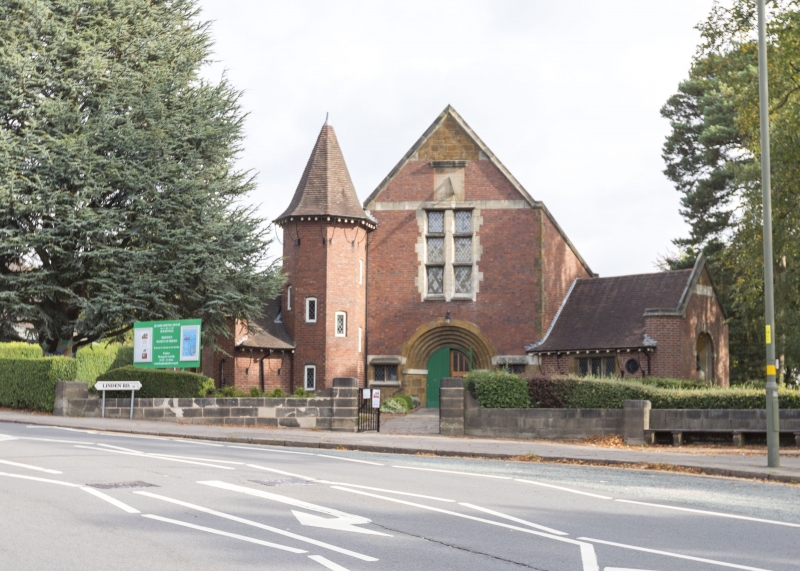 Location: Bournville and Cotteridge, Birmingham, B30

Quaker Meeting House, 1905, by W A Harvey, with subsequent phases of extension.

PLAN: the building stands at the junction of Linden Road, Woodbrooke Road and the Green. The original building had a rectangular plan orientated roughly north-south, with short angled wings and a stair tower framing the main entrance on the southern gable end. The building has since been extended to the north and west.

EXTERIOR: the main range of the building is a double-height structure with a pitched roof. The south gable end has a central doorway with a splayed opening with a Romanesque arch of five plain orders, containing timber doors. To either side there is a pair of mullioned casement windows with diamond leaded glazing. Above is a large six-light window with a wide mullion and transoms. In the gable a sundial is mounted on an incised stone panel. The elevation is articulated with stone bands, quoins and moulded copings on the gable. An octagonal stair tower rises at the left junction the gable; it has small leaded casements and a pyramidal roof with projecting rafter feet and iron brackets. Short single-storey wings with pitched roofs project diagonally at the angles, framing the gable end. That to the right (east) has a three-light mullioned window on the southern side, and within its gable is a stone-lined arched alcove with a bust of George Cadbury on a square pedestal. The left-hand (west) wing has a four-light mullioned and transomed window in its gable end.

The side elevations, facing roughly east and west, are fours bays in length. Each bay has a wide moulded segmental-arched recess within the brickwork containing a timber mullion and transom window. Rafter feet line the eaves, and the roof has a two- or three-light hipped dormer to each bay.

Extensions, of lesser interest, begin at the north gable, recessed from the building line and with lower, shallower pitched roofs. The 1960s extension is a rectangular pitched range set perpendicular to the main range, linked by a narrow flat-roofed section. A later, flat-roofed extension wraps around the north-west corner.

INTERIOR: the original entrance into the meeting house is via a tiled lobby, which also provides entrance to the stair tower and service rooms within the southern wings. The east wing contains the Cadbury’s columbarium. The meeting hall is lined with matchboarding to the dado with plain plaster above. There is a blind arch on the north gable end, and a gallery with a timber balustrade across the southern end. The meeting hall is a double-height space, well lit by large windows in the elevations and dormers in the roof. The four bays of the roof structure have collar trusses supported on arched braces rising from the floor. There are two tiers of purlins, with closely spaced rafters and beams at collar level, above which the roof is ceiled.

Fox asserted that no one place was holier than another, and in their early days, the new congregations often met for silent worship at outdoor locations; the use of member’s houses, barns, and other secular premises followed. Persecution of Nonconformists proliferated in the period, with Quakers suffering disproportionately. The Quaker Act of 1662, and the Conventicle Act of 1664, forbade their meetings, though they continued in defiance, and a number of meeting houses date from this early period. Broad Campden, Gloucestershire, came into Quaker use in 1663 and is the earliest meeting house in Britain, although it was out of use from 1871 to 1961. The meeting house at Hertford, 1670, is the oldest to be purpose built. The Act of Toleration, passed in 1689, was one of several steps towards freedom of worship outside the established church, and thereafter meeting houses began to make their mark on the landscape.

Quaker meeting houses are generally characterised by simplicity of design, reflecting the form of worship they were designed to accommodate. From the first, most meeting houses shared certain characteristics, containing a well-lit meeting hall with a simple arrangement of seating. Where possible, a meeting house would provide separate accommodation for the women’s business meetings, and early meeting houses may retain a timber screen, allowing the separation (and combination) of spaces for business and worship.

Throughout the C18 and early C19 many new meeting houses were built, or earlier buildings remodelled, with ‘polite’, Classically-informed designs appearing, reflecting architectural trends more widely. However, the buildings were generally of modest size and with minimal ornament, although examples in urban settings tended to be more architecturally ambitious. After 1800, it became more common for meeting houses to be designed by an architect or surveyor. The Victorian and Edwardian periods saw greater stylistic eclecticism, though the Gothic Revival associated with the Established Church was not embraced; on the other hand, Arts and Crafts principles had much in common with those of the Quakers, and a number of meeting houses, including that at Bournville, show the influence of that movement.

The C20 saw changes in the way meeting houses were used which influenced their design and layout. In 1896 it was decided to unite men’s and women’s business, so separate rooms were no longer needed, whilst from the mid-1920s ministers were not recorded, and consequently stands were rarely provided in new buildings. By the interwar years, there was a shift towards more flexible internal planning, together with the provision of additional rooms for purposes other than worship, reflecting the meeting house’s community role – the need for greater contact with other Christians and a more active contribution within the wider world had been an increasing concern since the 1890s.

The Bournville Meeting was established in 1882 with the relocation of Cadbury’s cocoa and chocolate works from central Birmingham to their new site to the south of the city, re-named Bournville in 1879. Following the opening of the new factory in 1879, George Cadbury, a Quaker, built a small number of dwellings for key workers close to the factory. In 1893, Cadbury purchased a further 120 acres to create a large garden suburb and provide his workers with quality homes. By 1900, 313 houses had been built and Cadbury founded the Bournville Village Trust. The Trust provided buildings for the community in Bournville Village including shops, Ruskin Hall, an Anglican Parish Church and the Quaker Meeting House, purpose-built in 1905.

The meeting house was built to the designs of William Alexander Harvey of Birmingham, the consulting architect for the Trust. The completed building was larger than the original designs, with a fourth bay during the early construction phase. Butler (1999) describes that the community use of the meeting house led to features that would not normally be seen in Quaker meeting houses, such as the organ, given in 1915 by George and Elizabeth Cadbury; following this the meeting house was referred to as a ‘Quaker Cathedral’.

The meeting house was extended and altered during the C20. An extension was made in 1923 to provide a small hall with adjoining kitchen and store room, and buttresses were built on the east elevation. Following Cadbury’s death in 1922 a niche was made for a bust, and a columbarium for his ashes. Internal changes to the meeting room in 1935 included the removal of the rostrum; the replacement of a platform; and the removal of the panelling within the arch to the south wall. In 1960 an extension was made for a children’s room with smaller library and cloakrooms by Selby Clewer, the chief architect at the Bournville Village Trust. Finally in 1988, the library was opened to make a lobby area, the main hall was re-roofed, internal front doors were added, and ancillary facilities were reconfigured.

* a well-composed and carefully-executed meeting house, built using good-quality materials with restrained detailing, following the Arts and Crafts principles that characterise the Bournville model village;
* a striking interior achieved through its lofty hall with exposed roof structure;
* retaining a good collection of fittings and fixtures, including an organ, installed by Cadbury in order to appeal to other Christian denominations.

* built at the expense of George Cadbury, himself a Quaker, as part of the development of the Bournville model village, and designed by locally-significant architect W A Harvey;
* including a columbarium and commemorative bust to George Cadbury – unusual features in a Quaker context.

* part of a group of social, educational, and spiritual buildings around the village green, many of which are listed, and with the adjacent listed walls and seats at the entrance to the meeting house and the Green.