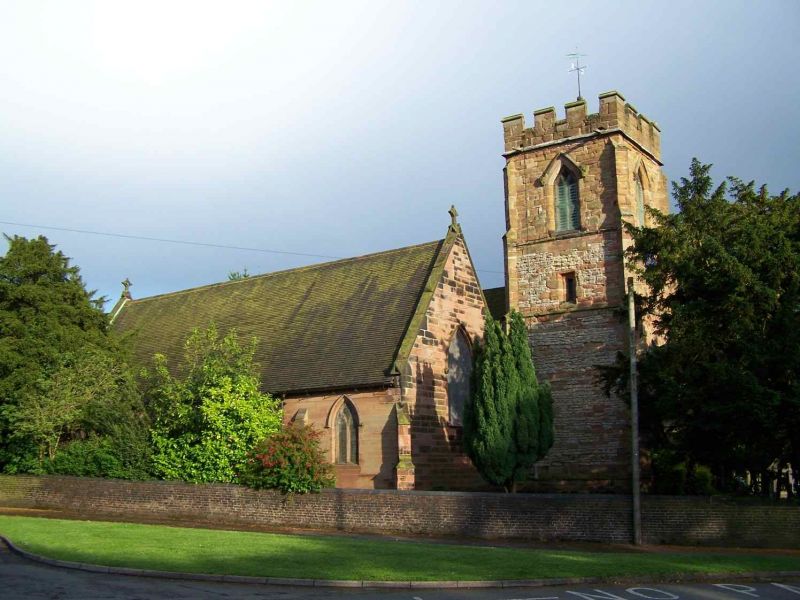 Church. C14, with south aisle of 1841. Extensively restored 1852-3 by
Salvin, when the north aisle and chancel were rebuilt. South vestry
added 1975. Red sandstone, with some limestone rubble exposed in tower.
Tile roof. Comprises a west tower, nave, north aisle under pitched roof,
south aisle, and lower chancel. The tower has diagonal buttresses, three
string courses, and an embattled parapet. The openings have straight-sided
pointed arches. The bell openings each have a mullion and transom. The
west window is of two lights with flowing tracery. The west doorway is
moulded with crocketed hood and head stops. The south aisle is of five
bays, the windows pointed and having flowing tracery of various descriptions.
The gabled porch, at the left, has a pointed outer arch with attached columns
as responds. The north aisle is of five bays separated by buttresses and has
2-light windows. The east window is of three-lights with flowing tracery.

INTERIOR: four-bay nave arcades, with further bay on north side opening into
chancel. Northern arches of sandstone, 4-centred, and chamfered in two
orders. Piers octagonal with capitals. South arcade similar, but plastered
except for the west bay. The pointed tower arch is chamfered in two orders.
Nave roof has queen-post trusses with a central strut and with V-struts above
the collar. The east bay of the nave has a collar-rafter roof and the chancel
has bolted softwood trusses with arch-braced collars. Chancel has piscina,
and an early C14 effigy in an arched recess. A second defaced effigy of
similar date stands on a later stone base in the south aisle. Re-set on the
north wall of the north aisle are several C18 wall tablets. The timber pulpit
has carving in a Jacobean style, and at the west end of the south aisle is a
bread cupboard dated: "TP 1694". Windows contain late C19 glass. One window
in the south aisle dated 1865, by Powell.