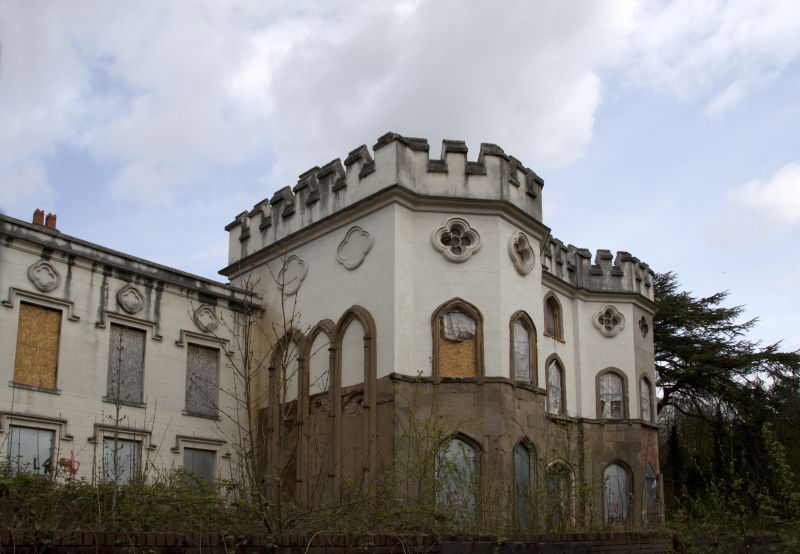 House. Probably late C18, re-faced in Gothick style early C19. Stuccoed
brick and sandstone with tile roofs. Main part of facade of three storeys,
with full-height canted bay windows on each side of central bay, and with
an embattled parapet. The lower storey is of sandstone ashlar, the upper
of stucco. The windows are sashed with Gothick glazing and moulded surrounds
with hoods, except for the second floor windows of the canted bays. These are
quatrefoils with raised moulded surround. First floor sill band, and moulded
string below parapet. In the central bay is a moulded doorway with Tudor-
arched head. The left hand return wall has a two-storey three-bay blind
arcade in an Early English style, with two blind quatrefoils above. At
right-angles to this wall, set back from the main facade, is a two-storey
four-bay range which has sashed windows with glazing bars and stucco hoods.
At the rear are further ranges of irregular plan. Interior: main block has
open-well stair with closed string, ramped handrail and turned balusters,
probably mid- or late C18. A brick spiral stair leads to vaulted cellars.
History: said to have been built about 1780 by James Attwood, a local iron-
master of considerable repute. Part of the main block is roofless and in a
derelict condition. A programme of major repairs had begun at time of survey
(December 1985).