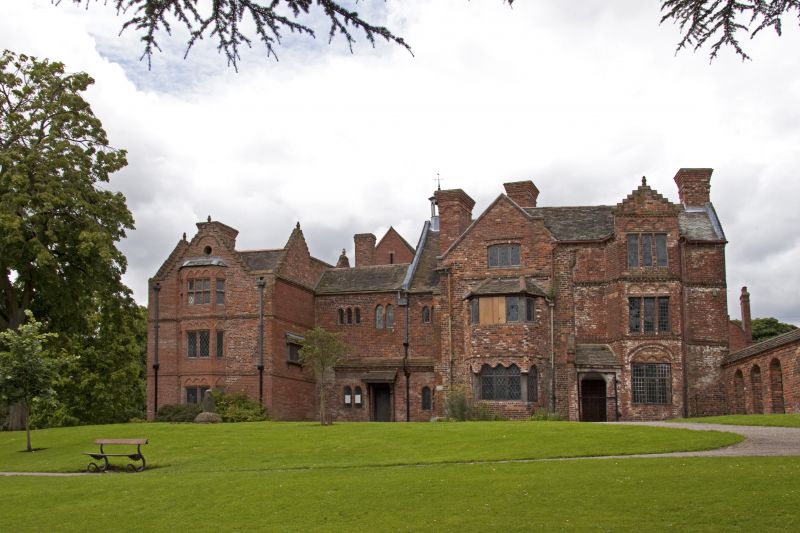 House. Circa 1700 and 1878. Brick with tile roof and with stone dressings
to the C19 wing. Earlier part, facing east, of more than one build, but
precise development unclear. The right hand part of the facade is of three
storeys, with a gable at the left, and a three-storey bay window with crow-
stepped gable to the right of a doorway. The windows are mullioned, with a
blank pointed arch over each light. On the ground floor at the left is a
canted bay window; on the second floor is one with segmental head. To the
left is the recessed three-bay two-storey section of the facade. Between
the second and third bays is a straight joint and a break in the roof line.
To each side of a central doorway are windows of two lights. On the first
floor they are of three, two and three lights. Above the ground floor is a
tile-covered string course. At the left is a projecting wing with a three-
storey canted bay window rebuilt in C20 brick and a crow-stepped gable.
Chimneys at left and to each side of right hand part of facade. The C19
wing faces south. The main part of the facade has a cross-wing at the left
with a shaped gable and a two-storey bay window. To the right are two bays,
with a doorway in the right hand bay. The earlier part of the building was
a roofless shell at time of survey (December 1985) and undergoing extensive
repairs following a fire.