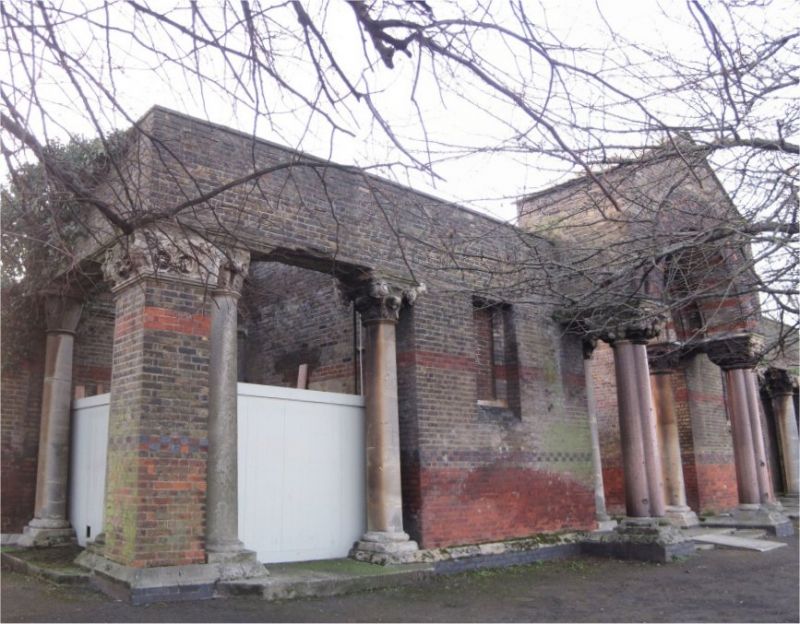 EXTERIOR: After destruction by a flying bomb in 1944 the chapel remains a roofless shell with just the lower parts of the walling remaining, except at the W end where the entrance porch is largely intact. Built in the style of a large Early Christian/Italian Romanesque basilica. It is still an impressive monument. Much use is made of brick polychromy with blue engineering bricks being used for the base course, and a red brick for the next stage. Above this comes buff stock brick for the main walling. The E end is a forceful composition with the semi-circular apse rising dramatically from the falling ground and flanked by two half-apse. At the W end the main porch stands under a gabled head and has monolithic pink Aberdeen granite piers of quatrefoil section. These carry ornately carved capitals with angel busts and, on the right-hand capital a gryphon. The arch above has red and blue brick polychromy. Square porticoes flank the main entrance each with detached columns framing the openings and capitals similar to those of the main porch. These porticoes have subsidiary entrances to the body of the church, no doubt to speed the entrance and exit of the large numbers of men being expected to use the chapel. The ruin was consolidated after the war.

INTERIOR: Something of the rich decoration of the E parts survives. The apse has a mosaic representation of St George and the Dragon as a reredos and a tiled inscription above. Some of the marble or alabaster wall covering survives to the right of the reredos. The lower parts of large columns framing the sanctuary entrance survive and behind these are more mosaics, of a peacock (left) and a phoenix (right). Over the side arches are grape and vine leaf trails, also in mosaic.

PRINCIPAL FIXTURES: An altar with stone trefoiled arches to its front stands in the apse.

HISTORY: The barracks at Woolwich for the Royal Artillery were built between 1776 and 1802. St George's was built as the garrison church in 1863 but was bombed in July 1944, leaving the ruin that survives today. It appears to have been planned when Sidney Herbert, 1st Baron Herbert (1810-61) was Secretary of War, 1859-61, and his influence no doubt lies behind the choice of style and the architect. The Early Christian/Lombardic Romanesque style had been used by T H Wyatt (1807-80) for the large and important church of St Mary and St Nicholas adjacent to Wilton House, the Herbert family seat. That church had cost £20,000. Wyatt was a prolific London-based architect who was honorary architect to the Salisbury Diocesan Church Building Society.

REASONS FOR DESIGNATION:
The chapel of St George, Woolwich, is designated at Grade II for the following principal reasons:
* Although now ruinous, it is a rare and important example of Early Christian/Lombardic Romanesque architecture in the mid-Victorian period.
* A good example of Victorian polychromy applied to a church building.
* It has group value with the highly significant military site of Woolwich
* Its ruinous state reflects the impact of aerial assault.