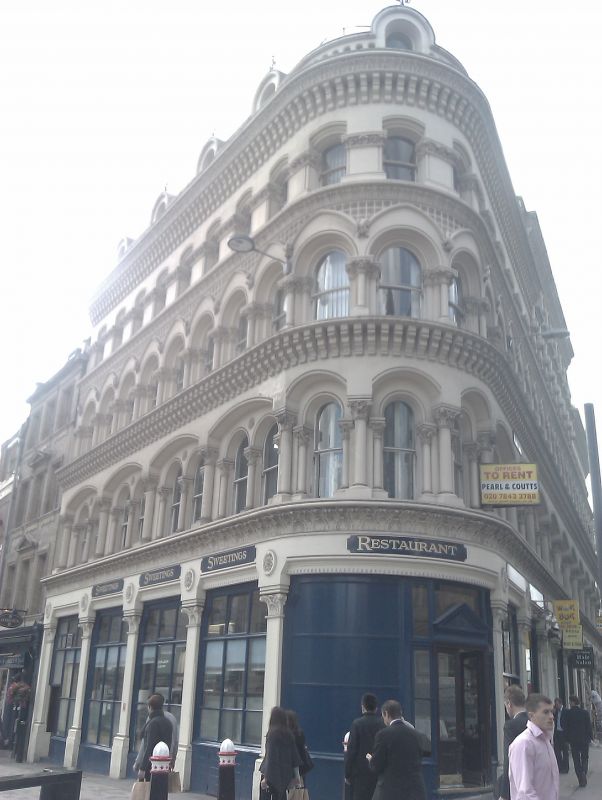 2.
1871 by F J Ward; occupying one side of a triangular island site, the main and
return elevations being continuous around the rounded corners; 4 storeys, painted
stone Italian gothic facade consisting of superimposed arcades in an uninterrupted
series of identical bays at each storey, the repetitive pattern varied only by
a 5 storey centre section on the main Queen Victoria Street front. 20 bays on
this frontage; ground floor shops each of 2 bays width between piers with foliated
caps; moulded lintols; enriched 1st floor cill band above which the 1st floor arcade
has attached columns with acanthus caps carrying stilted segmental arches, each
arched opening of 2 bays width over recessed pairs of round headed windows with
attached colonettes; narrower (single bay) arcade to rounded corners at this level.
At 2nd floor an arcade of round headed windows with colonettes, pointed arched
drip moulds, carved labels and enriched spandrels. At 3rd floor, squat piers with
carved caps and windows with moulded segmental stilted arched heads. Bold corbel
table at 2nd floor and enriched band at 3rd floor cill level, the entire elevation
crowned by a cornice composed of these 2 elements combined, surmounted by a pierced
parapet with widely spaced round headed lucarnes. The cornice is interrupted by
the 8 bay quasi-attic centre, its place being taken by corbelled balconettes to
the round headed windows which are deeply recessed in an arcade of pointed arches.
The raised centre is crowned by a cornice nearly identical to that over the main
facade.