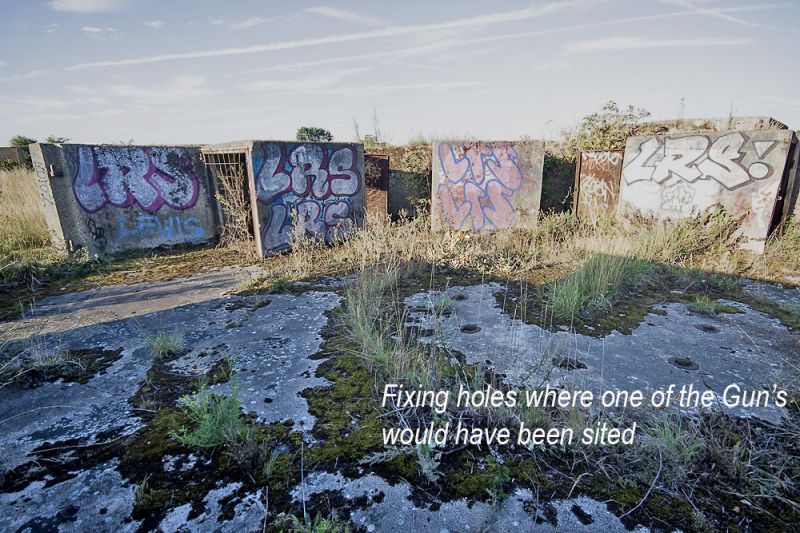 WHALEBONE LANE
TQ 48 NE
North (east side, off)
8/10
Anti-aircraft site at
TQ48738975
II
Anti-aircraft gun site. 1935-9. Brick with concrete render, and reinforced
concrete; felting to roofs and some walls of accommodation blocks. All buildings
single storey. Two command posts each with 4 gun emplacements set in a
semi-circle on eastward side and linked by concrete roads; between each pair of
emplacements, on outer side, is an ammunition store with blast walls; to
south-west of northern command post are 3 detached blocks (probably 2 ammunition
stores and a vehicle store), and another one to south-east of southern grouping
(near to 2nd emplacement in anti-clockwise direction and probably for vehicle
store). The command posts are comprised of clustered semi-subterranean
accommodation blocks and walling; the southern one having a circular brick gun
base. The gun emplacements are octagonal, each having 2 opposed entrances, that
at inner side formerly gated and having, outside the emplacement, 1 or 2
ammunition stores; the outer entrances have screening walls and next to each was
a subterranean corrugated iron shelter of which only fragments now remain; within
each emplacement are 6 small ammunition stores having opposed metal doors and,
inside, crude poles forming racks (the doors and poles now removed from a number
of stores); in the centre of each emplacement is former gun position marked by
holdfast bolts sunk in the concrete base. The larger ammunition stores (each
serving 2 emplacements) are of 5 bays, defined by pilaster butresses, with
windows and metal doors alternating (a number of windows now blocked and doors
removed); inside are 5 cells, some with shelves, connected by front corridor;
around each store are blast walls; the store at south-east corner of northern
grouping has a watch tower. Two of the detached blocks to south-west of northern
grouping have reinforced metal doors and ventilation holes at eaves; the larger
one has 3 larger metal-louvred openings on west side.
This anti-aircraft gun site formed part of the Inner Artillery Zone which
surrounded London. It survives particularly well and is significant, also, in
being a purpose-built 8-gun site (most sites had only 4 guns). The site saw a
considerable amount of action 1940-41. Information from report by M Gilman. See
also History of Anti-Aircraft Command Defence of Great Britain.