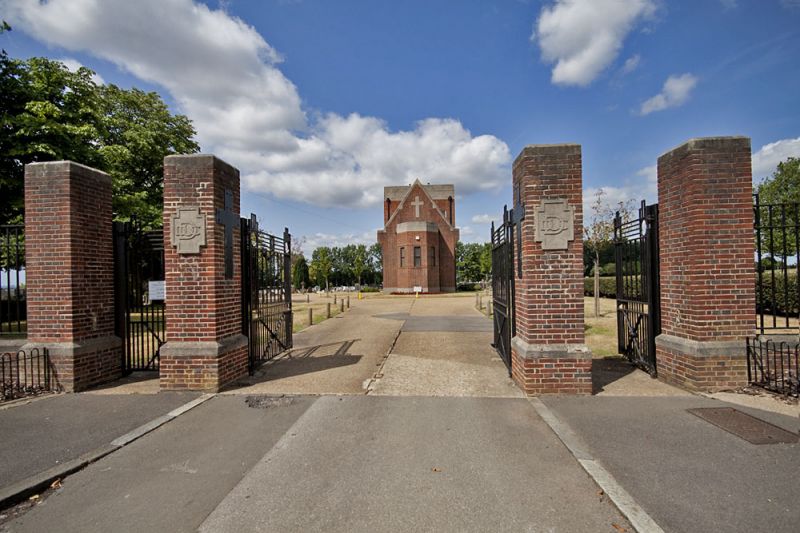 EXTERIOR: Broad tower or westwork with flush stone facing to lower storey and parapet stage. Two semicircular steps lead up to the western entrance, which has double timber doors with raised cross motifs, set beneath an inscribed entablature (the text now illegible) with a semicircular niche above containing a small stone casket in front of a stained-glass sunburst fanlight, the whole enclosed within a curved hood-mould. The stone facing above is carried through the full height of the tower as a stylised obelisk or cenotaph, bearing a raised Celtic cross and with its triangular cap breaking through the parapet line. Simplified version of this design on flanks of tower, with tall rectangular windows. The nave has a steep-pitched roof with cranked eaves and a cross picked out in darker tiles. Below are nine-light windows set in broad triple-keystone surrounds with herringbone brickwork panels and stone plinth below. High kneelered coping with a raised stone cross in the east-facing gable. The low half-octagonal apse to the east has a stone plinth and parapet.

INTERIORS: The vestibule space beneath the tower has a barrel-vaulted ceiling and hardwood screens to north, east and south containing panelled doors with leaded sunburst glazing. The eastern doorway leading to the main chapel has a stepped architrave containing a clock and two silhouette figures of seated children facing a cradle and the text 'Jesus could not spare them any longer'. On the reverse are two crosses and a text from the Book of Revelations: 'And God shall wipe away all tears from their eyes and there shall be no more death nor sorrow'. The chapel interior has an open-truss roof and a tall semicircular chancel arch with stepped surround. The floor of the apse is raised up three half-octagonal steps, with a vaulted ceiling above bearing a plaster relief showing angels by an open tomb beneath a central sunburst boss. The furnishings are all of polished hardwood. In the nave, collegiate seating with angular bench-ends. In the apse, central lectern with raised cross; behind, east-facing altar of stepped form reflecting that of the west tower, with a central raised 'cenotaph' bearing a raised gilded cross set against a sunburst of inlaid woods, and a small stepped pedestal supporting a crucifix. Lighting is by means of octagonal lanterns on slender wooden shafts attached to the bench-ends.

SUBSIDIARY FEATURES: The main cemetery gateway is immediately to the east of the chapel. Four stone-capped brick piers, central pair bearing stone plaques with insignia of Dagenham Borough Council, support metal gates with close-set uprights and stepped outer pilasters containing roundels. Flanking railings of similar design, on either side describing a quadrant terminating in a further brick pier, and continuing in a short straight section beyond.

HISTORY: Plans for Chadwell Heath Cemetery (also known as Mark's Gate Cemetery) were first presented to Dagenham Borough Council in 1931. At this time the borough was undergoing a huge expansion in population, thanks in part to the development in 1921-32 of the vast London County Council housing estate at Becontree. The cemetery was laid out on an unusual plan resembling an astronomical diagram, with an orbital pathway 125 metres in diameter divided internally by radial paths meeting at a circular central fountain, and three further main paths branching off at the intercardinal points with further fountains at their extremities. The chapel, which stands in a circular lawn at the easternmost point on the orbital pathway, was designed by the borough surveyor TP Francis, also responsible for the swimming baths at nearby Valence Park. Building work was undertaken in 1933-4, and the first portion of the cemetery was consecrated by the Bishop of Chelmsford at a ceremony in May 1934.

REASONS FOR DESIGNATION: The chapel at Chadwell Heath cemetery, built in 1933-4 to designs by TP Francis, is designated at Grade II for the following principal reasons:
* Architectural interest: a striking design reflecting contemporary trends in both Classical and early Modernist architecture.
* Intact interior: internal fittings and decoration of good quality, displaying a cohesive iconographical scheme.
* Landscape interest: the centrepiece to a highly idiosyncratic cemetery landscape.

The chapel at Chadwell Heath cemetery, built in 1933-4 to designs by TP Francis, is designated at Grade II for the following principal reasons:
* Architectural interest: a striking design reflecting contemporary trends in both Classical and early Modernist architecture.
* Intact interior: internal fittings and decoration of good quality, reflecting a cohesive iconographical scheme.
* Landscape interest: the centrepiece to a highly idiosyncratic cemetery landscape.