A Grade II* Listed Building in Abingdon, Kensington and Chelsea 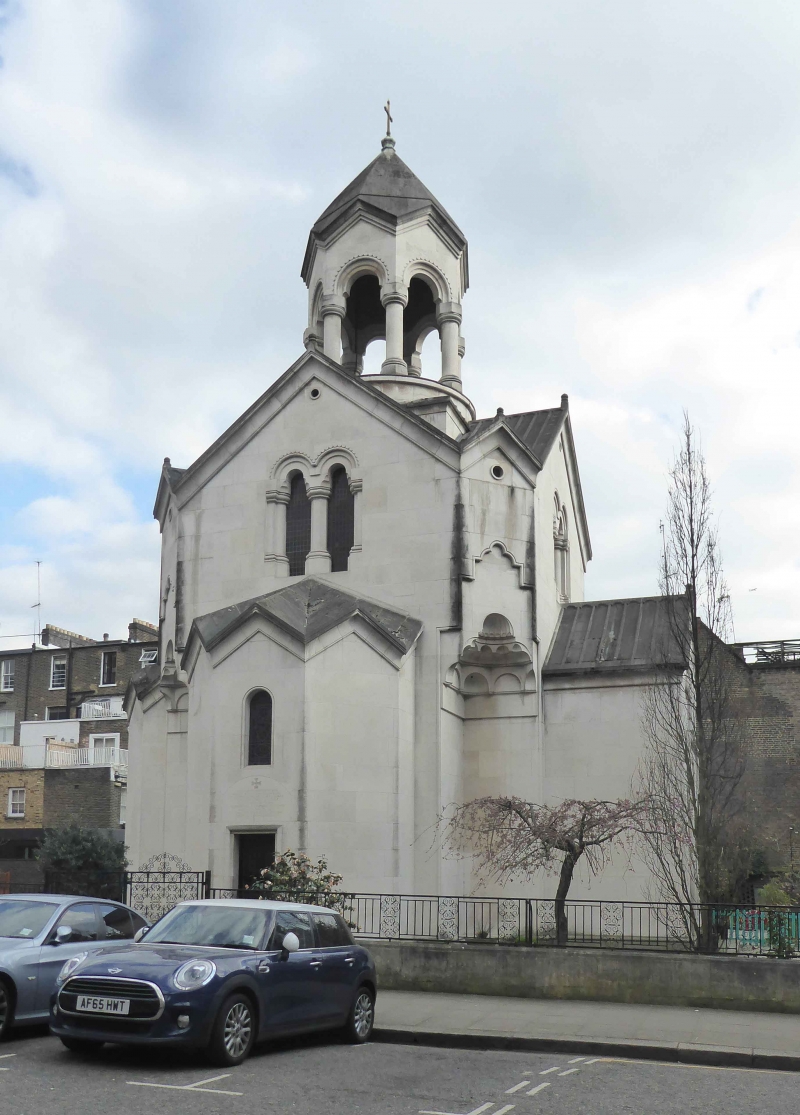 Armenian Church. 1922-23 by Arthur Davis of Mew's & Davis, with additions of 1937 and 1950.
MATERIALS: Portland stone exterior, including roof.
PLAN: Greek Cross plan .
EXTERIOR: 3-stage exterior in the Armenian style. The upper stage comprises a seven-sided open belfry with round-headed moulded arches with chunky capitals, moulded gables to the conical roof (a feature of this Armenian style), cruciform finial; set on a drum at the octagonal crossing. The intermediate stage is octagonal, with the four main gables of the crossing each having paired round-arched windows set between squat colonnettes; a tiny pierced oculus in gable apex; the roofs are of banded ashlar, unusual but copying the Armenian prototype. These bays are linked by narrow lower similarly gabled bays, creating the octagon and set above deep and decoratively moulded squinches, another typical feature of this style. At ground level the main entrance bay at W is square in plan, with a similar gabled banded roof, whereas the transept/apses on the other sides are polygonal with each face separately gabled. The entrance frontage has a tall wide square-headed concave outer moulding to a round-arched doorway in which is set a square-headed door, all with simple moulded orders; the tympanum has a long inscription in English recording the foundation of the church by Calouste Sarkis Gulbenkian in memory of his parents ' during the patriarchate of His Holiness George V Catholicos of All Armenians...in the Armenian Era 1372'; rising from the frame and filling the gable apex is a very unusual window, again a copy of its prototype, with stepped surround extending into quatrefoils to a deep set lancet. The double doors are of wood and intricately carved in shallow relief in an interlace pattern. The side apses each have a single simple deeply recessed round-arched window above a square-headed doorway, inscription in Armenian above door to N. Later SE sacristy extension in same style.
INTERIOR: Interior faced in Stuc, an applied stone aggregate, painted and scored. This contrasts with the grey clustered crossing piers to the shallow unadorned saucer dome, antae supporting the main arches and attached columns the outer orders, all with Byzantine-style capitals; grey window and door surrounds, wide rectangular outer band of interlace to the main entrance; round-arched doorways with slender shafts and tiny bulbous capitals to the side doors; carved foliage band defining the window arches and continuing at impost level round three sides, excluding piers.
FIXTURES & FITTINGS: Marble relief carving of dove descending as Holy Spirit in front of stoup or font. Fine tiered electrolier of black and gilded metal with mock candles, by the French firm of Bagu's. High E platform fronted by marble panel decorated with shallow relief quatrefoils, steps at each side. The baldacchino and altar set in the semi-circular apse is of alabaster and marble inset with onyx and lapis lazuli, the columns have gilded capitals, a sunburst over a painting of Virgin and Child and gilded relief carving of angles in the gable; it was produced by the Bromsgrove Guild. Radiators have decorative metal grilles. Inner swing doors are leather-covered. Monuments to members of the Gulbenkian family. No pews according to E Orthodox tradition - later chairs.

HISTORY: The growth of the Armenian community in London (having been concentrated in Manchester previously) led to the need for a dedicated church. A meeting led by their spiritual leader, Dr Abel Abrahamian, resulted in the purchase of this site. The oil magnate Calouste Gulbenkian advanced funds for building, on the condition that the church was dedicated to the memory of his parents, that it was designed in a traditional Armenian style, and that a board of trustees be established to run its affairs. The unusual choice of architects may also have been Gulbenkian's idea. The decoration of the church was undertaken by Paul Turpin. The church is closely modelled on the bell-tower of the monastery of St Haghpat in Armenia. Construction was undertaken by Holloway Bros., and the church was opened in January 1923, at which time the neighbouring vicarage was built. An apsidal baptistery on the north side and a new entrance were added in 1937, and in 1950 a sacristy was added; Mew's & Davis continued to be the architects to the church. The church is a very rare instance in England of an Armenian church, which is of added interest because of its architects. The exterior is highly unusual, and the interior is finely appointed.