A Grade I Listed Building in Himbleton, Worcestershire 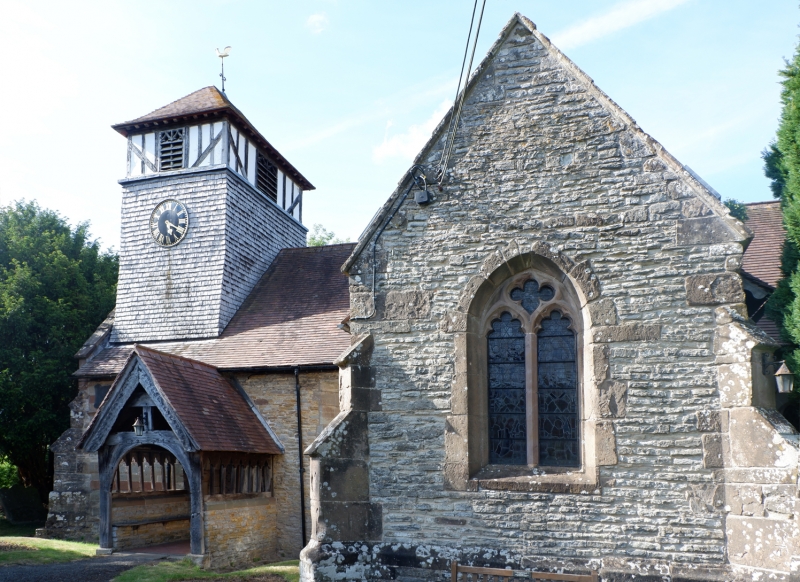 Nave: some original stonework in south wall; west and south west walls rebuilt in C15 and have stepped plinth and moulded eaves string; diagonal buttresses with off-sets at west end; three-light west window and two-light south window, both square-headed and, like similar windows elsewhere, are probably C16 with C19 repairs.

South transept: c1370 and built to house the Shell Chapel; chamfered plinth and diagonal gable end buttresses with off-sets, the south west buttress has a sundial carved on it; C14 south end and west side pointed-arched window, both of two lights, and three-light square-headed east side window.

South porch: also c1370; gabled and timber-framed with chamfered arch-braced gable end and inner roof truss, quatrefoil-panelled bargeboards and side walls with cusped arcading and brattished wall plate; south doorway has C12 jambs of two square orders with colonnettes in the angles, the west of which is C19, and a late C14 door divided by rails and muntins into quatrefoil panels.

Glass: east window contains a C13 fragment, the rest being a good C19 imitation of a c1300 style; also medieval fragments in the north west chancel window, the north east aisle window and the east transept window; the east window of the aisle is by Kempe and c1900.