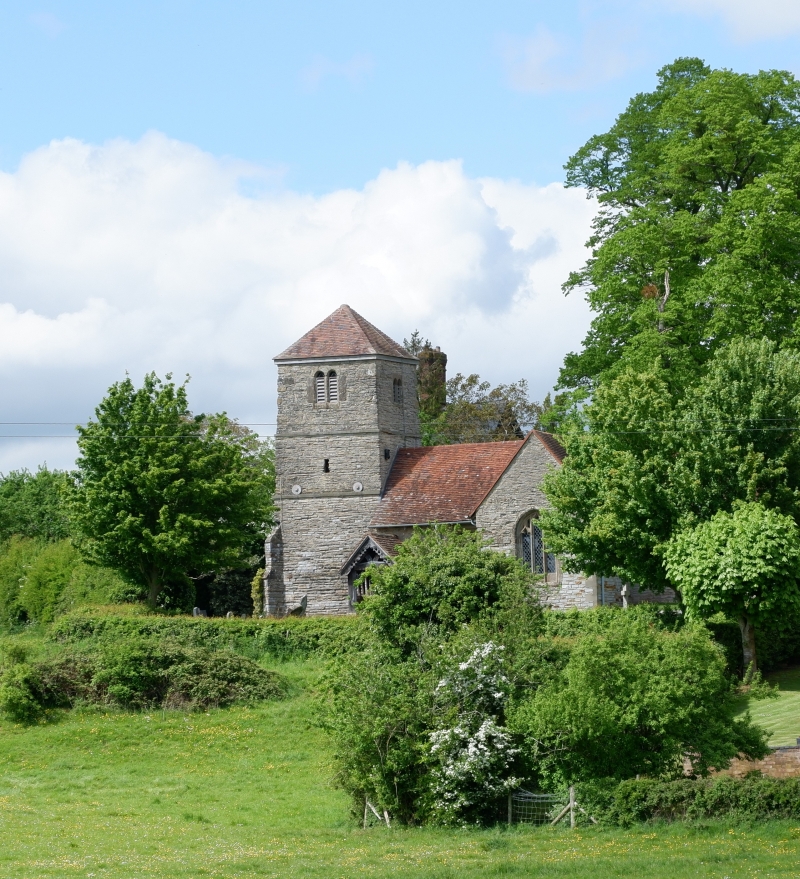 Parish church. C15, altered C17, restored 1851 by R C Hussey for John H Galton
with further alterations in 1860. Lias limestone rubble with sandstone ashlar
dressings and plain tiled roofs. West tower, two-bay nave with transepts and
south porch, two-bay chancel. Mainly Perpendicular style. West tower: C17;
three stages with strings, diagonal buttresses with off-sets at west end;
3-light west window probably original west window of nave reset when the tower
was added; second stage has small rectangular lights in its north and south
elevations; belfry stage has paired louvred round-headed lights in each eleva-
tion; above is a pyramidal roof. Nave: C15; adjacent to the tower are opposed
doorways set immediately west of low buttresses not bonded to the nave walls;
this suggests that the original nave was longer; windows of nave and transepts
are C15, square-headed and restored; north elevation has a 2-light window and
the doorway opposing the south entrance is of a single chamfered order with a
4-centred head and is now blocked; the south elevation has a 3-light window
with a similar entrance doorway. To the right of the door is a small niche
once occupied by a stoup. Transepts both have a gable end 3-light pointed-
arched window and a 2-light window in both side elevations; the west window
of the north transept is probably a later insertion. South porch: rebuilt 1860;
gabled timber-framed on sandstone base; moulded pierced and scalloped barge-
boards, arch-braced roof trusses and 5-light splayed wood-mullioned openings
each side. Chancel: rebuilt 1861; 3-light C19 east window with 4-centred head;
north elevation has a 2-light window and south elevation has a 2-light western-
most window, a rectangular light and between them a door with a 4-centred head;
all is reset C15 work. Interior: pointed tower arch and north transept arch;
no chancel arch but walls return on both sides to walls of wider nave; south
transept has a C15 moulded timber archway, the east post stands short of the
east jamb providing access to the pulpit and probably originally to provide
space for the roof-loft stair. Roofs are C19 and plastered with ornamental
arch-braced collar trusses. In the chancel two moulded corbels flank the east
window; pointed-arched piscina with corbelled basin; C17 altar rails. The
font is recut C15 work, octagonal with alternating roses and fetterlocks
carved on the lower edge of the basin. Oak pews are made up of re-used C17
woodwork. C15 dug-out parish chest in south porch and also C17 dug-out
parish chest in tower. Memorials: mid-C19 wall memorial in chancel to the
Tookey family by P Hollins; mid-C19 brass in nave to Robert Cameron Galton
formerly in Hadzor church; three ledger slabs in chancel, one to John Crump,
died 1657, one very worn slab to Bridget Patrick, died 1967, and one to
George Parker, a rector murdered in 1806. Glass: fragments of C15 glass in
chancel east window, north window and south-east window. Although much restored
this small church retains a number of C15 features of particular interest.
(VCH 3 (ii) p 459-60; BoE, p 227-8).