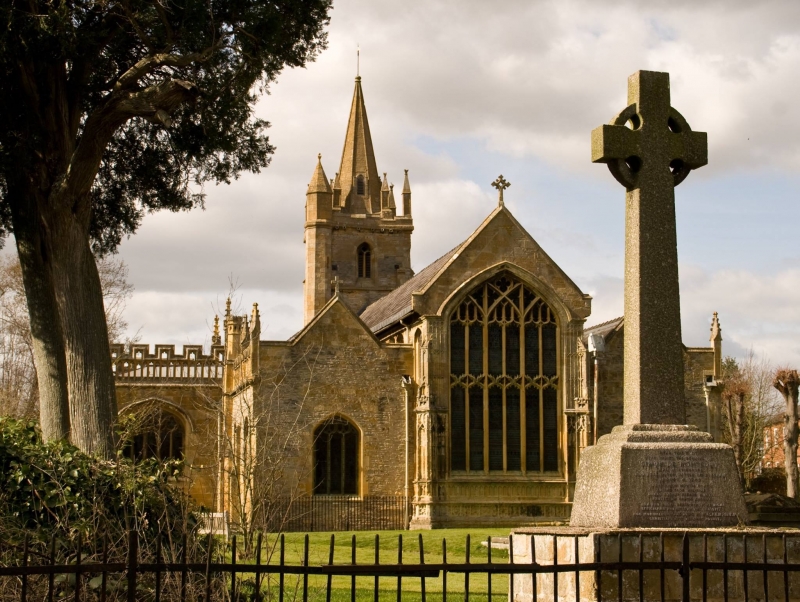 Church of England Parish: Evesham All Saints with St Lawrence

GV II*
One of two parish churches in the precinct of Evesham Abbey. The other is All Saints (q.v.). Late C15 with an early C16 S chapel. Much restored and partially rebuilt in 1837 to the designs of Harvey Eginton, following semi-dereliction. Stone rubble and ashlar walling with freestone dressings and slate roofs. Plan of clerestoried nave with four-bay north and south aisles, all approximately the same width and the aisles nearly as long as the chancel; the arcades continued into the two-bay chancel which projects beyond the east walls of the aisles as a shallow sanctuary bay. South chapel off the south aisle. West tower/porch; NE doorway.

EXTERIOR: The chancel projects forward from the east ends of the aisles by only the distance of a short bay with richly-panelled diagonal buttresses with set-offs. The east window is huge and, with the glazing in the north and south returns of the projecting bay, is almost a bay window. It has six lights, two king mullions and an arrangement of stone lozenges in place of a transom. The north and south aisles are gabled at the east and west ends with three-light traceried Perpendicular east windows. The north aisle wall (Eginton) has three-light windows with late Perpendicular style tracery, a pierced parapet and low buttresses with set-offs. The parapet has pinnacles with cricketed finials. In the second bay from the west there is an ogee-arched crocketted doorway, which projects through the sill of the window. The south chapel projects off the south side. It is ashlar with diagonal buttresses, a pierced parapet and a five-light transomed south window. The west tower has flat-faced diagonal buttresses, a south-east projecting stair turret, a parapet with pinnacles and a short stone spire of 1837. There is a moulded Perpendicular style west doorway with carved spandrels, a very large four-light west window and two-light traceried belfry windows.

INTERIOR: No chancel arch. The Eginton roof is a canted plastered vault divided into panels by moulded ribs. Tall, panelled tower arch with an Eginton stone tower screen with a brattished cornice. The tower has a plaster vault with moulded ribs and bosses at the intersections. Four-bay arcades, the north arcade an 1837 copy of the south. The piers are lozenge-shaped, the west and east shafts with moulded capitals, supporting Tudor arches. The wall above is panelled and there are pairs of cinquefoil-headed clerestory windows to each bay. Three-bay arcades between chancel and chancel chapels. Flat plastered ceilings to the aisles. The sanctuary has an 1838 stone reredos with vaulted canopies above the Creed, Lords Prayer and Ten Commandments. C19 brass communion rails with flower ornament. Screens of c. 1900 between the choir and aisles with delicate tracery carving. Matching reading desks at the west end of the choir with canopied seats. Choir stalls, probably early C20, have shouldered ends carved with blind tracery. Polygonal timber pulpit of c. 1906, carved with figures of saints and a bishop under canopies. Nave benches with square ends and recessed panels. Very worn late medieval font with an octagonal bowl carved with quatrefoils on an octagonal stem carved with blind tracery. The south chapel has a fine fan-vaulted stone roof with a central pendant. The south wall of the chapel is carved with panelling and the east wall retains two sections of decayed canopy work. In the centre of the chapel, on a floor of C19 encaustic tiles, there is a copy of the old font. Good stained glass includes the east window of 1862 by Thomas Willement, north and south sanctuary windows by Gibbs, 1864 and c. 1843; three early C20 north aisle windows by Geoffrey Webb; east window of the south aisle by O'Connor, 1847. The east window of the south chapel is by Hardman, the north aisle east window may also be the same company. Other windows of the 1930s are by Evans and Co of Smethwick and Paul Woodroffe of Stroud. Windows of the 1950s and 1960s are by A L Wilkinson and F W Skeat.

HISTORY: One of the two town centre churches which stand within the precinct of Evesham Abbey (the other is All Saints). This duality has never been fully explained, although All Saints' appears to have been the parish church for the east part of the town, St Lawrence's for the west. According to Pevsner, abbeys liked a parish church nearby, to relieve them of parish duties. Redundant since 1978 and in the care of the Churches Conservation Trust.

REASONS FOR DESIGNATION DECISION: St Lawrence's, Evesham, is listed, for the following principal reasons:
* as part of a remarkable group of medieval ecclesiatical buildings associated with Evesham Abbey
* for the quality and ambition of the late medieval fabric, having a spectacular east end ensemble and a fan-vaulted chapel.
* as the major restoration of 1836 by E Eginton (north arcade copying south, 1836 roof) in the context of a puritan tradition of worship at that date has made a positive contribution to the architectural consistency of the building.