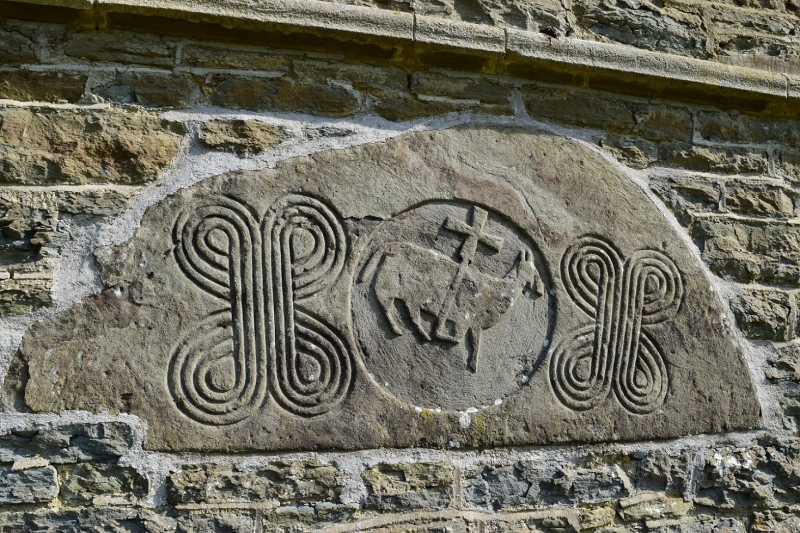 THIRTY-FIFTH LIST OF BUILDINGS OF SPECIAL ARCHITECTURAL OR HISTORIC INTEREST COMPILED
UNDER SECTION 54 OF THE TOWN AND COUNTRY PLANNING ACT 1971.

Parish church. 1859-60 by ? Bannister and incorporating a C12 tympanum
reset in the south wall of the organ chamber. Sandstone rubble with
ashlar dressings and timber-framed porch; tiled roofs. Nave and chancel
with south porch and south organ chamber. The nave has raised verges and
is buttressed to the west with a clock and small bellcote at the west end,
one plain lancet to the left and one similar lancet and large gabled 2-light
window with roundel to the right of the gabled timber-framed south porch;
curved braces to tie-beam and V-struts with scalloped bargeboards, moulded
two-centred head to the south door with attached shafts, plain capitals and
bases. The south wall of the chancel to the right is largely dominated by
the lean-to organ chamber with the C12 semi-circular shaped tympanum set in
the south wall; relief with a lamb and a cross and a niche flanked by
abstract knotted ornament. The chancel has a small trefoil headed doorway
and simple lancet to the right. The east window has three stepped lancets
with continuous hood mould and carved heads to stops. The north side of
church has two simple lancets to chancel and similar gabled 2-light window
and three lancets to the nave. Interior: four-bay nave with open-arched
braced roof with decorative members; chancel arch of two orders with grouped
shafts to inner order. C12 font, cylindrical shaped bowl with traces of
chevron ornament, renewed circular base. C19 pulpit with trefoil headed
blind arcading to sides.