A Grade II* Listed Building in Ashton under Hill, Worcestershire 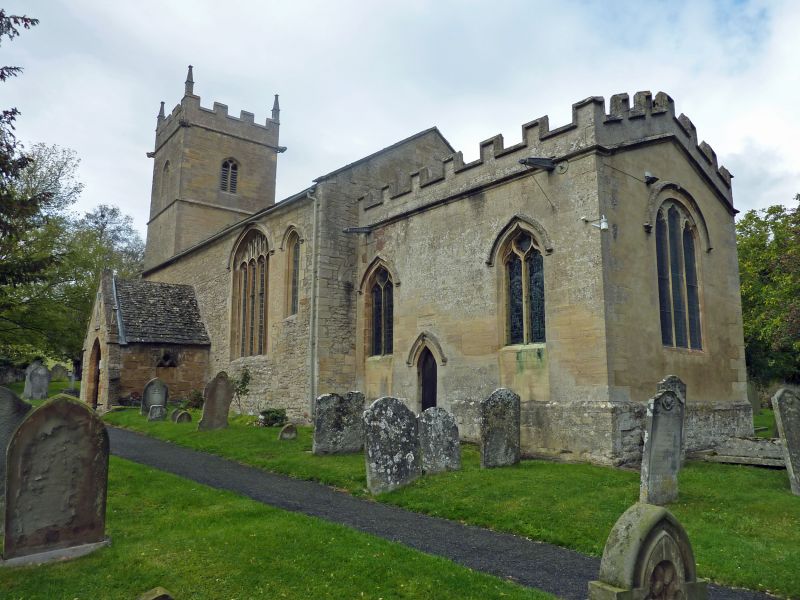 Parish church. C12 origins, altered and extended C13, C14 and c1500, chancel
rebuilt 1624 for Sir John Franklin; restored in 1868 and 1913. Part limestone
ashlar, part limestone rubble with ashlar dressings; nave has stone tiled roof,
chancel and north aisle have slate roofs behind embattled parapets. West tower,
four-bay nave with north aisle and south porch, two-bay chancel. West tower:
C13 lower stage and c1500 upper stage with strings and short buttresses with
offsets at west corners and centre of west elevation. There is a loophole in
the south and west elevations of the lower stage, a narrow pointed north doorway
and a pointed and chamfered south doorway which has a hood mould with returns
and C19 door. The belfry stage has 2-light louvred bell-chamber openings with
4-centred heads and above is an embattled parapet with corner gargoyles and
pinnacles, (the latter probably added in 1624). Nave: north aisle added in
C14 and has a lean-to catslide roof, a chamfered plinth and buttresses with off-
sets at bay divisions; at the north-east corner is a large raking buttress, dated
1820. There are three 2-light windows, one having a square head and another a
hoodmould with returns, and also a 3-light window with a 4-centred head and hood-
mould with returns in the easternmost bay. At the east end is a 2-light window
with a square head. The south elevation of the nave retains some of its C12
masonry and has a C13 cusped lancet in the western end, an early C19 copy of
this window in the eastern end, a 2-light C14 window and a large c1500 window
of four lights with a 4-centred head. The south porch is C14, has a chamfered
eaves cornice and end buttresses terminating in pinnacles of probably c1624
date. At the apex of the gable end parapet is a gabled finial supporting a
sundial. There is a pointed archway of a single chamfered order and above it
is a partly blocked 2-light window and also a loophole in the gable apex.
There are similar 2-light windows in the side elevations and within there are
stone benches and the remains of a stoup in the east wall. The south doorway
is C12 and has ballflower mouldings on the outer order of the arch. It has
single shafts with trumpet-scalloped capitals and a plain recessed tympanum.
Chancel was rebuilt in 1624. It has a chamfered plinth and the window and door
openings all have hoodmoulds with returns. The 3-light east window has a
round head and has relief carvings of the dolphins from the Franklin coat of arms
in the spandrels and lions' heads on the hoodmould. There is a 2-light north
window and two ogee-arched south windows which probably incorporate some C14
tracery. The priest's door has an unusual leaf moulding over the arch and above
it is a datestone inscribed "ANNO DOMINI 1624". Interior: the four-bay north
arcade is in C15 style with 4-centred arches and octagonal columns but may be
part of the 1624 rebuilding. The 1624 chancel arch is similar in style and
detail. The nave has a C19 king-post roof and the chancel has a barrel roof.
There is a C17 altar table and a C15 octagonal font with fleurons in quatre-
foils decorating the basin and cusped pointed panels on the stem. The pulpit
and other fittings are C19. Memorials: these are mainly to members of the
Baldwyn family; in the chancel is the remains of a 1652 memorial and there is
also a mid-C19 sarcophagus relief with draped urn. In the nave and aisle is
an early C19 and three mid-C19 memorials to the Baldwyn family and a pedimeted
early C19 memorial to the Martin family. The Baldwyn family are also commemorated
by numerous mid- and late C18 ledger slabs in the nave. Glass: there are some
fragments of medieval glass in a south nave window. The chancel windows have
C19 glass. The church was known as the Church of St Andrew until c1750. It
retains a substantial part of its medieval masonry; its Norman south doorway,
the simple but unusual detailing of its C17 chancel and its ornate C15 font are
of particular note. (VCH, Glos, Vol viii, p 249; BoE, p 71 - 2).