A Grade I Listed Building in Almeley, Herefordshire, 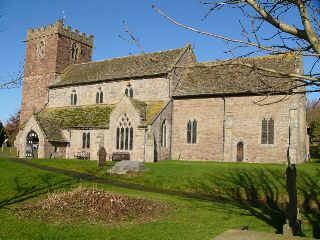 West tower is embattled with high battered plinth and three stages, the top two of which are separated by moulded strings. The three faces of the two lower stages each have a central loop. Clock face, probably early C20, above the upper loop of the north face. Each side of the top stage has a restored two-light opening with ogee head to each light and labels and head stops. The moulded string below the parapet has a diagonal waterspout to each corner. Above the upper loop of the west side is a single medieval head. Weathercock to centre of roof.

North elevation of nave has clerestory with three opposed two-light traceried windows. The outer windows have cinquefoil-headed lights; the centre trefoiled ogeed lights. All have a quatrefoil in the tracery. North aisle has a traceried west window with two flat trefoil-headed lights and a trefoil above. North elevation of north aisle has gable to left-hand side containing a large four-light traceried window. Each light has a trefoiled head and above are two rows of quatrefoils in reticulated tracery. To the right are a pair of two-light windows, each light being trefoiled and ogee-headed. The left one has a trefoil above. Between these windows is the north doorway with a pointed segmental head and a nail-studded oak door. Three weathered buttresses are evenly spaced along the wall and there are diagonal buttresses to north-west and north-east corners. Above the west end of the aisle is a C19 octagonal chimney shaft. The two-light window at the east end of the aisle has a two-centred head, two trefoiled ogee lights and a quatrefoil above. Between this window and the chancel is a newel turret to former rood loft.

Chancel has on the north side a pair of trefoiled lights, the vestry a gable containing a pair of lancets and a C19 doorway with a shouldered lintel. The east return of the vestry has a square headed two-light mullioned window. Restored east window has four trefoil-headed lights and quatrefoils in the tracery. South side of chancel has two weathered buttresses and two restored windows each with two trefoiled lights and a square head. Between is a priest's doorway with a double chamfered two-centred arch and label.

South elevation of nave is similar to that of north elevation, but with a south porch having a two-centred chamfered outer arch and a single-frame collar roof. South doorway has similar arch to outer arch of porch and a nail-studded oak door.

INTERIOR has C14 open wagon chancel roof with crested wall plates. C16 nave roof has trusses forming 6 and half bays with angle struts to ties and slopes divided into panels. The two eastern bays of the roof are boarded and decorated with large painted rosettes. Chancel has ogee headed piscina to south wall. Alongside are sedilia in cill of south-east window. Restored tomb recess in north wall has crockets. Doorway to vestry
has shouldered head.

Font is C19 octagonal with two pairs of ogee-headed panels to each face of bowl. Contemporary oak pulpit has trefoiled panels. Eastern pews have desks with C17 panelling incorporating grotesques and arch motifs. Two candelabra like that in chancel. Two matching wall monuments to either side of tower arch for Thomas and William Foley, died 1822 and 1828, with single urn to cornice of each. Wall memorial plaque to the 17 men of the parish who died from 1914-19 and six from 1939-45.