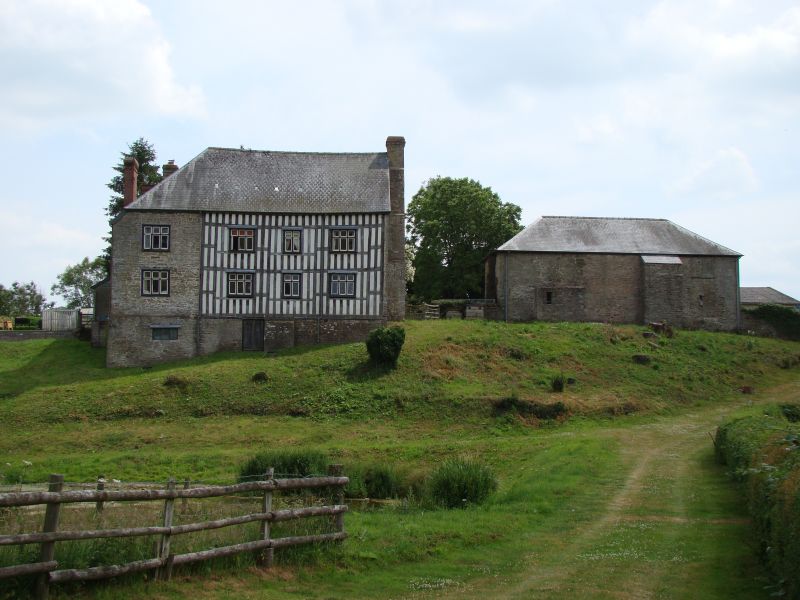 Manor house, now farmhouse and sub-divided into two tenements. Reputed
to have been built c1430 for Thomas Vaughan; on the site of an earlier
house but largely remodelled during the C17 and C18 and further altered
during the C20. Part sandstone rubble and part close-studded timber
framing with wattle and daub infill, part shingle clad (to south-east side)
Welsh slate roof. L-plan with wings aligned south-west/north-east and
north-west/south-east adjoining to north-east, entrance and stair turret
in angle of L, lateral and end stacks. Two storeys with cellars and attics.
Entrance front: shingle clad face of wing to left with one 3-light casement
window to right; two 3-light casements windows to ground floor, stair turret
projects in angle to right with one single-light and one 2-light casement
window below to left return, below the gable of the stair turret is a pro-
jection with a lean-to roof, this has a 2-light casement window to the left
return and has a stone doorway with a two-centred head and chamfered jambs.
This is obscured by a C20 lean-to porch, the stone south-west face of the
second wing to the right has two 3-light casement windows. The close-studded
timber-framing is revealed to the north-west front. Interior: the south-west
wing retains sections of late C16 or early C17 panelling with a decorative
enriched frieze to the panelling in an upper room. The early C17 staircase
has decorative splat balusters, square moulded newels with shaped terminals
and moulded handrails. The interior of the south-east wing was not inspected
but the RCHM mentions a stone fireplace of c1500. The Welsh bard Lewis Glyn
Cothi described the court as having eight strong buildings. These were
demolished during the C18. It is also reputed that the "Red Book of Hergest"
was found here from which the Mabinogion were compiled. The court was
originally surrounded by a moat. (RCHM, Vol III, p 94).