A Grade II* Listed Building in Kingsland, County of Herefordshire 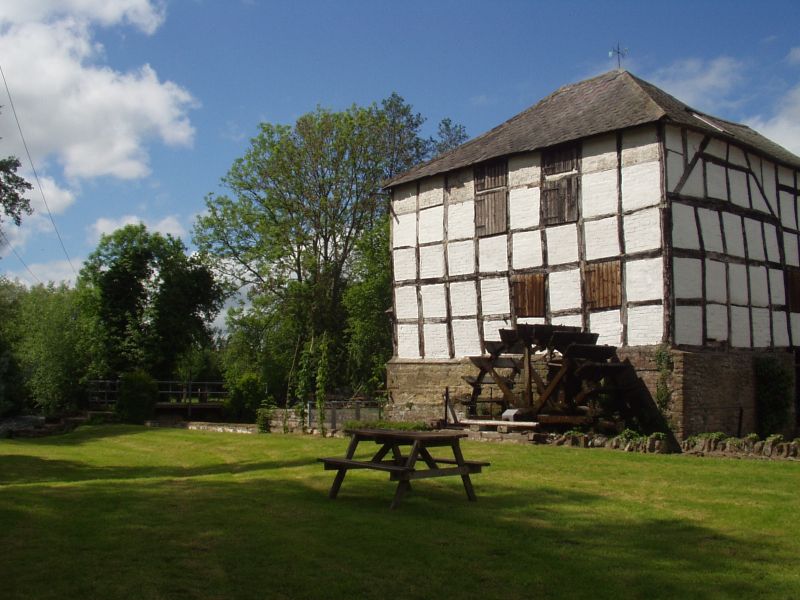 II*
A mill building of two dates in the C17, and possibly including a former domestic range of the late-C16. The building also includes a hop kiln of late-C18 or C19 date. The building is timber framed with brick infill and a rubble stone walling at ground floor level. It has a slate and corrugated metal roof. The building is L-shaped on plan and of two-and-three-storeys.

EXTERIOR: The east face has the early-C17 range to left, which has stone walling at ground floor level and 4x3 cells of small framing above and the truncated former gable end above this, which was cut when the roof was re-aligned. To the right is the later-C17 addition which also has small framing. There is a door and two, two-light casements at ground-floor level and a full-height taking-in door and hatch to the first-floor. At right again is the added hop kiln. This has a projecting stone plinth with small-framed walling to both floors. There is a wide door to the ground floor and hatch to the lean-to gable end.

The north face has the projecting hop kiln to the right. This has small framed walling. An early photograph shows the hop kiln with a stone-tiled roof, which has now been replaced by corrugated metal sheeting. Above, and behind this sheeting is the gable end of the C17 range which is small framed and clearly shows both the original gable end and revised configuration. There are hatches at both heights. To the right of this is the west wing, whose shallow-pitched, slate roof would seem to indicate a revision in the roof, or rebuilding. Timbers on the north and west sides appear to be brought from elsewhere. The north face has a door which was originally wider and is now partially blocked. The south face has the recessed, west wing at left with stone and small-framed walling. To the right of this is the original mill building with rubble walling below and 7x5 cells of small framing above, of which the top two rows of cells were added in the C18. There are hatches to both upper floors. At ground floor level the C20 water wheel is set to the right. It has a cast metal structure, with wooden blades. To left of this there are marks in the stone walling indicating the site of the second wheel which was replaced in the C18.

INTERIOR: Ground-floor rooms have heavy, pit-sawn beams to the ceiling. The timber-framed walls are exposed in the west wing. Flooring in the C16 and C17 mill is of rammed earth. The gear cage is of timber and the gearing has a combination of metal and wooden cogs, with wooden shafts. The pit wheel is of metal and connects to a wallower with wooden shaft. The great spur wheel is also of iron and so are the pinions and spindles which connect to the millstones and are mounted on timber bridge trees. A further bevelled wheel is also connected to the pit wheel and leads by a horizontal wood shaft to a wooden compass wheel which was intended to drive secondary machinery. At first-floor level the hop kiln retains its slatted loft flooring. The clover mill is set to the west in a screened area. It has a wooden casing, wheel and ironwork with damsel. The bolter has a wooden case, which is marked with the costs per bushel for grinding wheat, barley, drefing [sic] and beans. It retains its internal wooden wheel. The flooring at first-floor level has been replaced in the C20. At second-floor level there is a sack hoist. Common rafters of the roof have been replaced, and the purlins have been patched.

HISTORY: The earliest stage of the present mill building appears to date from the C16 and may have included domestic accommodation. This west wing was extended to the east in the C17 when a purpose-built mill was erected, and then extended again, northwards, in the later-C17. The roof was raised and a further lean-to added to the north in the C18. A lean-to hop kiln also appears to have been added on the north side near to this time. The present brick infill appears to date from various periods, but is mostly of the C18 and C19. The building originally had two water wheels on the south side, presumably each driving one set of stones. This configuration was altered in the C18 when a single water wheel was installed, driving three sets of stones. This probably happened at the same time that the roof was raised. In the mid-C19 parts of the wooden gear were replaced by iron made by Miles of Leominster. The clover mill and bolter appear to date from the early-C19. In the C20 the west wing, which may have originally been a domestic range, was adapted to form a playroom at ground floor level and a sitting room to the first floor. This involved the laying of a tiled floor to the ground floor and the replacement of windows, including the insertion of a large picture window to the first floor of the south face. A new water wheel was also installed on the south face in the later-C20.

REASONS FOR DESIGNATION
Arrow Mill, Arrow Green, Kingsland is designated at Grade II* for the following principal reasons:
* Historic: The timber-framed mill building dating from the C16, C17 and C18 has clear quality and has been little altered since it grew to its present shape in the late-C18 or early-C19.
* Intactness: the machinery in the mill, including the gearing for the mill wheels, clover mill and bolter, are all in good, original condition.
* Rarity: The clover mill and bolter are significant rarities, as are the rammed earth floor and the hop kiln, attached to the north of the building.
* Legibility: The functioning of the mill and the different dates of its machinery can be read with ease.