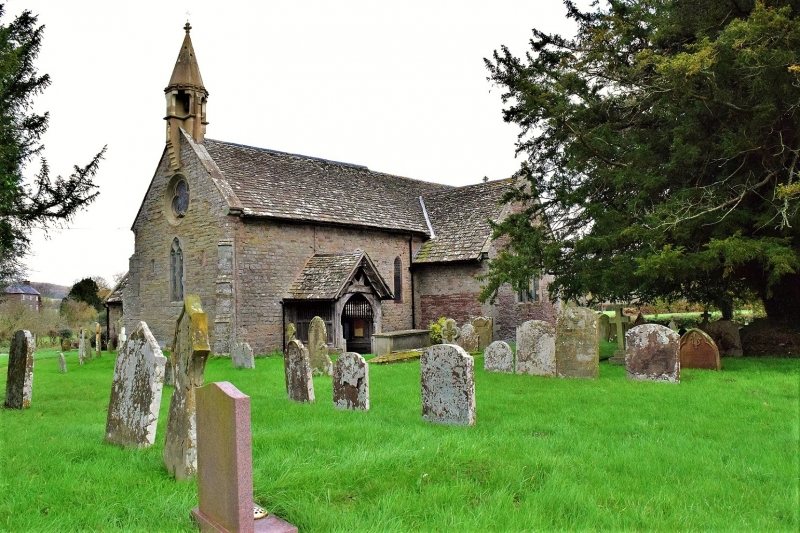 BISHOPSTONE CP -
SO 44 SW
5/1 Church of St Laurence
2.9.66
II*
Parish church. C12, extended late C13, partly rebuilt C14 and restored 1842,
1854 and 1925-6. Coursed rubble with ashlar dressings and a graduated
stone tile roof. C12 nave and C13 chancel, C13 transepts, south porch and
north vestry. Nave of three bays to south wall, south door to left has a
segmental arch of C19, with a C14 timber-frame porch with open sides, arch
braces to tie-beam at front, cusped wind-braces and trusses. Two windows
to east are lancets, eastern one of C13, the other C19. Between porch and
central window a blocked C12 window with semi-circular head. West wall re-
built C14 with diagonal buttresses. Bellcote of 1854 with two bell openings
over a niche containing a small statue. Below this a circular trefoiled
window, the main window is C14 of two ogee trefoiled lights with a trefoil
in the head under a two-centred arch. This is flanked by two small windows
with segmental heads. North wall has a C19 vestry to west end, and to the
west two lancets, that to east of C13, the other C19. The transepts each have
a window of three lights, the outer two lights pointed, the central light
triangular-headed, all under a two-centred head. The C13 chancel has one
C14 window in the south wall of two trefoiled lights with pierced spandrel
under a two-centred head, and in the north wall a C14 window of two ogee
trefoil lights. The east window is C13 with three pointed lights under a
two-centred head. Interior: the arches to the transepts are C13, two-centred
and of two chamfered orders, the inner order springing from moulded capitals
and attached shafts. C14 north door of nave (leading to C19 vestry) has
chamfered jambs and a segmental pointed head. A cinquefoil headed piscina
in south wall of south transept and south wall of chancel. Roof of south
transept is ceiled with exposed ashlar pieces below a brattished cornice.
Nave roof has a ribbed barrel vault of timber with foliate bosses and
brattished wall-plate. Chancel roof of three bays is C17, restored 1842,
has pendant king-posts, into which the two halves of the tie-beam are
morticed. The western truss has a winged cherub's head at the intersection.
All have wall posts rising from grotesque corbels. Fittings: the south
transept has early C19 box pews incorporating C17 panelling including a
carved panel bearing two monsters. A similar panel is incorporated in the
mid-C19 pews of the north transept. The hexagonal pulpit is made up from
C17 woodwork, three panels in height, with carved frieze panels, the framing
also partially enriched. Reredos in chancel incorporates a later C16/early
C17 overmantel with three male figures supporting a moulded cornice and
framing two panels bearing early C18 carved flowers and cherubs around the
initials IHS and alpha and omega. South window of chancel contains six
figurative panels of Flemish glass, C16 and C17. In north transept an altar
tomb bearing recumbent stone effigies of John Berinton (died 1614) and his
wife Joyce. (RCHM, Vol 3, pp 17-18; BoE, pp 75-6).