A Grade I Listed Building in Bridge Sollers, County of Herefordshire 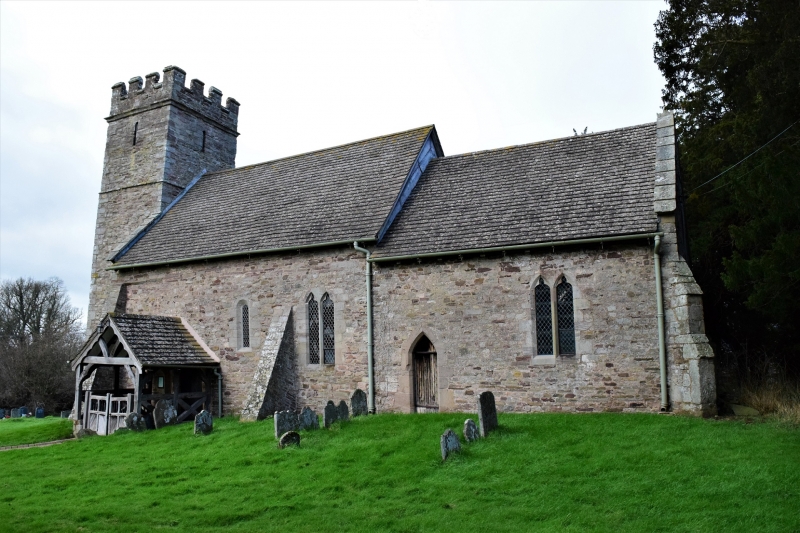 West
tower of four stages, the upper stage with offset probably C15, a moulded
cornice below the crenellated parapet. All stages have a
semicircular-headed window, save the first stage which has an ogee head. Nave: south
wall supported by two large C19 buttresses. Of three bays, with south
door to west end. It is C12 with semicircular arch of two square orders,
the inner order with incised zig-zag ornament. The inner order has moulded
imposts and the outer order has imposts bearing carved monsters. The
timber-framed porch is C19. The two windows to the east of the porch are C12 and
C13, the former a semi-circular headed window, the latter of two trefoiled
lights. The north aisle has, two windows, that to west a pointed lancet, to
east of two trefoiled lights. Between them a blocked north door with semi-
circular arch and square jambs. Chancel of two bays, within south wall
windows each of two trefoiled lights and a blocked priest's door. North
wall has windows each of one trefoiled light. The east window is of three
lights, the outer ones pointed, that in the centre with a triangular head,
all under a two-centred head.

INTERIOR: tower arch is semicircular
springing from moulded impost blocks. The north arcade of late C12 has three bays,
originally with semicircular arches, that to west distorted. The western
pier is octagonal with square chamfered impost and base. The eastern pier
is cylindrical with moulded base and abacus and a square capital cut back
at the angles. Roof of nave is of C14 common-rafter type with straight
braces to the collars and slightly raking ashlar pieces. Chancel roof is
C19 common rafter type. The lean-to roof of the north aisle is C14 with
wall posts rising from corbels. Fittings: dated 1664 with the initials
IR and RI cut on the octagonal bowl which stands on a round stem. Reused
C17 panelling of three tiers set on east wall of chancel, the panels of the
top tier bearing geometrical designs. East window contains figures of six
saints by Powell, 1871.