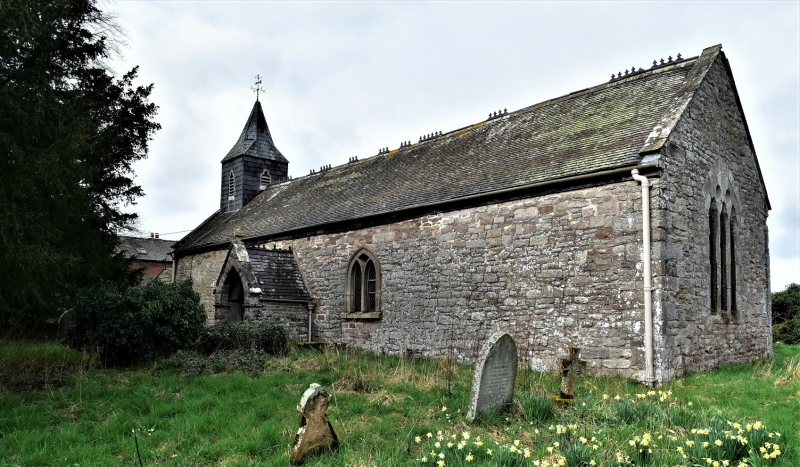 Medieval parish church partly rebuilt and refurnished in the C17, restored in 1869.

EXTERIOR: The exterior is mainly in a C19 Gothic style, although the south doorway, with continuous chamfer, is medieval. The door has early strap hinges. The south wall has two 2-light windows with Y-tracery. The north wall has one similar window, and several blocked openings, including a nave doorway. Blocked windows include a narrow window that could be C12, and windows in chancel and nave, of which the square head of the latter has survived and is probably C16. Another vertical joint indicates that the nave has been extended westwards. The east window is 3 cusped lights with blind trefoils under a relieving arch. The timber-framed west belfry is now slate hung. It has cusped bell openings and splay-foot spirelet.

INTERIOR: The nave has a roof of closely spaced rafters and is probably medieval. The 2-bay chancel roof (with 3 trusses) is C17, and has moulded tie beams on brackets, and raking struts. Walls are plastered, including a plaster partition at the west end of the nave, which has a pointed panel door, separating off a narrow space for bell ringing. The floor is tiles, including encaustic tiles, with raised wood floors beneath the pews.

PRINCIPAL FIXTURES: Many of the furnishings belong to the C17 and C18, chief of which are the chancel screen and pulpit. The screen is of hybrid style with panel dado, Gothic pointed arches and trefoil spandrels, below a panelled entablature. The pulpit, with tester, is square with round-arched panels, and has an attached reading pew. In front of it is a lectern formed by two mirrored stylised scrolls with eagle heads (also used on the tester) on the front pew. The nave has a panelled dado which is an integral part of the panelled benches, of C17 or C18, which includes one box pew on the south-east side. The choir stalls have moulded ends and fielded-panel backs. Communion rails have turned balusters, but their effect is marred by the glazed-tile chancel dado that is out of place with the earlier work. Commandment boards are on the east wall, and Lord's Prayer and Apostle's Creed are on the west wall. The font is a round freestone bowl with a marble basin, on a black marble stem. There are several simple C19 wall monuments, including a brass plaque to John Morley (d 1899), who restored the church.

HISTORY: The church is medieval in origin, evidence for which is the south doorway and a possible blocked Norman window in the north wall. Interior detail such as chancel roof, screen and pulpit indicate rebuilding and refurnishing in the C17. The church had a bell turret at this time, as it has one late C16 bell and another cast in 1709. The church was restored in 1869 under the aegis of John Morley. The church became redundant in 1980 and has been in the care of the Churches Conservation Trust since 1984.

REASONS FOR DESIGNATION:
The parish church at Moreton Jeffries is listed Grade II* for the following principal reasons:
* For its substantial pre-1800 fabric, including medieval and C17 roofs.
* It has a complete range of high-quality C17 and C18 fittings, including a pulpit, screen, pews and communion rails.