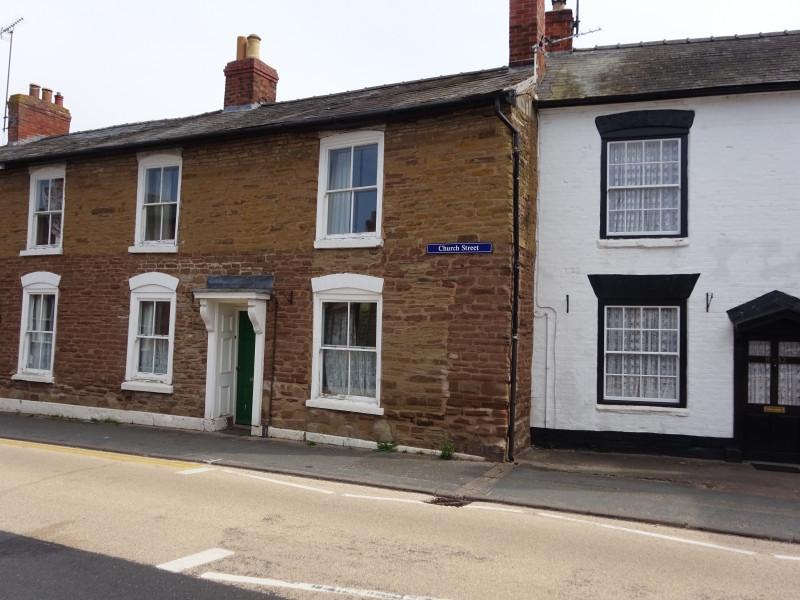 II
A house with a colourwashed brick front, of C18 or early C19 date, which masks an earlier, timber-framed structure. The gabled roof is covered with slates. The building has two storeys.

EXTERIOR: The street front is recessed from the pavement and extends across the full width of its plot. To the right of the ground floor is a plain wooden door which leads, via a passageway, to the rear of the property. At left of this is a three bay, near-symmetrical front. The door, which is slightly to the left of centre, is half-glazed with a moulded surround and pedimented hood, supported by shaped brackets. At either side, on both floors, are 16-pane sash windows with painted brick lintels and painted sills.

HISTORY: Bromyard is a small market town that was first recorded in circa 840. No.14 Church Street is situated on one of the principal thoroughfares in the town, joining the church with the market square. It continues south into Sherford Street, and together they were known as Verterus Vicus in the late C13 and recorded as Shurford Streate in 1575. This central area of the town to the south of the church and around the market place appears to have been fully built up by the early C17, though some of the plots have been re-developed since that time.

REASON FOR DESIGNATION:
No.14 Church Street is designated at Grade II for the following principal reasons:
* Architectural: the building has an attractive front of late C18 or early C19 date, which contributes to the pattern of other, similar buildings in the town
* Historic: behind the facade is a timber frame which also matches other examples in the town and which adds to the historic interest of the property
* Group Value: No. 14 is one of a number of listed buildings along Church Street