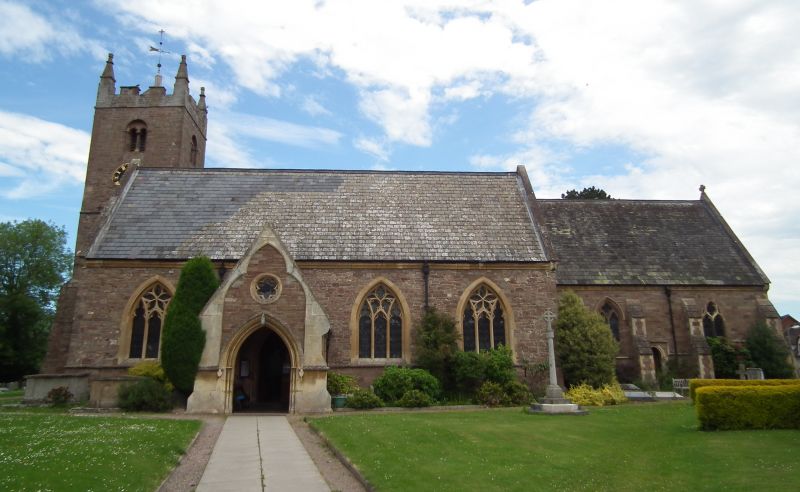 Parish church. Mid-C12, altered and extended C14, part rebuilt late C18,
restored in 1864 by Woodyer with further late C19 additions. Part ashlar,
part coursed rubble with ashlar dressings. Slate roof and gable-end parapets
with kneelers and cross-finial at east end. West tower, four-bay aisled nave
with south porch and four-bay chancel with polygonal organ chamber and lean-
to vestry. West tower: C12. Three stages divided externally by a single
central string course. Angle corner buttress to north-west and south-west.
West elevation has a C19 round-headed doorway of three chamfered orders,
the central one having detached jamb shafts with trumpet-scalloped capitals.
There is a round-headed window above and on the south side. There is also
a clockface on the south side. The bell-chamber openings are C12 and have two
round-arched lights with chevron moulded heads recessed within semi-circular
arches. Above is an embattled parapet with corner pinnacles (probably C17),
a shallow pyramidal roof and weathervane. Nave: aisles probably date from
C14 but mainly rebuilt late C18. Both are gabled and have chamfered plinths
and moulded eaves cornices. The north aisle has a west corner angle buttress
and buttresses with offsets at the bay divisions along the north elevation.
There is a 4-light west end window, three 3-light north windows (the window in
the third bay from the east end has a C18 wall memorial to the Phillips family
adjacent to it) and in the westernmost bay of the north elevation is a late C19
cusped lancet in a rectangular opening and a doorway with a shaped head. South
aisle has no buttresses but a similar 4-light west end window, three 3-light
south windows and a 3-light east end window. The south porch is late C19 and
gabled with offset buttress and a parapet with kneelers at its south end.
There is a pointed archway with nookshafts and a hoodmould with shield stops.
The hoodmould returns to form a string around the buttresses. Above the arch-
way is a rose window and both this and the archway are set within a blind pointed
cusped recess rising above string level. The chancel dates from the C14 and has
a chamfered plinth and a sill string. The east end has been refaced or rebuilt
and has end buttresses with offsets (angle corner buttress to south-east) and
a small central buttress. There is a 5-light east window and a cusped lancet in
the gable apex with a hoodmould and block stops. The south elevation has
buttresses with offsets at the bay divisions, three 2-light windows (the two
westernmost probably have C14 external jambs) and there is a pointed doorway
between the two easternmost windows above which the sill string is stepped to
form a hoodmould. The north organ chamber is late C19, and forms an apsidal
termination to the north aisle. Two levels separated by a string. The lower
level has 3-light window with a square head to the north and the upper level
has a cusped lancet to the north, north-east and east faces. The vestry is
also late C19 and has a lean-to catslide roof. The north elevation has a 2-
light and a single-light window with square heads and a doorway with a shaped
head and there is a 2-light east end window. Interior: the nave arcades are
C19 and have pointed arches on quatrefoil plan columns and a continuous hood-
mould with foliated stops. There is a similar lower arch and the chancel arch
is also C19 and of two moulded orders, the inner of which is supported on
corbels. There is a four-centred archway from the chancel into the organ
chamber and a pointed doorway to the vestry. At the east end of the north
aisle a two-bay opening with a central marble column and pointed traceried
window above leads into the organ chamber. Chancel, nave and aisles have
C19 open timber trussed roofs. There is a C14 cusped pointed piscina and
aumbry in the chancel and a small rectangular recess with a door high up
in the north wall. The circular stone font and five-sided stone pulpit with
figure reliefs are C19. The C19 west gallery occupies the full width of
the church and is supported on cast iron quatrefoil columns. There is a
C17 (?) parish chest in the north aisle and also part of an Anglo-Saxon cross
shaft and some architectural fragments from the Norman church. Memorials:
in the chancel is a canopied Easter Sepulchre with flanking pinnacled buttresses
of circa 1330 (the western pinnacle has a notched projection which may have
supported the rod for the Lenten veil). The recess contains a miniature effigy
of a cross-legged Knight holding his heart - probably the memorial of a heart
burial. Also in the chancel is a large obelisk wall memorial with the relief
of a woman draped over a column by Bacon Jun and Manning for William Godson,
died 1822, and an illegible memorial with a broken segmental pediment, an
urn finial and flanking pilasters. Below the south-east window of the south
aisle is a shallow arched recess containing the effigy of a large cross-legged
knight of circa 1300, possibly John or Robert Sturmy of Sutton Sturmy. Also
the east end of the south aisle is richly detailed alabaster tomb chest with
tapering Ionic pilasters and ovals in the panels surrounding coats of arms
and figure reliefs. Upon the chest lie the effigies of Thomas Acton of Sutton,
died 1546 and his wife, Mary, died 1564. The tomb is dated 1581 and is
particularly well detailed. Also in the south aisle is an obelisk shaped
memorial to Thomas Noxon, died 1809, an oval memorial to Edward Downes,
died 1787, by W Stephens, the Blakeway memorial of 185? and a memorial to
Thomas Wall, died 1814, with a draped urn relief. The north aisle has a
large shield-shaped memorial to Edward Wheeler, died 1820 and a sarcophagus
memorial to the Morris family, erected in 1837. (VCH, IV, p 368-70; BoE,
p 277-8). -