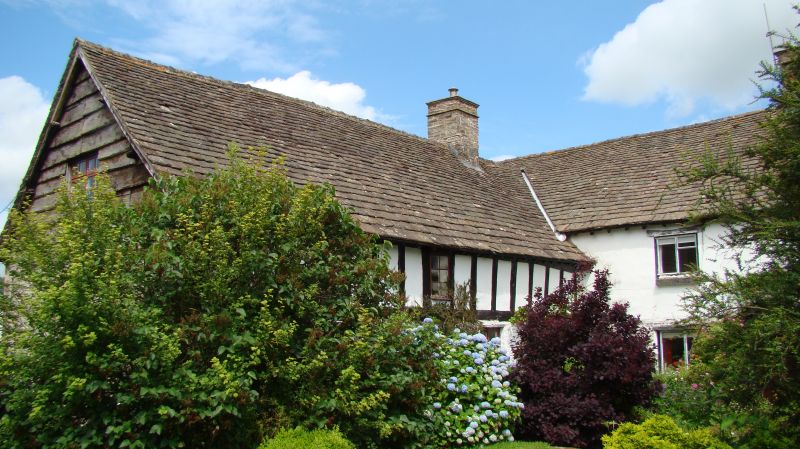 BRILLEY CP -
SO 24 NE
5/14 Lower Bridge Court
(formerly listed as
19.8.53 Lower Bridge Court
Farmhouse and attached barn)
GV II
Farmhouse, now house. Circa 1600, with mid-C19 and late C20 alterations.
Timber-framed with rendered infill on rubble base, partly rendered and
weatherboarded with some rubble walling and refacing; stone tiled roof laid
in diminishing courses with rubble ridge stacks. L-plan; main range of four
bays aligned north/south; third bay from south end is a chimney bay with a
lobby entrance and southern end was formerly used as a stable and granary.
A west wing of three framed bays adjoins the north end bay and has a large
chimney at the junction with the main range (the wing was formerly used as a
cowhouse). Two storeys. Framing: main range has two rows of square panels
at first floor level; cross-wing has one row of rectangular panels at first
floor level. West front elevation: main range has C20 casements. There
are three 2-light windows on both floors. Main entrance has a C20 gabled
timber porch and door. West wing has a 2-light window on both floors at its
gable end. In the angle there is a 2-light and a single-light window on the
ground floor and two first floor single-light windows. At the rear north end
of the building is a lean-to rubble outshut with a catslide roof. Interior:
main ceiling beams are stop-chamfered. There is a large fireplace and bread
oven in the west wing. (RCHM, III, p 25, item 21).